By Polly Saltonstall You know a place is special when a boat is named for it. That's the case with the Rangeley Lake region in Western Maine, home to the Rangeley Boat. Out-of-staters in search of fresh air and great fishing began flocking to the region's chain of pristine lakes in the mid- to late-1800s. These visitors stayed in local inns and fishing camps and hired local residents as guides. And they went out on the water in locally built wooden boats.

Much has been written about these boats, which are known as the Rangeley Boat. John Gardner includes plans in his 1997 book, Building Classic Small Craft. The late Maine humorist John Gould, who owned one built by Rufus Crosby, mentioned it in several different essays. Stephen Cole's book, The Rangeley and Its Region: The Famous Boat and Lakes of Western Maine, is also a great reference. Most maritime museums with boat collections include a Rangeley Boat. Several builders still make versions today.

The Rangeley Outdoor Sporting Heritage Museum plans to open an outdoor monument to the design this summer (2015), with an opening ceremony set for June 6. The museum hopes to celebrate the boats again in the fall on September 12, with the Inaugural Rangeley Regatta. Regional middle school students will compete in both boys and girls divisions in rowing races in classic Rangeley boats on Oquossoc Cove, according to the museum's Executive Director Bill Pierce. Students will also represent their schools in canoe and kayak races, fly casting, fly tying, archery, and other contests. For more information, email info@rangeleyoutdoormuseum.org.

The first Rangeley Boats were constructed in 1869 by local craftsmen for the early members of the Oquossoc Angling Association. A "Mr. Ball" and Luther Tibbetts, who would later become Rangeley's first full time boatbuilder, were hired by the members of the association to build six "Indian Rock" boats, Pierce says. The name "Indian Rock" originates from the area around the confluence of the Rangeley and Kennebago rivers, which is where the angling association's camp was located. These first boats were modified from the lines of a St. Lawrence skiff-style rowboat from Ogdensburg, New York, which was lapstrake and relatively flat-bottomed. Modifications were made that better suited the sometimes shallow and rough water conditions found on Rangeley's big lakes.

As the boat grew in popularity with regional guides, demand increased and additional builders began producing the boat that was to be forever known as "The Rangeley."

Although some were shorter, Rangeley boats were generally 17 feet long, and intended to be rowed by a guide with a couple of sports. Many of the local lakes were quite shallow and could be quite rough, which meant the boats had to be sturdy in a strong chop. Eventually the double-ended lapstrake model became the standard. They usually featured half-round steam-bent ribs, two-piece keels and two-piece stems, Gardner wrote. Similar to Adirondack Guideboats, the oarlocks completely encircled the oars, which allowed a guide to drop the oars to land a fish without worrying about oars floating away. Rangeley Lake Boats are noted for their unusual thwarts. There is a raised round seat in the center, like the top of a stool. This helped keep the sport centered in the boat while fishing, and allowed room for a tray of fishing gear on either side, according to Penobscot Marine Museum Curator Ben Fuller. The relatively flat bottom gives stability for cross-boat fly-casting. When outboard motors came along, most of the old boats were squared off at the stern to accommodate power.

Eventually, these iconic watercraft were built by many different people in great numbers, and versions of the Rangeley boat were exported to many other lakes around Maine. As the Outdoor Sporting Heritage Museum notes on its monument to the boat: "The Rangeley Boat is an 'American Original.' It is an authentic representation of nautical history that will forever... be intrinsically linked to Rangeley and to Maine's North Woods."

These images of the Rangeley Lake region come from the collection of the Penobscot Marine Museum in Searsport. The Museum’s photo database is searchable by keyword and we highly recommend checking it out, just be sure to leave yourself plenty of time because the images are fabulous. 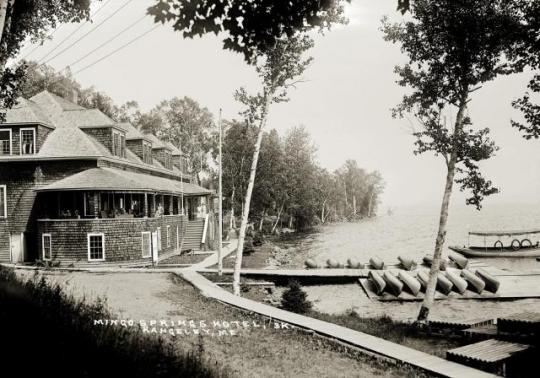 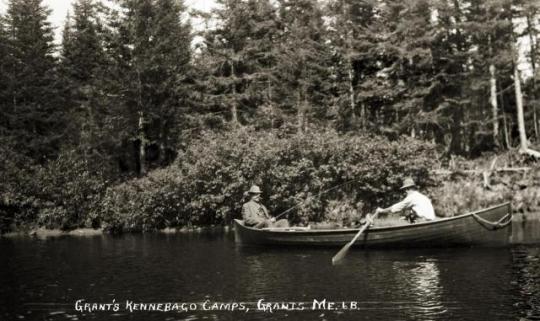 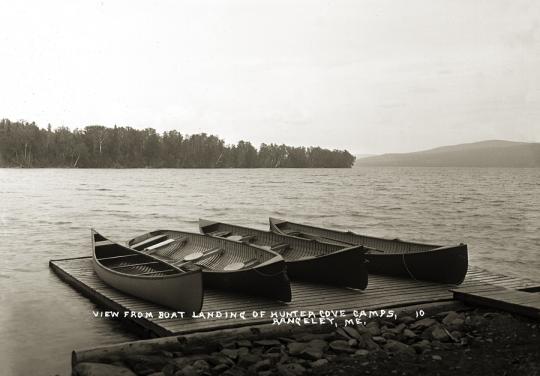 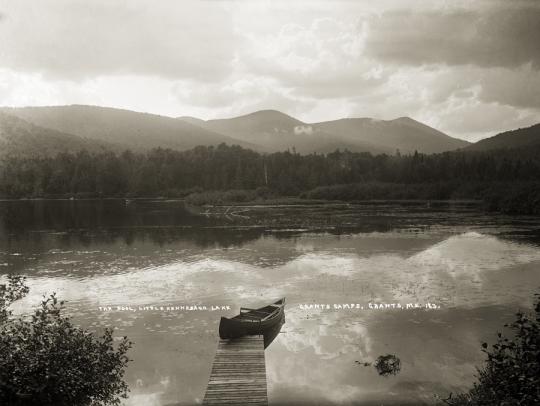 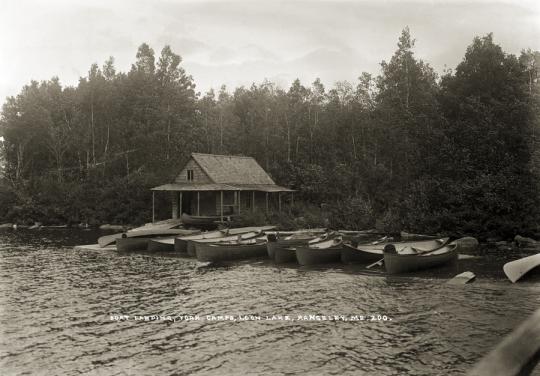