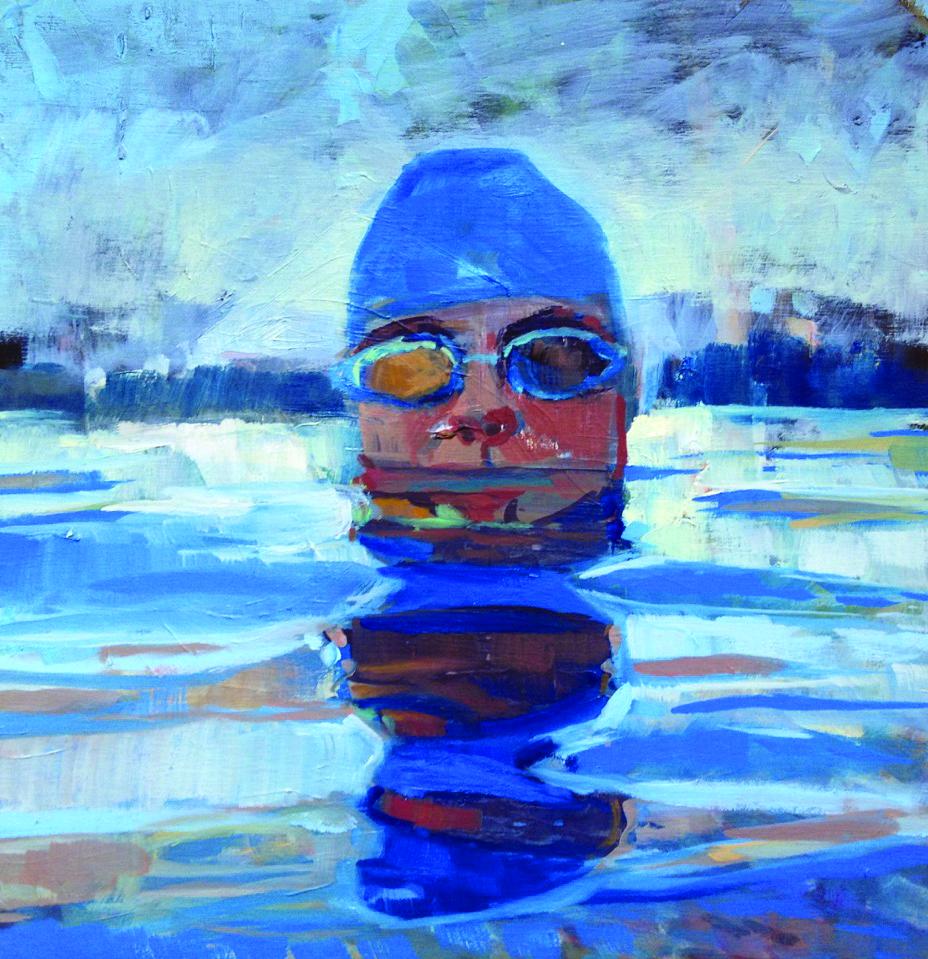 Ives is an avid long-distance swimmer and has painted many images of people swimming from different perspectives. This 10" x10"­ oil on panel is titled Swimmer Self-Portrait: Stripes. Clicking the “search all paintings” tab on the home page of the website for artist Jessica Lee Ives opens a link to a word cloud of diverse subjects and categories. Activities like surfing, kayaking, swimming, fishing, and hockey bump against place names such as Screw Auger Falls, Costa Rica, and Acadia.

Images pinned to the wall of her studio in Damariscotta reflect a similar diversity. Ives hangs paintings that are still in progress to that six-foot span, as many as 20 at a time, in order to get a sense of how the works play off against each other. Last March, the wall included light-filled images of apprentices working on boats at the Carpenter’s Boat Shop in Pemaquid; deckhands and passengers on the Hardy III, which travels between Round Pond and Monhegan; and people on Monhegan.

These new images are a departure from the more recreational subjects in her previous paintings. They are a collaboration of sorts with her husband, Jonathan Ives, who teaches at the Carpenter’s Boat Shop and is a captain of the Hardy Boat Cruises that operate out of New Harbor.

Almost There, 10" x 22" oil on panel, shows passengers on the Hardy III headed to Monhegan. 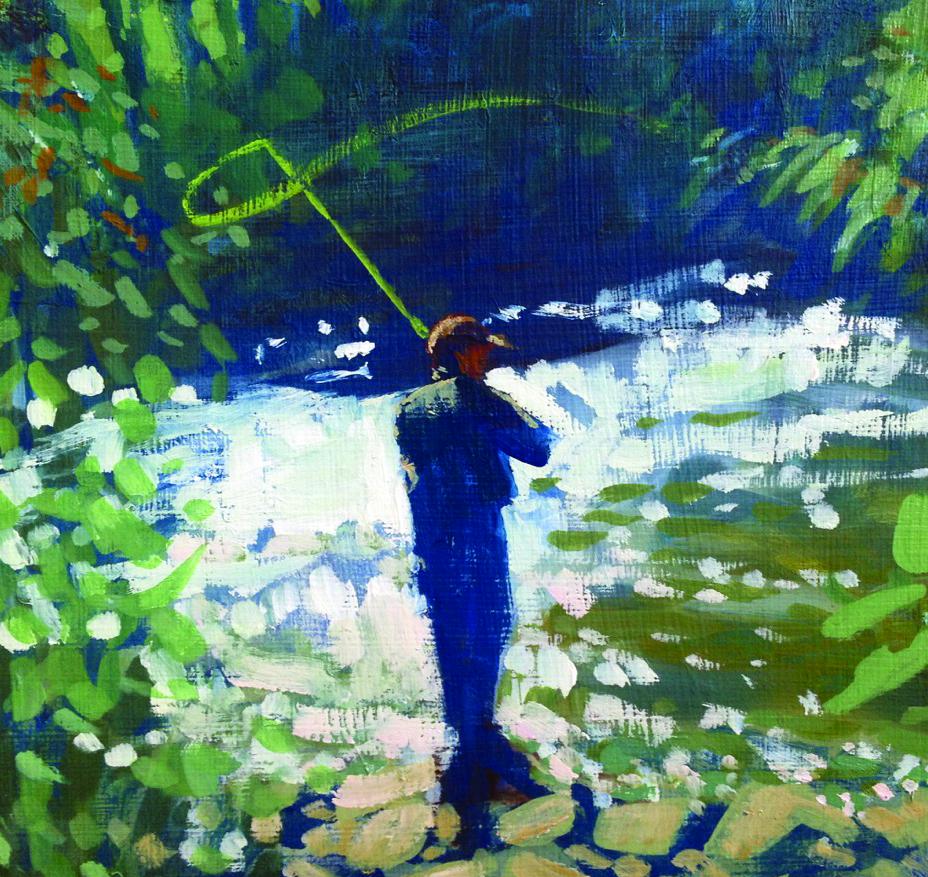 Grace, 6" x 6" oil on panel, was inspired by a fishing trip Ives took with her father. The paintings, many of them small, resonate with bright color, blues of water and sky, reds of clothing, greens and oranges.

An athlete who enjoys swimming, hiking, mountain climbing, and paddle boarding, Ives paints people experiencing the outside—swimmers cutting across the water, a surfer bearing his board toward the waves, snowboarders resting on the slopes, a man casting a fly over a river. The works are like free verse, expressive yet disciplined, and always based on places where Ives has spent time. 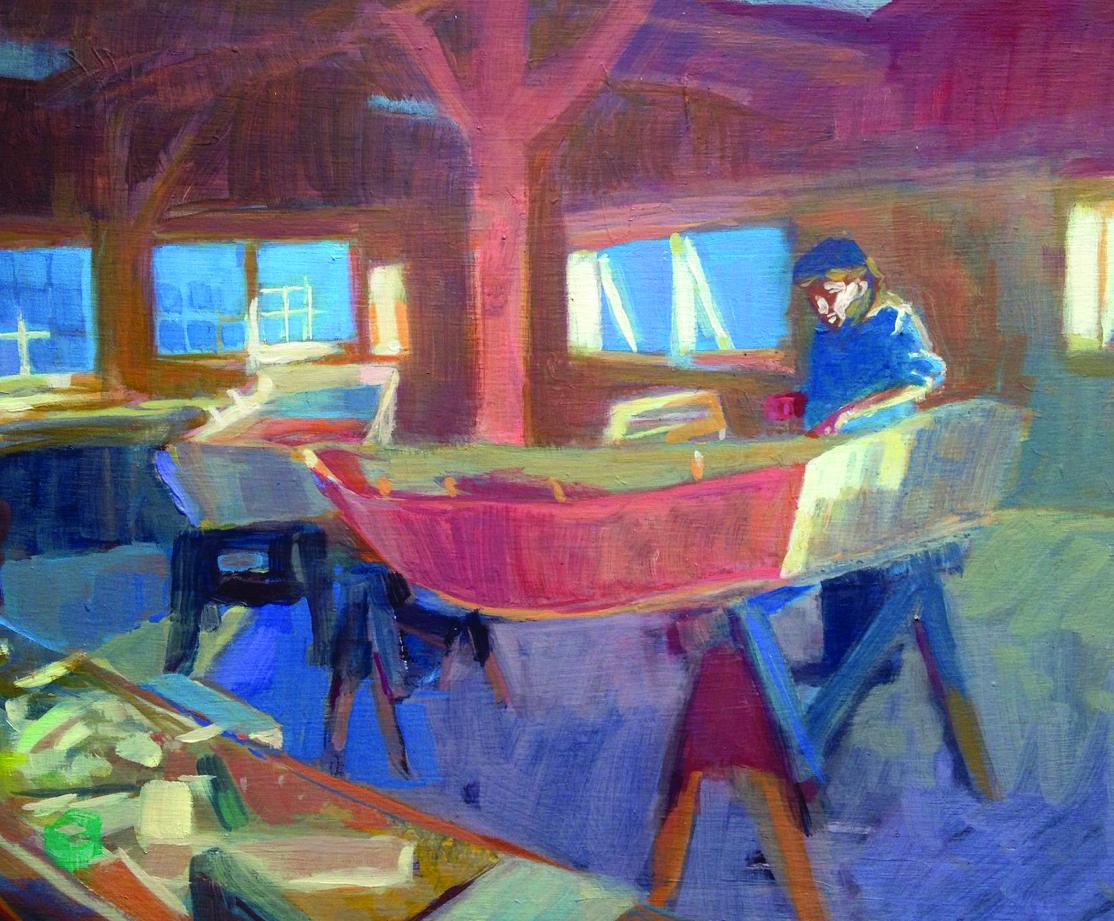 Afternoon Apprentice, 8" x 10" oil on panel shows the Carpenter’s Boat Shop in Pemaquid. The paintings of swimmers relate to Megunticook Lake in Camden, where she spent her formative years. Born in Portsmouth, New Hampshire, she lived in west central Ohio until third grade when her family moved to the Camden area. Over the years, Megunticook has become a touchstone, both physical and spiritual, and a favorite painting subject.

Ives is a long-distance swimmer. Every summer she and some of her friends swim the length of Norton Pond, through the narrows to Megunticook Lake, and then to the end of that lake at Barretts Cove—about six miles total. (On her website you can watch a short video showing Ives and a friend swimming in Penobscot Bay from Ducktrap Harbor in Lincolnville to the Grindle Point Lighthouse on Islesboro.)

Ives has spent quite a bit of time on Monhegan Island where the Lupine Gallery will have a show of her work this summer, including the scene above, Hot Harbor, Monhegan, 20" x 48" oil on panel.

The paintings of snowboarders are based on outings to Black Mountain in Rumford and Saddleback in Rangeley. The fly-fishing images are the result of expeditions to the Rapid River in far western Maine. An outlet of the Rangeley Lakes, this 3.2-mile stretch of river offers some of the best brook trout fishing in the northeast.

The figure casting the line is her father, Tom Stammen. A teacher and former business manager in the Camden schools, he helps his wife, the award-winning children’s book illustrator Jo Ellen Stammen, run her shop Jo Ellen’s Designs, in Camden. The store features textiles, including rugs, designed by Stammen, along with beautifully displayed books, soaps, jewelry, housewares and other items.

“My mother opened that store when my brothers and I got out of the house, off to college,” Ives noted. “That was her baby when all of her babies were gone.”

The couple showed faith in their daughter’s artistic ambitions early on. Ives had taken a private oil painting workshop while in high school and fell in love with it. She proposed a pact with her parents: would they allow her to paint as a summer job instead of working in a local deli? And if she sold the equivalent of her pay at the local arts and crafts festival in the fall, would they let her paint every summer? They agreed, she sold well (thanks to a supportive community), and painting became her passion.

While she cut back on athletics and other activities at Camden-Rockport High School in order to paint, Ives never lost her interest in sports. During college at Cooper Union in New York City, she and fellow Maine painter Colin Page were the only students from the art school to play on the basketball team. They were also among the few painters doing representational work. Page, who was a senior, suggested courses to his first-year friend, including a painting class with Susanna Coffey, who became a mentor.

Ives was in the city when the attacks on the World Trade Center occurred. She had been working at St. Paul’s Chapel near Ground Zero. When she finally was able to return, she helped in the recovery. As artist in residence at the chapel she directed various projects, including the creation of memorial communion chalices using salvaged steel from the Twin Towers.

Partially as a result of this experience, Ives went on to get a Master’s degree in art, religion, and public service at New York University—“a little bit of a tangent,” she recalled, but one that added meaning to her life. She launched the 9/11 Debris Project in 2007, commissioning 50 artists and writers, a number of them from Maine, to “re-imagine” individual pieces of paper salvaged from Ground Zero for inclusion in a large-scale piece.

Ives returned to Maine in 2008, needing to clear her head. She recalled struggling with her work: “I was standing behind an easel and I was just getting antsy about not being in the water I was painting, not being on the trail I was painting.” She turned to the camera as a way to, in a manner of speaking, have her swim and hike and paint them too. 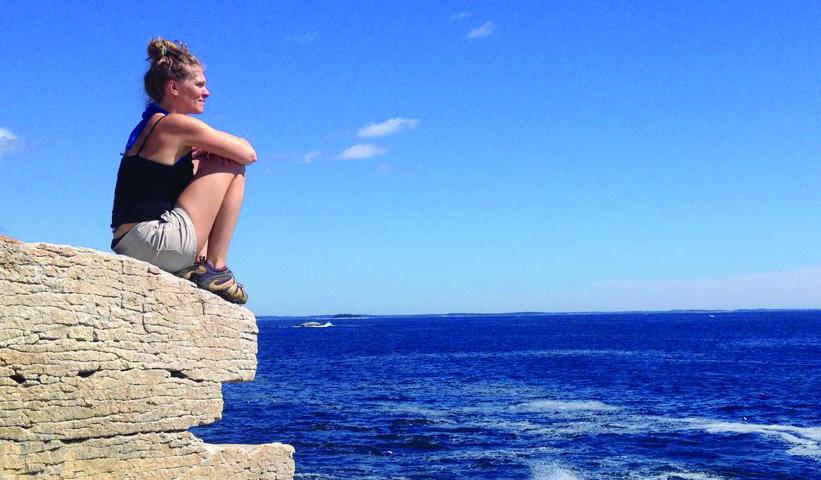 Ives experiences the outdoor scenes and activities that she paints.Photo by Jonathan Ives While her paintings have the look of someone working en plein air, Ives works from photographs, using these images to rekindle the sensory experience, “the quality of light on my skin, the water or air holding me in place, feeling and hearing my board on icy New England slopes, the whole body thrill of wonder, of being able to move and play and be,” she explained. “I believe it’s utterly important that these experiences are registered in my entire body, not just my eyes.” 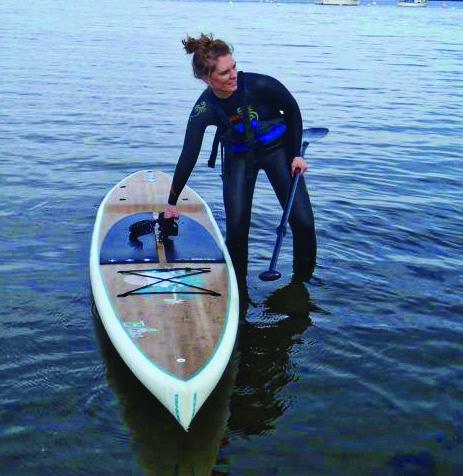 Photo by Jonathan Ives Ives’ work has been included in the Art in the Embassies program and has been shown at the Center for Maine Contemporary Art (including its 2006 Biennial), at the former 10 High Street Gallery in Camden, at Pascal Hall in Rockport, and in a solo exhibition in the Blue Gallery at Bowdoin College last year.

Like many Maine painters, Ives juggles several enterprises at once. In addition to teaching painting and color theory workshops in the mid-coast, she curates “The Maine,” (www.themaineblog.com), a blog where writers and artists share thoughts about her favorite state. Every Tuesday on the blog, she offers for sale a new four-inch by four-inch painting. The price of $207 is inspired by the state’s area code. These “207 Paintings” depict “the land, the light, and the people that make this state a state of wonder,” she explained. 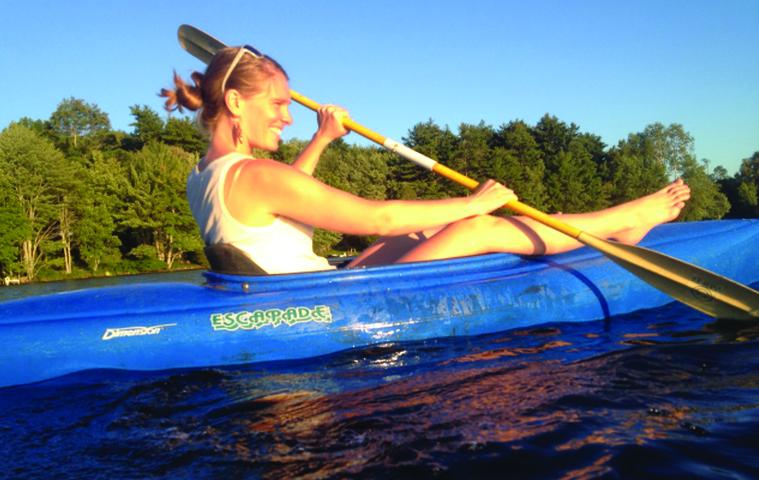 Photo by Jonathan Ives Ives considers Maine “a beautiful place of convergence.” She explained, “So much of what we’ve looked at and built our pictorial reservoirs out of, both as individuals and as an American culture, can be found here: the rocky coast, Monhegan, Prout’s Neck, Acadia.” This landscape can “speak deeply to people in ways they may not even realize.”

Being an artist in Maine, she said, is “both an advantage and an honor.”

Jessica Ives is represented by Gleason Fine Art in Boothbay Harbor and the Courthouse Gallery Fine Art in Ellsworth. You can also find her work at www.jessicaleeives.com.