Great Island builds a reputation for refits and service 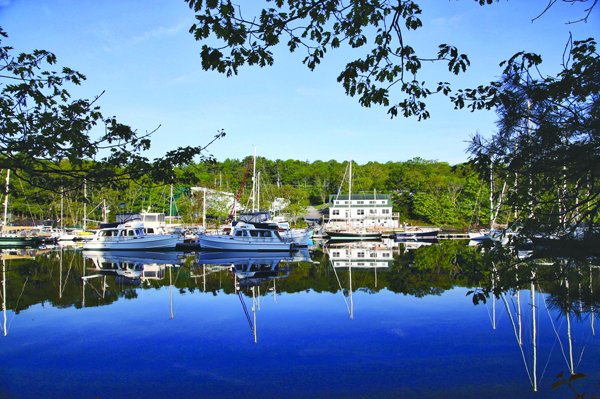 Photo by Alison Langley. Great Island Boat Yard, seen here from the water, has built a niche for its refit work.

By Polly Saltonstall Drive into the yard at Great Island Boat Yard in January and you might think the place has closed for the winter. Snow is piled up around the yard’s seven big metal storage sheds; floats from the four T-docks that normally bustle with boats in the summer are neatly stacked on land; and grey ice covers nearby Orrs Cove. 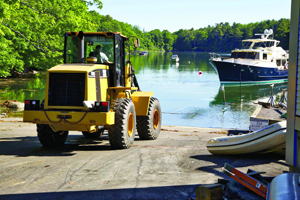 Photo by Jane Kurko. Late summer and fall are busy times at the yard as more than 200 boats are hauled out and stored.

Don’t be fooled by this calm exterior, though. Boatyards like Great Island, which stores 220 boats and refits another 15 or 20 a year, are busiest in the boating off-season. Step inside any one of these efficient, industrial buildings, and you will find people hard at work. Maine’s stellar reputation for new boat construction gets the limelight. But it is all-purpose yards like Great Island with their capacity for service, repairs, and refits that are the backbone of the state’s maritime industry today. Since Steve and Stephanie Rowe bought the 70-year-old Harpswell yard in 2005, they have grown Great Island from a small marina with mostly maintenance and storage to a rapidly growing business offering substantial refitting, painting, refinishing, rigging, installing and upgrading electronics and other systems, repairing wood or fiberglass hulls, even rebuilding hulls and renovating yacht interiors.

They left their high-powered corporate jobs and moved to Maine because instead of operating behind the scenes at a huge corporation, they wanted to interact with customers and know they were making a difference in people’s lives.

After spending years as engineers at General Electric, the two understand how to organize complex jobs and have introduced cutting-edge systems to increase efficiency and improve customer service. Engineers down the road at the much larger General Dynamics Bath Ironworks might possibly learn a thing or two from the Rowes. Steve Rowe said he has conscientiously focused on refits and repairwork, along with storage and maintenance, because he sees that as a sustainable long-run model. Rather than going from one or two major new boat projects to the next and always wondering where the next job will come from, Great Island does 15 to 20 refit projects a year, ranging from $75,000 to $600,000 for boats between 35-70 feet long, according to Steve. This spreads the load and means that no one project will make or break the business. An added advantage is that with a steady stream of interesting work, the yard can keep skilled technicians busy and engaged, he added. The Rowes have 35 employees. “Coming from GE where the power turbine business was always boom or bust, I didn’t want that,” said Steve. 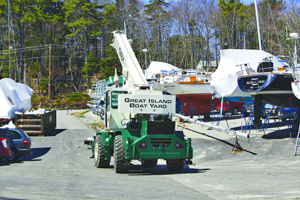 Photo by Alison Langley. Come spring the process is reversed as the yard’s crew prepares to step a mast as part of the relaunching process.

Steve, who has a business degree from Duke University, worked for General Electric for 14 years, first as an engineer at big power plants and then as manager of the company’s environmental services division. Stephanie also worked for GE, first as an engineer at power plants and then in marketing. They have two sons, ages 8 and 11 and live just down the road from the yard. They left their high-powered corporate jobs and moved to Maine because instead of operating behind the scenes at a huge corporation, they wanted to interact with customers and know they were making a difference in people’s lives. “We wanted to do something where we could make people happy,” Steve said. The heart of the operation is an airy, open post-and-beam structure that houses the business office, the store, and a customer welcome area. There from his stand-up desk overlooking Orrs Cove, Steve keeps track of hundreds of customers and their boat plans. Stephanie does just about everything else, including personnel, finances, and record keeping. 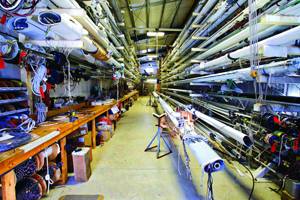 The yard’s busy season starts around Labor Day as the crew begins hauling boats, a process that lasts until the end of November. During that time, the Rowes and their team do annual service work on storage yachts—changing oil and filters etc.—and put together work plans for customers. “We do a ton of estimates during this time. We also are developing refit projects,” Steve said. “Our goal is by December 31 to have work-defined estimates in the system.” While the Maine winter howls outside in January, February, and early March, workers in the yard’s big sheds are getting boats ready for launching, which begins April 1. Launching season is the most stressful time. “I tell the crew the most important day is the day the customer arrives and steps on the boat. If it’s perfect, they’ll come back. If not, they won’t,” said Steve. The summer season may actually be the yard’s slowest time. 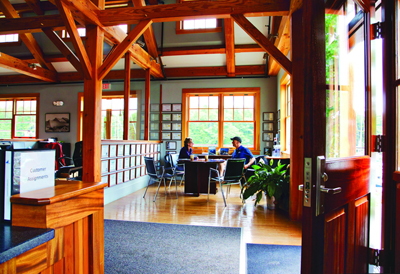 Photo by Alison Langley. Soon after the Rowes bought the yard a main building burned. They replaced it with an energy- efficient timber-frame structure built in 2009 by Houses & Barns by John Libby.

A chunk of the yard’s business comes from its relationship with Bruckmann Yachts and Grand Banks Yachts as a designated commissioning, warranty, and service yard. Additional areas of specialty are refits on Little Harbor yachts and offshore cruising sailboats; this is due in part to the expertise of the yard’s three riggers. Anyone planning to sail long distances at sea needs to know their rig has been carefully inspected and maintained, Steve noted. Walking through the sheds is like navigating through a maze. Big motor cruisers on stands share space with sailboats, packed in carefully, almost but not quite touching. A new 20,000-square-foot building built last year increased the yard’s total storage capacity to 60,000 square feet. And every inch is filled. 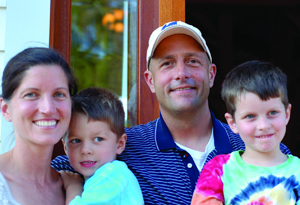 Photo courtesy Steve Rowe. Stephanie and Steve Rowe, here with their sons Keegan and Gavin, bought Great Island Boat Yard because they wanted a business they could run as a family.

“Refits are gangbusters right now,” said Steve. He has three older Hinckley Talarias in for various projects ranging from a new interior to new systems and teak decks, for example. A 1947 Alden ketch in another bay is getting a new centerboard trunk and rudder. That’s just the tip of the iceberg. One huge bay is set up just for spray painting. Steve is justifiably proud of the systems the couple have put in place, ranging from the use of iPads by service technicians to keep track of work on boats, complete with photos—replacing the previous paper trail between workmen, managers, and owners—to extremely careful, upfront work estimates. “During a refit, we spend 40 to 60 hours up front digging through a boat to put together an estimate. We do not want the customers to have any surprises,” he said. Even the smallest detail matters here. A handout in the customer lounge features photos of all the employees, listing their name and job—just in case a customer cannot remember the name of the person working on his or her boat. As Great Island’s reputation has grown, the yard has drawn customers from up and down the eastern seaboard. A quarter of the company’s winter storage business is boats that spend their summers out of state and belong to out-of-staters, according to Steve. The couple bought the business after four years of looking at yards from Virginia to Maine. Steve grew up in New York State where his family ran a small ski resort. Stephanie comes from a large Greek family. They wanted a business that they could run as a family and where they could interact directly with customers. Running a yard like this takes a lot of work, but the Rowes love it. At the end of a day of meeting with happy customers, they know they are in the right business. Polly Saltonstall is editor in chief of this magazine.