Finding inspiration in a floating studio 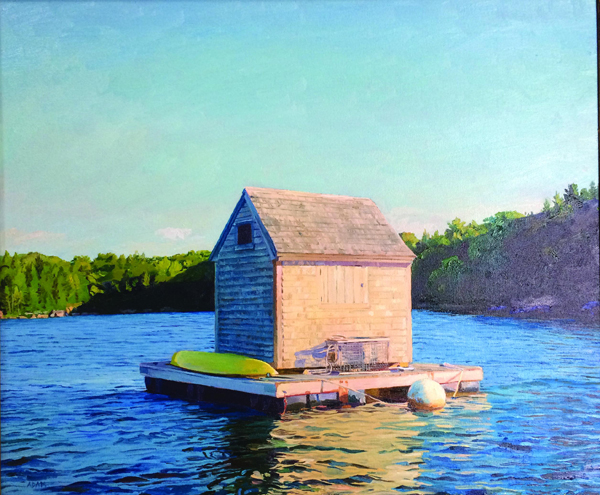 This painting by Joshua Adam, a friend of the author, captures the authentic feel of the shack on its mooring in Sealy Cove. Images courtesy Deborah Joy Corey

By Deborah Joy Corey For a time, I rented an old sail loft as a place to write. It sat on rotting pilings near the shore of the tidal Bagaduce River in Castine, Maine. When I first arrived and slid open the weathered glass doors facing the harbor, a black cormorant was floating in the briny June mist. Immediately, he seemed fully aware of my presence, his head turning from side to side to catch me in his peripheral vision. The double-crested cormorant is black with a greenish purple sheen from the oils that keep his wings from drying and has a long neck with an orange throat. No more than a sea crow, I found him exquisitely exotic and gave him the name Jinx. 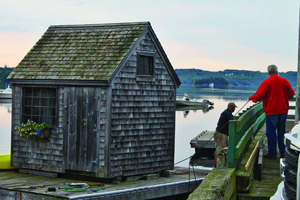 Kenny Eaton of Eaton’s Boat Yard (in red) helps l aunch the floating replica of a fisherman’s shack.
After two summers renting the sail loft, I vacated so the owners could remodel. During my time there, I had become smitten with the tides that washed in beneath its pilings and with the flotsam that remained after the tide receded. Often, I collected these treasures and lined them up on the sail loft’s windowsills: a tiny skeleton of a sculpin fish, spotted moon shells, a speckled lady crab shell, and spiny sea urchins, each holding the power to emancipate me from my daily routine. On a piling beneath the sail loft, I witnessed a starfish begin to grow a new arm, and the black seeds of mussels, protected by glossy-emerald-colored seaweed, blossom into plump and lovely bivalves. I’d watch the cloudy water of low tide become so clear with the cleansing high tide that I could look down through the floorboards, and see the rocky bottom beneath eight feet of water, those mussels glistening the mauve of a night sky. Once I sat still on a large shore rock while Jinx floated close enough for me to touch him, although I didn’t. Instead, I let him hold me in his peripheral vision like a jewel. 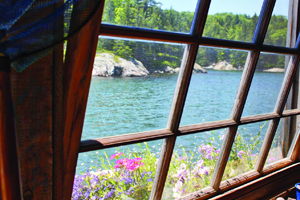