The Pull of an Island

Making a living on Great Gott 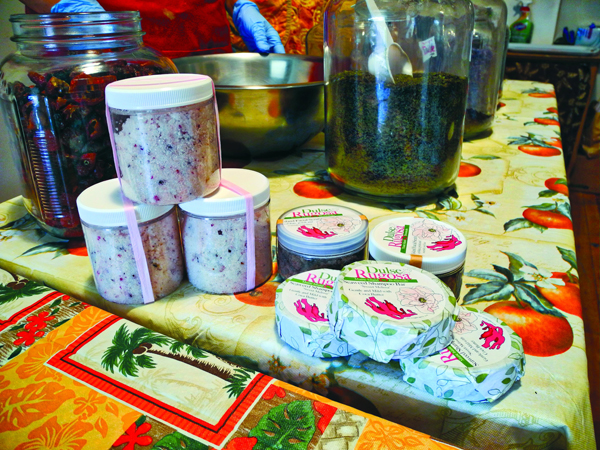 Photo by Lynette Walther. Dulse & Rugosa sea salts, the seaweed shampoo bar that started it all, and a container of seaweed face scrub.

By Lynette L. Walther “That was the place you were homesick for, even when you were there.” Epigraph with which Maine novelist Ruth Moore, who was born on Great Gott Island, prefaced her first novel, The Weir. It all began, as do many good stories, on an island. There’s something about an island, especially in Maine—an aura, a magnetic attraction. Just ask Claire and Carly Weinberg. This mother and daughter can tell you how an island, Great Gott in their case, captured their souls and has yet to let go. 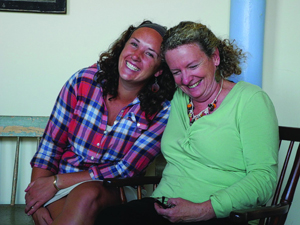 Photo by Lynette Walther. The daughter and mother team of Carly (left) and Claire (right) are the company’s sole employees.
It took some time, but eventually Great Gott became the heart of an island-based business for the Weinbergs. Their company, Dulse & Rugosa, uses seaweed and botanicals grown on the island to make skin-care products, and has allowed them to make a living in the one place that has always felt like home. Located about one-half mile off Mount Desert Island, Great Gott was a thriving fishing community in the 19th century, with two churches, a store, and a post office. Today no one lives there year-round, and the mail boat stops running in mid-September. “There are no cars, no stores, no ferry service, and only solar electricity on the island,” Carly said. Carly’s grandfather purchased land on Great Gott when her father, Ben Weinberg, was about a year old. Ben grew up spending summers on the island, just as Carly would do. For a time Ben, his wife, Claire, and eventually Carly, lived there year-round in a log cabin. Winters on an island can be cold and lonely. Chores took up many hours of the Weinbergs’ days. They grew their own food, raised animals and cut wood to heat their cabin. Books filled the remaining hours, and Claire and Ben bought them by the pound. “We were the last family to spend the winters on the island,” said Claire. 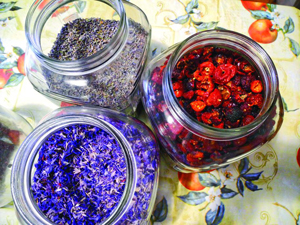 Photo by Lynette Walther. Dried rugosa rose hips, rose petals, and lavender.
The family tried various things to make a living on the island. “I taught myself how to use a knitting machine, and had a little sweater business,” Claire said. Nothing quite worked, and after seven years, when Carly was about three, they all returned to life on the mainland. Every summer, though, they returned home to Great Gott. “We always wanted to go back and live the way we did, get closer to the island,” Claire said. Then about four years ago, she realized that Great Gott had just what she needed: seaweed, and lots of it. “Ever since I was in high school I had a problem with itchy scalp,” Claire related. “I tried everything, even went to a doctor and got some medicated shampoo, which made it even worse. I had given up. But then I went to a seminar on seaweed and heard about all it can do. So I figured I’d just try it.” “I bought some powered seaweed, mixed it into some nice shampoo, and would rub it into my scalp while showering,” Claire explained. “That was a ‘wow’ moment. It really worked.” 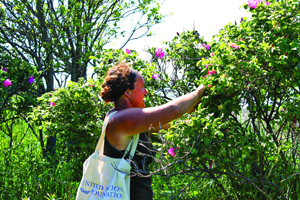 Photo courtesy Dulse & Rugosa. Carly gathers rugosa rose petals from one of the plentiful island bushes.
A plan took root. Claire went to more courses on making creams and body lotions and they experimented and experimented. Before long she and Carly had developed a line of botanical and seaweed-based skin-care products. They got a license from the Maine Department of Marine Resources (necessary if you plan to harvest seaweed for commercial purposes) and soon were gathering seaweed, as well as growing botanicals and harvesting rugosa rose petals and hips, all of which they air-dried on racks out on Great Gott Island. You need to understand something about Claire and Carly. They do not just get along; they complement each other. That’s good because they are the company’s sole employees. Claire and Carly alone climb down the granite shoreline past slippery rockweed and barnacles and wade into the ocean to harvest sugar kelp, dulse, laver, and oarweed. They alone lug five-gallon buckets brimming with wet seaweed a half mile or so along a rough island road to their drying racks. They pick rugosa rose petals in the spring and spread them on the racks to air-dry. They plant and grow calendula, lavender, and lilacs, and gather the other island ingredients that go into their potions. If the weather turns fickle, if it rains too much, or if foggy days disrupt the air-drying process, the harvest suffers. “We are totally weather-dependent and totally dependent on what we can grow or harvest,” said Carly. “But we know the limits of Gott Island.” The two women grow and dry their supplies on Great Gott during the summer. During the winter, they prepare, package, and deliver their products to stores on the mainland from the base they have established in Rockland for the fledgling business. 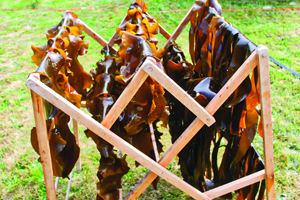 Photo courtesy Dulse & Rugosa. Harvested dulse dries on racks in the open air before it is finely ground and added to skin care products.
Claire and Carly are always working on the next thing and adding new items. Experimental jars of ingredients simmer and infuse on shelves in their tiny Rockland workshop. “We want to try to get into the man market,” said Claire with a shy smile. She envisions an all-purpose seaweed soap for men, perhaps one spiked with a bit of Maine-produced seaweed beer. Their product line currently includes a seaweed shampoo bar, bath soap, a face scrub, a rose-petal cream, a salt scrub, bath teas, seaweed potions for sunburn, dog shampoo, and a rose-petal and dulse tea. That last item is just the tip of the wave of possible edible seaweed items. The two have been experimenting with seaweed in a range of recipes from main dishes to brownies. Studies show seaweed has a number of beneficial properties. Beyond that, these products transport the user to Great Gott Island, or any Maine island for that matter. They carry the tingle of the salt air, the delicate fragrances of island-grown flowers, and, above all, the clean, fresh scent of seaweed. As Claire and Carly worked their island ingredients into Dulse & Rugosa products this past winter, out on Great Gott—where they hope to some day again live year-round—below the wind-tossed seas and spume the seaweed lay waiting for the spring harvest, when the process begins anew. Contributing Editor Lynette L. Walther is the recipient of the Garden Writers Association’s Silver Award of Achievement. She gardens in Camden, Maine. Her blog can be found at: gardeningonthego.wordpress.com. For more information visit www.dulseandrugosa.com.