These fiddlers focus on traditional music 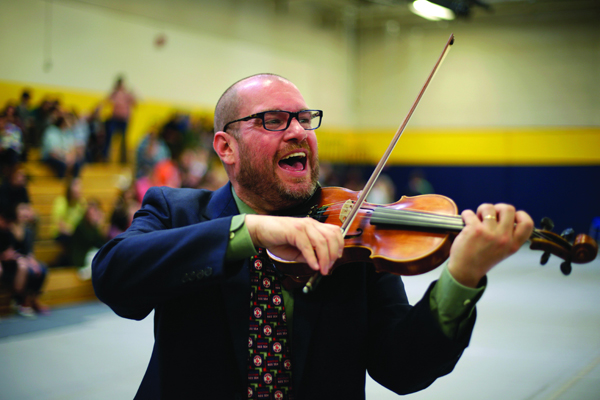 Steve Muise, orchestra teacher at Mt. Blue High School in Farmington, is the dynamic leader of the Franklin County Fiddlers, a musical ensemble now in its 22nd year.

By Bruce D. Snider | Photographs by Robert Bukaty “Hup!” The shout punched through the gorgeous din of a big, rollicking string band. A stage full of musicians on fiddles, cellos, guitars, and other acoustic instruments was powering through “4:44,” a sweet, driving tune by the Acadian band Vishtèn. When the big man with the little fiddle and huge smile issued that verbal exclamation point, the players kicked up the intensity yet another notch, blazing along in a burst of exquisitely controlled power. Then, with another shouted signal, the whole glorious freight train slammed to a halt. The players looked up from their instruments, glowing. The audience burst into applause. The smiling man, now beaming even more broadly, was Steve Muise (pronounced “Muse”), orchestra teacher at Mt. Blue High School in Farmington, Maine. The players, improbable as it seems after that performance, were his students. But this was no orchestra. It was the Franklin County Fiddlers, an ensemble Muise founded at the high school to spread the joy of playing the traditional music of New England, the Canadian Maritimes, and beyond. Now in its 22nd year, the program has accomplished that and more, broadening the skills of classical players, awakening Maine students to their cultural heritage, and building a musical community with connections that reach far beyond the state’s borders. 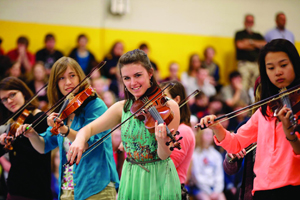 Fiddlers (left to right) Emily McCarthy, Casey Rogers, Riley Laflin, and Jennie Chen deliver a lively concert performance.
In an era of YouTube music videos and dwindling public school arts budgets, Farmington teenagers are lining up—and auditioning—to play 19th century jigs and reels. Part of the credit goes to the town itself, Muise said. “There’s a family-and-friends tradition of playing music together that’s really supported in rural areas like this.” The catalyst, though, is Muise’s irrepressible passion for fiddle music. The Fiddlers play by ear, arranging tunes as a group and giving each musician room to improvise. Relying on one’s ears, memory, and creativity builds musicianship, and it opens other doors, as well. With a common repertoire of tunes that can be endlessly elaborated, fiddle music thrives virtually everywhere and among players of every ability. “The expectation is that this is just the beginning, that they can do this with their kids someday,” said Muise of his students. Muise traced his passion for the violin to a childhood visit with an uncle in the family’s ancestral home of Nova Scotia. “He wasn’t a trained teacher by any means,” Muise remembered, “but he was a great fiddler. He would just play the tunes—Saint Anne’s Reel, Woodchopper’s Breakdown,
With a common repertoire of tunes that can be endlessly elaborated, fiddle music thrives virtually everywhere, and among players of every ability.
Ragtime Annie—and let me follow. The magic thing was that I was just playing.” Degrees in performance and music education from Berklee College of Music in Boston followed. “But I might not be playing today, much less teaching, if it weren’t for fiddle music,” he said. “It was the spark.” Silas Rogers caught that same spark at the age of seven or eight, when he attended his first Fiddlers concert. “They would do stuff like play behind their backs,” remembered Rogers, now 18, “and they played really cool arrangements.” As soon as he was eligible, he joined Muise’s middle school Fiddlers group, which serves as something of a farm team for the audition-only high school program. A powerhouse fiddler who doubles on guitar and tenor banjo, Rogers will study boatbuilding at The Apprenticeshop in Rockland after graduation. But he’ll also play professional gigs with his brother, Nolan, who at 15 is also a veteran Fiddler and a gifted cellist. Rogers and his senior classmates got a taste of the traveling musician’s life during their freshman year, on a six-day bus tour of the Canadian Maritimes where they had a private workshop with Vishtèn, performed at schools, and jammed with local musicians. “Musically, we all grew a lot,” says flutist Sophia Bunnell, who felt an unexpected sense of kinship with her Acadian counterparts. Muise has led similar trips to Boston, New Orleans, Quebec, and Ireland—all places with links to Maine’s French-Canadian and Scots-Irish musical heritage. The tours always include a college visit and bonding time on the bus. But at home or abroad, Rogers said, the group relishes its moments onstage the most. 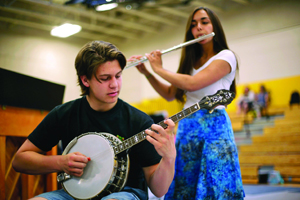 Silas Rogers on banjo and Sophia Bunnell on flute add musical layers to the jigs and reels.
What puts a Fiddlers performance over the top is Muise’s boundless enthusiasm for music, for teaching, and for his students. That was especially evident at the year’s last concert before graduation. During one extended number, Muise called on each senior in turn to step up for a solo—and a few affectionate parting words from the leader. When he reached Riley Laflin, a once-shy fiddler who had lit up the stage all evening with the energy and assuredness of her playing, he paused for a moment. “Riley,” he said, “I’m not even going to say it. I’m not even going to say it.” After their spring 2014 concert finale, the students snapped into stagehand mode, folding chairs and hauling sound equipment into storage. The emotion lingered, though. Laflin emerged from an all-seniors group hug smiling through tears. Later, she explained: “Fiddlers has been my second family. It’s the people I’ve grown up with and played with for years.” 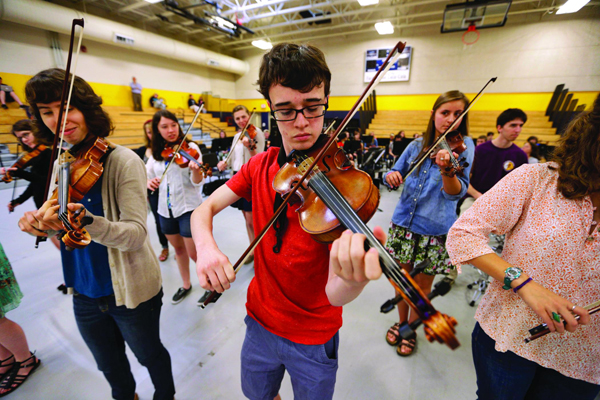 Fiddlers Miriam Cohen, Grace Andrews, Brendan Hickey, and Anna Glass (left to right, first two rows) are well versed in improvisation and playing by ear.
Despite the valedictory atmosphere, this would not be the last Fiddlers event for anyone on stage that night. The Fiddlers hold an annual winter reunion concert. Current members and alumni gather informally each summer at Maine Fiddle Camp in Montville, where Muise teaches. Then there is the far-flung community of musicians that these young people have joined—a lifetime’s worth of friends to be made by simply sharing a tune. When the first note sounds, Laflin said, “it doesn’t matter if you’ve only known each other for ten minutes or a day; you now have that in common. I feel like I’m never going to lose that. It’s always going to be there. It’s a part of me.” Bruce D. Snider is a writer and editor with a background in residential architecture and construction. He lives with his family in Belfast. The Franklin County Fiddlers and Alba's Edge perform "Johnny and Annette" at Mt. Blue High School in October 2014. Recorded by Debby Muise.