Sardine Nights and the Red Sox at Seal Island 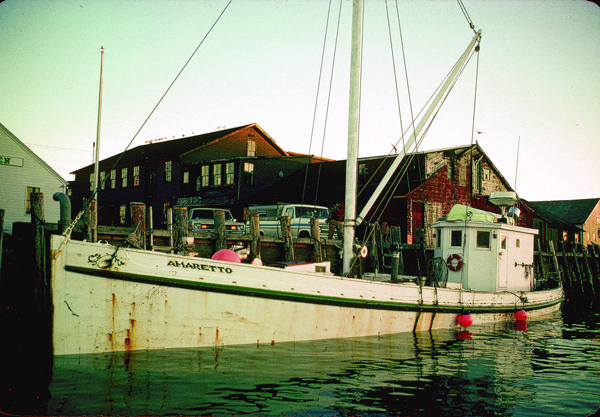 Photos by Joe Upton. Amaretto at Carvers Harbor, Vinalhaven, with a full load of 60,000 pounds of fresh Seal Island herring. At the dock, a ‘Fresh Bait’ sign went up and fish was sold directly off the boat for cash with the remainder sold to local lobster dealers. Proceeds were split 50/50 between Amaretto and the seiner.

By Joe Upton | My Boat, My Harbor

In the winter of 1976-1977, I purchased Amaretto (ex-Muriel), a 71' sardine carrier built in 1917. I re-powered it with a WW II-surplus diesel engine, and began operating it as a bait boat out of Vinalhaven.

On most summer evenings numerous sardine carriers, occasionally including boats from New Brunswick, Canada, would raft up at the stone wharf in Carvers Harbor on Vinalhaven, waiting to follow the local seiners down the bay in search of herring. We skippers would usually enjoy a paper cup of rum and coke in the cozy foc’s’le of the big carrier Pauline, hosted by Captain Henry Dodge, while we listened to the “herring air force,” which consisted of pilot Spencer Fuller in his little fabric covered Aeronca. Spencer would scout out the many coves around Vinalhaven and then the waters down the bay—the wide arc between Metinic in the west and Seal Island to the east—looking for herring. When we got his report on the VHF radio, we’d finish our drinks, thank Henry, step out into the cool summer dusk, start our engines, throw off the lines, and head out toward wherever Spencer had seen the fish.

Sometimes the fish would be inside—among the ledges and rock piles that surround Vinalhaven. In those pre-GPS and chart plotter days, that would mean careful work with chart and radar, following our shallower seiners. On the many foggy nights the navigation was even more intense. The land would disappear almost as soon as we took in our dock lines, not to reappear until we returned, deep in the water with our load of fish at two or three in the morning. 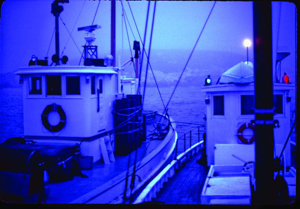 Pauline (left) and Amaretto on a foggy night at Seal Island,

The better nights would be at Seal Island. We’d go out through the buoyed channel among the ledges and 10 miles down the bay, to drop the hook in the Eastern Bight. There, we would wait for the radio call that one of the seiners had a net full of herring for us to load and take back to sell as lobster bait, or deliver to the Rockland or Belfast canneries as sardines.

On a good night, we’d get our fish early, and maybe be back and tied up before midnight. There would be time to stretch the legs and walk the dog before actually getting maybe five hours of sleep—a very good night. But more commonly we would sit for hours while the seiners patiently watched the fish, waiting for them to move over a smooth bottom where the net could be set without ripping. Often we’d lay our boats together on one anchor, us and the Pauline, or the Jacob Pike, or the Betsy and Sally, sometimes three of us. Outside was only the foggy black, the cry of storm petrels, the sound of the boats creaking against the big fenders as they rolled in the swell.

But down below, the foc’s’le was cozy, the oiled woods in the little galley I had built were warm and welcoming. Often there’d be a group of us, talking quietly about herring. And the Red Sox were on the radio: Carl Yastrzemski snagging flies in left field, Carlton Fisk tagging them out at the plate, Reggie Cleveland facing them from the mound. The Sox didn’t win the pennant that year, but they won 97 and lost 64—not a bad season. Many nights we’d get to hear a whole game before the other radio spoke its call to action, just a single word: “Amaretto....”

We’d finish our drinks, pull on our sweatshirts, and climb the foc’s’le stairs to the damp night outside. We’d start up, cast off the lines, and the black and the fog would wrap us up once again.

Joe Upton owned and operated fishing boats in Maine and Alaska for 25 years. He wrote Amaretto (International Marine Publishing, 1986) which will be republished in 2015 as Herring Nights: Remembering a Lost Fishery, by Tilbury House. He lives in Bainbridge Island, Washington and on Vinalhaven Island.

Letters to the Editor 175