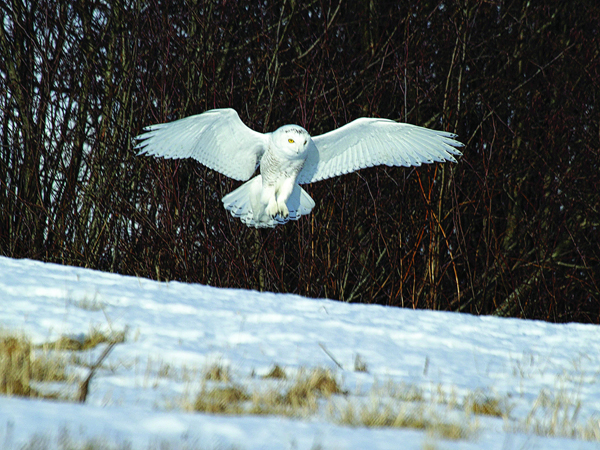 For two years in a row, the northern states from the upper Midwest through New England have been host to a species of bird normally considered at home in the high arctic: the snowy owl. The regular haunt for these owls is Canada’s arctic tundra where their nearly all-white plumage provides camouflage that allows them essentially to disappear into the snow while hunting lemmings, their main prey. In a normal year there often are a few dozen snowy owls in the Midwest and New England, and in those cases the ornithological terms for them are “accidentals” or “vagrants.” However, in extraordinary years, not tens but rather hundreds of owls take up winter residence here, and when they do they are referred to as an “irruptive” species. Such species are characterized by sharp peaks in population, followed by equally sharp declines. What drives these whipsaws in population size and resultant irruptive migrations? It’s all about snow, food, and other predators. Irruptive migrations can occur when food becomes either super scarce, resulting in birds migrating to find food, or when populations surge from food being very abundant, resulting in high survival rates of young. There is nothing like hunger to compel a species such as the snowy owl to pull up stakes and look for whiter pastures to the south. Two major causes of food scarcity include a decline in the actual number of preferred prey or more competition from other predators for the same limited prey base. However, the arctic’s population of lemmings is at a record high. Also, a snowy owl monitoring project called Project SNOWstorm that is capturing and radio-tracking snowy owls has found no indication of starvation or malnutrition. Rather, the owls they are handling are all in good shape. Not hunger but the opposite, an overabundance of food during the summer breeding season, is underpinning this owl irruption. Far from starving, most of these owls are perfectly healthy. They stay put in the summer when food is plentiful, but when winter comes there are too many of them competing for more limited food, which drives some of them south, although just for the winter. They will return north come spring to breed. Researchers have found that snowy owls in major irruption years are typically fatter and healthier than those in non-irruptive years, thus supporting the “abundant food” hypothesis. Specifically, high populations of lemmings, voles, ptarmigan, and other owl prey appear to be leading to large clutches of owl eggs and concomitant high rates of owl survival. For example, during the summer of 2013 in northern Quebec, lemming populations boomed and snowy owls had a record-breaking 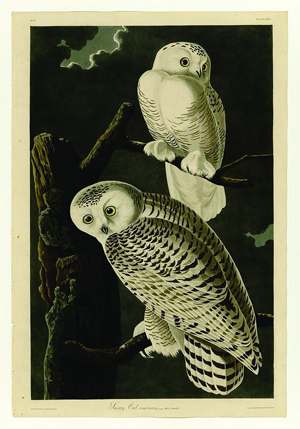 Snowy owls by John James Audubon.
nesting season. The autumn of 2013 was the beginning of what is now seen as the biggest owl invasion of the last 50 to 100 years. Similarly, in the summer of 2014, snowy owls had another banner breeding season in the Canadian Arctic, which appears to be responsible for the unusually large number of irrupting snowy owls in the Northeast and the Great Lakes (Wisconsin and Michigan especially) this past winter. Once they arrive here in our more human-dominated landscape, it should be noted that owls face a whole new set of risks, such as vehicle and airline collisions, rodenticide poisoning, and electrocution on power lines. If it weren’t for the vast army of citizen-scientists known as birdwatchers, we might not even be aware of this fascinating and important irruption of snowy owls. Like astronomy, where backyard stargazers routinely spot new celestial objects, ornithology is a science that benefits from the many sightings of birds and especially from social networking and the resultant sharing of those sightings. Because polar ecosystems are known to be on the front-line of climate change, the more we know about arctic species such as snowy owls the better equipped we are to contend with the effects of climate change. Birdwatchers in concert with ornithologists may together help inspire insights into how best to survive in a world of increasingly human-manufactured climate. Richard Podolsky is an ornithologist living in Rockport, Maine. He wrote an article on the razorbill auk for the inaugural issue of this publication. For more information on snowy owls and their invasion southward: http://www.projectsnowstorm.org