Childhood adventures in a small boat 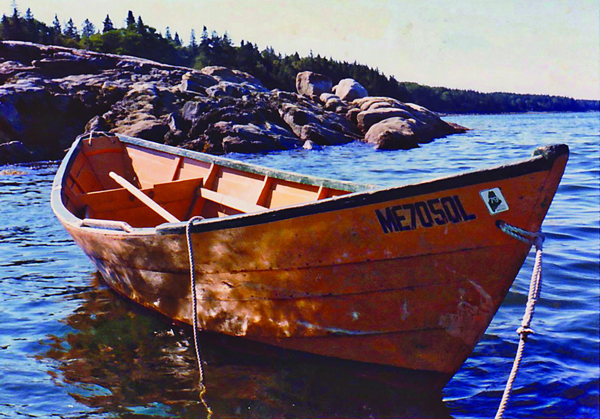 I’ve been on and around boats my entire life. One boat, however, stands out from all the others: a Banks dory originally built in Lunenburg, Nova Scotia. My father restored it on Louds Island in 1978, replacing the garboard and sheer planks. He also built a watertight bulkhead in the stern and cut out a motorwell for a 10-hp British Seagull outboard motor. This allowed my parents to use the old dory as a lobsterboat. My mom and dad lived and fished off Louds as the island’s last year-round residents. When the harbor would freeze over in the winter my mom would stand in the bow to break up the ice while my dad slowly brought the old dory up to the docks on the mainland. 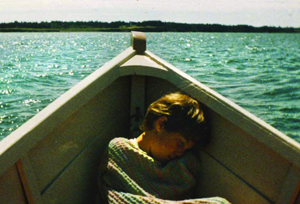 The author’s little sister Hannah (aka Moonglow) asleep in the bow of dory.

My dad named the dory Hilda L., after his grandmother Hilda Libby Ives, who was no stranger to water herself. She lived in Cape Elizabeth and would swim out to Peaks Island and back almost every day from summer until mid October, before the era of wetsuits. As a child I knew the dory as a playpen behind our house. My parents had moved back to the mainland and were building wooden boats for a living. I tied a rope to the tree branch over the boat and loved to swing back and forth from rail to rail. Once my sisters and I were old enough, my family would use the Banks dory to explore the many islands along the coast of Maine. My parents always took the month of August off to take our family on vacation: Grand Manan, Swan’s Island, or Newfoundland. One summer we lived out on Matinicus Island; we towed the old dory to the island behind the ferry from Rockland. We would pack picnics and spend days exploring the different islands around Matinicus. Criehaven was one of our favorites because of its many raspberry and blueberry bushes. Our family pretended we were Native Americans and we gave ourselves special names. My sisters were Moonglow and Princess Punky. My parents were Stillwater and Sleeping Bear. I was Swift Arrow. As we walked the overgrown paths around these Maine islands, I would run up ahead and hide behind trees or rocks and wait for my family to walk past. Holding my breath I would wait to hear their voices die down then run past them to start the game all over again. 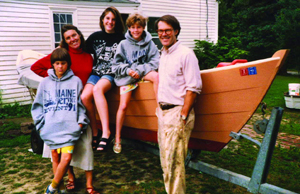 The Ives family had many a summer adventure aboard the Hilda L.. Left to right: Jonathan, his mother Ruth, sisters Hilda and Hannah, and his father, Bobby Ives, circa 1988.

Once that summer we made the voyage out to Matinicus Rock because my sisters loved the story of Abbie Burgess. As the 16-year-old daughter of a lighthouse keeper, Abbie kept the Matinicus Rock light burning during a 22-day storm in the mid-1800s while the high seas kept her father from landing on the island. My own family waited for a calm morning to motor six miles out and land our dory on that rock in order to walk around the famous lighthouse. I give my father a lot of credit for taking his family to a rock, known for bad weather, 18 miles from shore, in an open 17-foot dory. As a boatbuilder now myself, I understand that the design of a dory makes it one of the most stable and seaworthy boats one can own.

My dad named the dory Hilda L., after his grandmother Hilda Libby Ives, who was no stranger to water herself. She lived in Cape Elizabeth and would swim out to Peaks Island and back almost every day from summer until mid October.

Our dory only sank once, and that was at the dock on Matinicus. Built from large granite blocks stacked on top of each other, the Matinicus town dock usually has a few skiffs and dories tied right up to its sides. One night the bow of our dory got wedged under one of the blocks, and with the rising tide, the dory was capsized and sunk right there at the dock. My father had to carry the old British Seagull back to our house, take it apart, and soak it in a bathtub of fresh water. After he dried and oiled it up, the outboard started on the first pull. I was down at the dock that day with my father. We were in the dory together when I saw a fisherman putting two kittens in a burlap sack. He told me he was going to drown them. I asked my dad if we could keep them and he agreed. At the end of that summer, I came home with our family’s first pets, two island kitties named Sunny and Cloudy. They became members of a family whose stories join together, just like the fine lines of our seaworthy boat.

Jonathan Ives is a boatbuilding instructor at the Carpenter’s Boat Shop in Pemaquid. He works as a captain, taking passengers to Monhegan Island on the Hardy Boat. He and his wife Jessica live in downtown Damariscotta.