Photos by Amanda Ravenhill and Ryan Kushner. Top-Bottom:The whole Little Cranberry Island summer community participates in the hoopla surrounding the building and launching of a boat at Islesford Boatworks. Tristane McDermott helped sand (1). Susanah Chaplin, Emme Jergenson, and teacher Geoff McKonly inspected details in the woodworking (2). Adult supervisors Peyton Eggleston, David Ravenhill, Brendan Ravenhill, Geoff McKonly, Peter Philbrook, and Shippen Savidge and the youth crew celebrated the finished boat (5). Launching day included a pirate party, model boat races (4), outings on the newly launched Tubby Legs (3), as well as the presentation of a model of one of his boats to the designer of Tubby Legs, Harry Bryan of New Brunswick, Canada. Here (6) Bryan holds the model, which was built by Eggleston.

When a crew of 90 works on a boat project it usually means the vessel is pretty big. But at Islesford Boatworks that many people spent last summer building a pedal-powered sailing canoe that was only 12' long. Ranging in age from 8 to 70, they were learning boatbuilding skills and building community at the same time.

In fact, the number of people helping build this small vessel, named Tubby Legs, was greater than the year-round population of Little Cranberry Island, where the project took place.

Located off the mouth of Mt. Desert Island’s Somes Sound, Little Cranberry is home to a small year-round community of about 70, including lobstermen and artisans. Built with lapstrake cedar planks over a spruce frame, Tubby Legs is a Finboat designed by traditional boatbuilder Harry Bryan of New Brunswick, Canada. In addition to a small lug-rigged sail, the boat has a flexible fin off the stern. Reciprocating foot pedals push the fin back and forth, propelling the vessel through the water like an undulating fish.

Each year the leaders of this hands-on summer school pick a new boat to build. Tubby Legs is the eighth boat built at Islesford Boatworks. Five of their projects have been Bryan’s designs, including a small pram with a wheel in the bow and oars that stick off the stern allowing it to be “wheeled” in and out of the water. Brendan Ravenhill started the program with his siblings, Geoffrey and Amanda, in 2006 in a barn they built on their property in Islesford. He was inspired by his work as an instructor at Rocking the Boat, a boatbuilding and on-the-water education program in Bronx, New York.

Life-long summer residents of the island, the Ravenhills wanted to maintain the area’s boatbuilding tradition. The program runs for several weeks each summer with portions dedicated to instruction for both adults and children. There is a small tuition, but no one is turned away because of financial need. The nonprofit program has been supported by contributions from Islesford residents and by grants from the Maine Community Foundation, the Ferguson and Nichols foundations, and local banks.

One of the school’s most ambitious projects took place a few years ago when students built a rowboat designed by the late Arthur “Chummy” Spurling, a long-time island boatbuilder who died in 1975 at the age of 102. “I feel strongly that such a program has tremendous impact on an island where boats are a daily part of life,” Brendan Ravenhill said. “Islesford Boatworks engages a younger generation to consider new ways of supporting themselves through the sea.”

Ravenhill lived year-round on Islesford for four years after college, working as a lobsterman. He now spends his winters in Los Angeles where he runs a small furniture- and lighting-design firm.

Tubby Legs may be small, but the mechanics of the pedals made the project particularly complex and added an extra year to the build time, according to Executive Director Tony Archino. The first year was spent forging and assembling the metal parts. The wooden hull was built in the second year. A former colleague of Brendan’s at Rocking the Boat, Archino began working for Islesford Boatworks four years ago after he rowed a small open boat built by students of the Rocking the Boat program to Maine and fell in love with the place. He became executive director last summer. The crew working on Tubby Legs last summer included children and older volunteers, and even a class of students from College of the Atlantic in Bar Harbor that came over for a day.

On launching day in mid-August the whole town gathered to accompany the boat on its trip to the water. Bryan came down from Canada for the event. His daughter Sally sewed the sail. Like all the school’s previous launchings, this one involved a pirate party. This year there also were model boat races, and owners of the organization’s previous boats were on hand, rowing and/or sailing their vessels in the harbor. 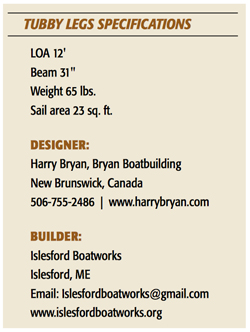 Tubby Legs performed well on its maiden voyage, Ravenhill said. “It sort of wiggles like a fish. The pedals mean you can keep your hands free. When you pedal up-wind you can point higher than you might otherwise. Regulating how you pump controls the steering.”

Like the school’s previous projects, Tubby Legs was sold in a raffle to Marion Baker, a long-time Islesford summer resident who runs a pottery shop there. Archino and Ravenhill have not yet decided what boat to build next year. “We’ve set the bar pretty high with this one,” said Archino. “It’s going to have to be pretty special.” Polly Saltonstall is Editor in Chief of this magazine.