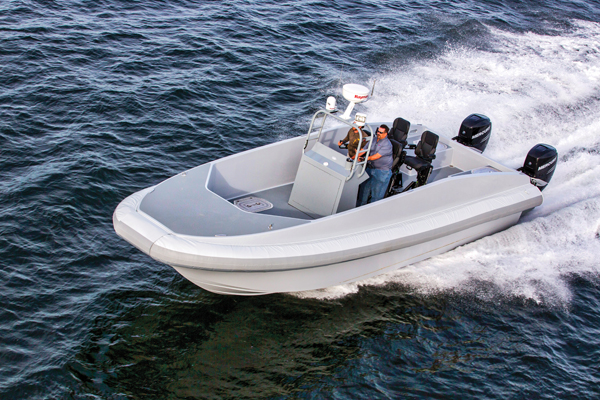 Photo by Billy Black. The new T33 may look a bit awkward but it handles like a dream.
By John K. Hanson, Jr. It was a cold, grey afternoon. The waters of Belfast Harbor were grey and rain was starting to fall. The large yachts, catamarans, workboats, and family cruisers on the hard at Front Street Shipyard loomed grey in the shadows. Even the boat that Front Street President J.B. Turner and I were boarding was grey. It was the perfect setting for a spy novel, and this looked to be a boat that could play a starring role. At first glance, the boat looked awkward. High sided, with a foam ring around the perimeter of the hull like an inflatable, it was big and wide. Upon further inspection, though, the design made sense. I took a ride with J.B. Turner on that cold, dank evening, and was impressed. The twin 300-hp Mercury outboards on the platform were quiet and powerful. The boat was stable, made little wake, and went very, very fast. As we flew across Penobscot Bay at 40 knots, Turner said, “Watch what it’ll do in a turn;” then he spun the suicide knob on the wheel hard over. I grabbed the armrest of my seat, fearing the worst. No problem, though; the boat tracked beautifully and remained level with no loss of control as we spun in ever-tighter circles at full speed. This ugly ducking performs like a badass swan. The new Trefoil 33 Patrol Cat is a high-speed patrol boat designed for shallow rivers and rough ocean waters. The goal was to create a fast vessel capable of going on missions 30 miles up a river as well as 30 miles offshore while remaining seaworthy and comfortable. Front Street Shipyard is building these nimble catamarans for Trefoil Marine; Trefoil is marketing the boats to defense and security clients around the world. Each player on the project brings years of expertise to the task. Front Street Shipyard has experience with modern infused-fiberglass technologies and set up a state-of-the-art shop to build the hulls in Bucksport, Maine. The designer, Donald L. Blount and Associates of Chesapeake, Virginia, is known for drafting fast, soft-riding hulls for both military and recreational markets. Based in Newport, Rhode Island, Trefoil Marine has a long background of working with yacht racers, builders, and the military. 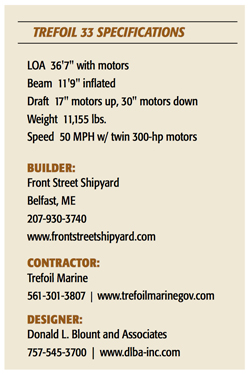 Boats with deep-V hulls and inflatable sides have been workhorses in the field of small utility vessels for the government for some time. But the folks at Trefoil Marine thought there still was room for improvement. “When we first met with the people at Blount, I said we needed a simplified hull form,” said Whitey Russell, a principal at Trefoil Marine. “How about something like a Bertram, with two degrees more dead-rise but a scoop out of the middle?” When I look at the T33, even I can see that design brief, but, boy, has it been tweaked. The catamaran hull is strikingly new and has been patented. The hull shape, combined with the composite construction, should make this a durable and efficient vessel. For Front Street Shipyard, the T33 represents entry into a whole new market: military and law enforcement. While there are hurdles to dealing with this market, companies like Trefoil are key to navigating the bureaucracy. For its part, Front Street Shipyard has shown it can deliver the product. John K. Hanson, Jr. is publisher of this magazine.