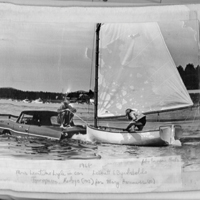 Going my way? I thought you might like this picture after the wonderful article on the amphicars (MBH&H Winter Issue 2015). There were two or three that crossed the thoroughfare from North Haven to Vinalhaven in the late 1960s and early 1970s. In this picture from 1968, Mary Harrower, age 10, is at the helm of the North Haven Dinghy, Kedogo. Her grandmother Mrs. Leontine Lyle is driving the car and I am sitting on the trunk. We had just finished a midget race (for sailors 12 and under) and were becalmed. Mary’s grandmother was nice enough to give us a tow home. You can just see the bow of the old ferry in front of the mast. I thoroughly enjoy Maine Boats, Homes & Harbors. What a great magazine.
Lev Byrd
Needham, MA
Fabulous floating car The Amphicar! I never saw it on land. But as a kid back in the late 1960s, I recall sitting on our porch on Hobbs Pond as this strange motor craft approached. The closer it got, the more it looked like an automobile, headlights and all. As it slowly passed by, I—and the rest of my family—waved with enthusiasm from the beach. It was the talk of the day. I had almost forgotten about the strange vehicle until I brought in the mail and saw the cover of my favorite (and only) magazine. Now I know what to call it. The Amphicar I remember was red with a white stripe...and oh those fins. Thanks for stirring up old memories.
Dennis Corcoran
Hobbs Pond, Hope, ME
Fine Fish indeed 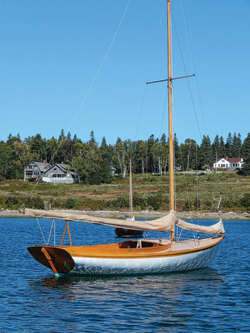 Art Paine’s fine article in the Winter 2015 Issue on two new daysailers based on the iconic Nathanael Herreshoff Fish Class is on target in calling that class “a near-perfect” design. Similarly, in a letter dated 1970, Nathanael’s son L. Francis Herreshoff in regard to the Fish Class wrote, “these are much better boats than any built since.” That is high praise from someone who really knew. This past August I brought a newly purchased original Fish to Brooklin, Maine. The boat, now named Perch, was beautifully restored by MP&G of Mystic, Connecticut, in 2005. I spent many, many hours in the next two months sailing her in a wide variety of weather on Eggemoggin Reach and Jericho Bay. The boat is a true delight to sail. She also is a work of art and craftsmanship that is a delight to behold. I savor watching the interplay of light and shadow on the curves of her topsides and the gleaming of her varnished trim and spars. There are too few of the originals left, but Artisan Boatworks in Rockport, Maine, has an original just waiting for someone to commission a restoration and enjoy the extraordinary privilege of owning and sailing one of these Herreshoff masterpieces. Included here is a photo of Perch on her mooring in Center Harbor.
Ben Emory
Salisbury Cove, ME
Astute reader Lovely boat that Fish Class. I fondly remember my stepfather chartering one for a couple of weeks when I was a teenager. This current model seems a bit under canvased at only 27 square feet. Do you suppose it would perform better with 270 square feet?
Nick Fast
Hilton Head Island, SC
You are so correct. We hate it when those 0’s go missing! — The Editors