The quiet side of Mt. Desert 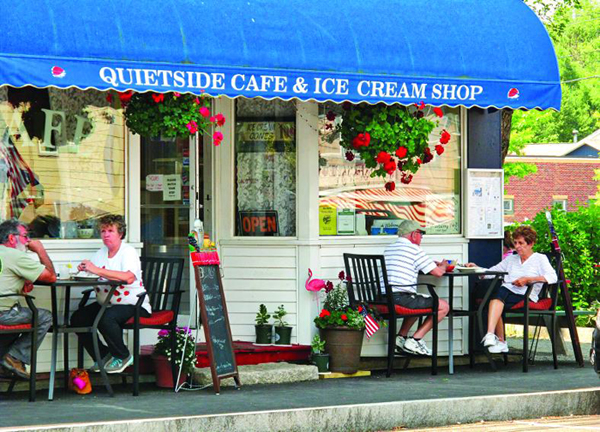 By Mimi Bigelow Steadman Traveling through Casco Passage, which links Jericho and Blue Hill Bays, always feels like “sailing onto the next page,” to quote Bert and I. As we exit the channel’s eastern end, our first unobstructed view of the spectacular seascape and Mt. Desert Island always takes my breath away. Rusticators arriving here by steamboat in the late 1800s also must have been awed by the sight. Back in those early days, the first wave of summer folk to discover MDI washed up in Southwest Harbor, where locals happily provided rooms and home-cooked meals. Boarding houses were soon joined by rambling hotels, although of a lesser grandeur than the hotels and millionaires’ “cottages” that sprang up elsewhere on Mt. Desert. Today, Southwest Harbor still seems more old (boat) shoe than well heeled, compared to the glitzier summer colonies of Northeast and Seal Harbors. The unofficial capital of the island’s “Quiet Side”—quiet compared to the summer bustle of Bar Harbor—is a hard-working community where life goes on as usual after the season ends. “There’s always been a lot of commerce besides tourism here,” noted Bob Hinckley, former owner of the renowned Hinckley Company, which is based here. A hub of Maine boatbuilding, the town is also home to A.W. Pettegrow, Great Harbor Boatworks (formerly Ralph Stanley), Hank Hinckley Boatbuilder, Ellis Boat Company, Marine Systems Custom Boats, Morris Yachts, and Wilbur Yachts. Jane Ayres Peabody, who oversees marina activity at Dysart’s Great Harbor Marina, cites some of the things that sustain residents in the off-season. “There are book talks and other events at the library and free recitals at the Claremont Hotel. The Harbor House Community Center sponsors a variety of activities, and Common Good Soup Kitchen holds monthly fundraising suppers.” My husband and I usually cruise into Southwest Harbor just as August gives way to September, and the tide of visitors is ebbing. We have the streets almost to ourselves and walk to the village center from the town docks, where dinghy tie-ups are permitted. The town also maintains moorings, as do Dysart’s and Hinckley. You can drop the hook north of Clark Point, but there’s no anchoring in the harbor. It’s fun to buy mid-cruise goodies at specialty grocery stores like Sawyer’s Market, where you can get a cut-to-order steak or fresh fish, and pick up some local veggies. Once, we happened upon some kids selling late-season blueberries at a front-yard stand. The pie we made was so juicy it collapsed when we sliced into it. If you’re doing extensive shopping, Sawyer’s will deliver you and your groceries to the dock. For free transport farther afield, Island Explorer buses pick up passengers in front of the Southwest Harbor post office (and elsewhere when flagged down), stopping in towns and at Acadia National Park entrances and trailheads. (The bus runs late June through Columbus Day; routes are available at www.exploreacadia.com). Two of our favorite trails ascend Flying and Acadia Mountains, both just north of Southwest Harbor. You can take the bus to the parking lot, or go by water a short way up Somes Sound to Valley Cove and anchor in 20 to 30 feet of water. There’s a Coast Guard mooring here that you may be tempted to use. I’ve consulted the Coast Guard, and there doesn’t seem to be a regulation specifically prohibiting tying up to it. But if you do, be ready to move if the Coast Guard needs it. Accessible from the shore, the Acadia and Flying Mountain trails reward with sweeping views out over the islands and up Somes Sound. It turns out, by the way, that despite the longtime claim, the Sound is not a fjord after all. Neither its depth nor the height of its flanking peaks meets the requirements. It is, rather, a fjard. But these are mere words, and the scenery remains just as stunning as ever—and nearly unchanged since the first rusticators lugged their steamer trunks ashore in Southwest Harbor. Mimi Bigelow Steadman lives on the Damariscotta River in Edgecomb and spends as much time as possible exploring Maine by land and sea.