Two classic daysailers based on the Herreshoff Fish Class 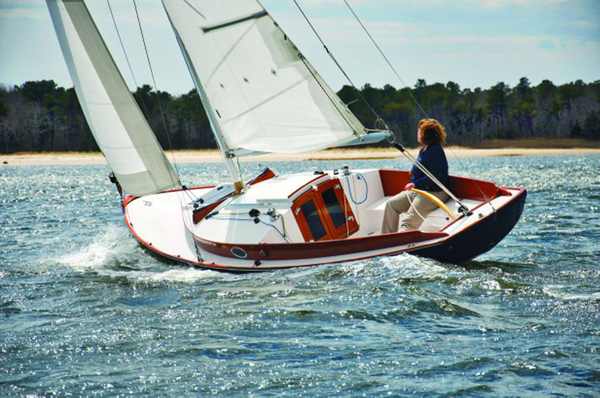 The new Cape Cod Marlin Heritage 23 sports an elongated, roomy cabin as well as a nice cockpit for daysailing. Photo by Michael C. Magni, Cape Cod Shipbuilding Co.
By Art Paine The most vibrant portion of the new sailboat market these days is daysailers. While some versions are so expensive and lavish that they almost deserve a separate category, there are many simpler small boats to consider for afternoon jaunts. I find I’m drawn mostly to traditional boats with super comfortable cockpits. My favorites tend to be traditional designs from the last century. When all I want is to sail some distance and back for the pure enjoyment of sunshine, wind, and waves, I don’t need high performance. Part of the experience is about slowing down and being free of cares—an afternoon surrounded by friends, without the requirement of much muscular effort, or fear of a knockdown, or risk of catching a pot warp. Some of the best boats I know for this duty are derivatives of a near-perfect design by the Wizard of Bristol (a.k.a. Nathanael Herreshoff) called the “Fish Class.”
In a boat this small, having the cockpit floor below the waterline almost inevitably makes seating more comfortable—a key consideration for daysailing.
The Classic Boat Shop in Bernard, Maine, builds a cold-molded or fiberglass variant called the Pisces 21. Although its designer, my twin brother Chuck Paine, tweaked the Wizard’s original in a few ways, the Pisces is still basically a sound, leak-free, Herreshoff Fish. All of Classic Boat’s Pisces-building slots seem to sell out each winter, and for good reason. About the only thing the boats lack is a marine head and a sleeping berth. Now there are two additional, new, and excellent designs that embellish upon the excellence of the Herreshoff Fish: the Cape Cod Marlin Heritage 23 and the Selkie, a design by Doug Hylan. 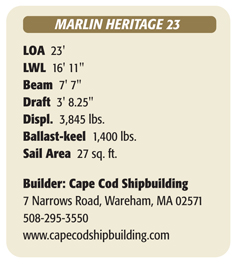 First, the Cape Cod Marlin Heritage 23. The original Marlin was the brainchild of Les Goodwin, founder of Cape Cod Shipbuilding in Wareham, Massachusetts. A pioneer in fiberglass construction, Goodwin changed the design of the Herreshoff Fish significantly. He added beam and, most noticeably, a counter stern. Many of the early Fishes were built for yacht clubs on Buzzards Bay, a place famous for its booming southwest winds. Since there were no running backstays, many the skipper of a Herreshoff Fish ran home into Onset or Quisset while gazing nervously at the fir mast—all that kept the stick from tumbling forward were the two aft lower stays. Providing an anchor for a permanent backstay was one strong rationale for the Marlin’s extended counter stern. Now Cape Cod Shipbuilding has made additional improvements. Gordon L. Goodwin redesigned the Marlin to create the new version, the Heritage 23, which was launched last spring. One memorable feature of the early Marlins was the translucent fiberglass cabintop. The new Heritage has a much more “Herreshoffy” cabin —one of many improvements. In a small boat you can have a big cockpit or a big cabin; usually you can’t have both. At first blush I questioned the elongated vee cabin on the Heritage and the incursion it made upon cockpit length. But oh that cabin! This is the nicest, most hospitable cabin I’ve seen in a while. 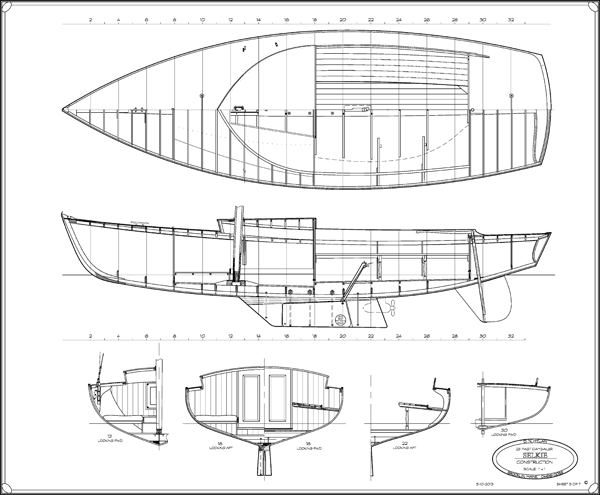 Doug Hylan has drawn plans for a 23-foot keel-centerboard sloop that he calls a Selkie. It is deigned to be stable in a steady breeze and hold up to six people in its comfortable cockpit.
This boat also has a self-bailing cockpit, a self-tacking jib, and an inboard engine, three sensible features for geriatric sailing. I love this little yacht, which seems to have everything. There’s another variant on the Fish theme that deserves consideration here. Yacht designer/builder Doug Hylan of Brooklin, Maine, has a boat on the drawing board that he calls the Selkie. 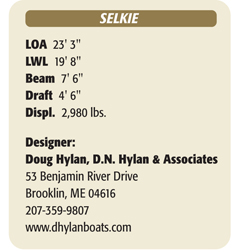 The best feature of Hylan’s design is that it’s the only Fish spinoff with a hydrodynamically refined keel-centerboard. A properly configured keel-centerboard is a practical solution for trailering, or for rock-studded and shoal cruising grounds. Unlike the vast majority of wooden keel-centerboarders in existence, this design benefits from proper NACA foil shapes for both keel and board—a huge and in my opinion critical advantage because it has less drag and less resistance to making leeway.
In a small boat you can have a big cockpit or a big cabin; usually you can’t have both.
The Selkie’s cabin is just a cuddy, but with a little tweaking, I expect Hylan could design in a head and a berth... at least one. My only critique of the drawings so far is that the tiller looks to be a little short. With the ability to vary the balance by angling the centerboard, perhaps designer Hylan is one step ahead of me regarding that. An inboard motor, or at least one which can be instantly employed, is nearly essential for a daysailer. Hylan has specified a German-made electric motor with a folding propellor installed under the hull just aft of the keel. It’s a perfect solution, partly because batteries are so simple to deal with compared with even the best gasoline-powered outboard motors. This species of Fish lacks a self-bailing cockpit, which means it will require a cockpit tent, an electric bilge pump, or both. Countering that miniscule concern is the factor I call “leg drop.” In a boat this small, having the cockpit floor below the waterline almost inevitably makes seating more comfortable—don’t forget the importance of comfort as a key consideration for daysailing. Another reason to recommend the Selkie design is the reputation and proven past accomplishments of Hylan. Previously, he’s mostly designed and built powerboats and small craft. When the first Selkie is launched from a trailer, I am confident it will prove a thing of beauty as well as a versatile and sprightly performer. Contributing Author Art Paine is a boat designer, fine artist, freelance writer, aesthete, and photographer who lives in Bernard, Maine.