The buoyant Amphicar can handle both 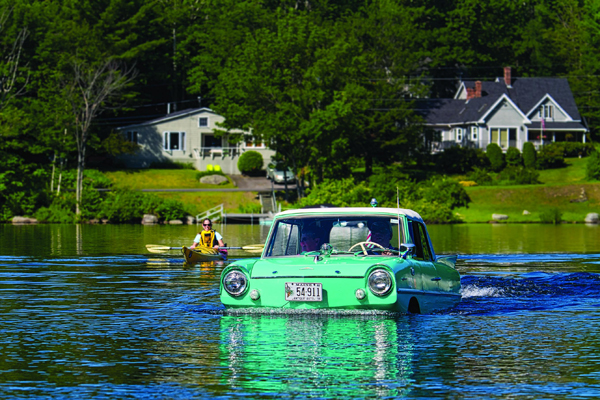 Boaters do a double take when they see Bob and Nancy Stover drive by in their Amphicar.
By W. Hodding Carter | Photos By Jamie Bloomquist For years—well, decades actually—I assumed that the gorgeous, sea-blue, fin-backed sedan I saw driving out of Lake Megunticook in August 1981 was just a figment of my imagination—a tall tale recounted to practice my yarn-telling, similar to the claim that I kissed 27 girls my freshman year in college. I was retelling my amphibious-car story recently to a friend when she jumped in with, “I saw one too. But it was motoring along the shore by our house on the Fox Islands Thorofare.” My fellow car-boat sighter was the editor of this magazine, a woman perhaps given to the occasional embellishment, but not outright lying. I really had seen this vehicular miracle. Not only was the German-made Amphicar 770 (the make and model of the car I saw that day) a real amphibious car, it also was the only non-military, mass-produced one ever made—if you can call 4,000 cars in seven years mass-produced. Many of you reading this may have seen, or at least heard about, this miracle machine that both zooms down the turnpike at 70 miles an hour and then, moments later, gets under way in small seas at a faster-than-hull-speed seven knots (thus the “770”). 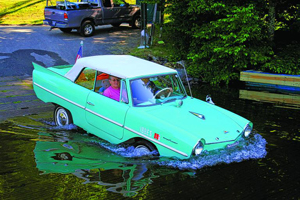 You do not need to engage the car’s propellers until you are in the water. A red light on the dashboard goes on when the propellers start turning. Other dashboard controls include a bilge pump.
These Maine-based sightings are not mere chance. Between 1961 and 1968, when Amphicars were in production, there were only four distributors in the entire United States. One of them was Kelley Pontiac in Bangor. If you’ve frequented Maine’s shorelines the last 50 years often enough, chances are you’ve seen an Amphicar. If that sighting took place in midcoast Maine, the one you were lusting after might well have been one of Bob Stover’s. “The first time I saw one was when a salesman from Kelley’s drove one when he visited my dad back in 1967. My father and I both thought it was pretty silly,” Stover, now 80, admitted to me at his breakfast table recently. “And a bit expensive at the time.” The Stovers were a saltwater sailing family and had no need for a “boat” that saltwater could so easily damage. The average sticker price for an Amphicar back then was around $3,000. That was a lot of money for a novelty. Taking inflation into account, that’s roughly $21,000 today. 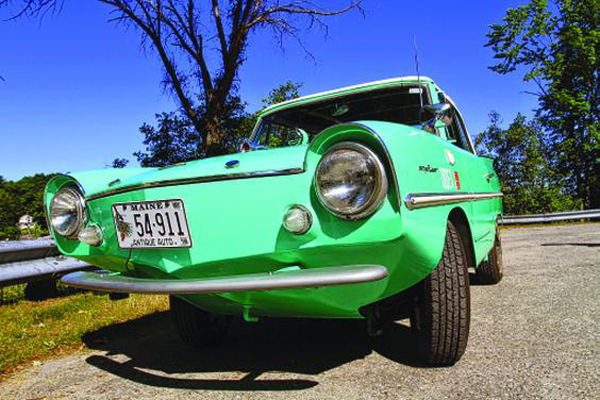 The horn on top of the hood doubles as a vent for the car’s 10-gallon gas tank. The car’s boat registration sticker is on the left front fender.
Decades later Bob turned 50 and retired from the family business—Stover and Stover Jewelry in Belfast—where he’d been working since he was nine. Soon afterward he opened a shop to restore antique cars. Bob buys unusual old vehicles that require detailed work and puts more hours into restoring them than he can possibly ever recoup. A while back he restored three antique Whizzers (motorized bicycles) in one year. The coming-together of the man and the amphibious auto was inevitable. It happened finally in the fall of 1991. Bob and his wife, Nancy, were at an Owls Head Transportation Museum antique auto auction when they came across a 1964 Amphicar 770, shiny yellow and with only 4,000 miles on the odometer. Amazed that none of the dealers were bidding, Bob got it for what he considered a steal: $5,000. As Bob told me this story, I glanced at Nancy to get her take on this great “deal.” She rolled her eyes. “I thought he was crazy, of course. Why did he want something all the other dealers didn’t?” I understood her hesitancy, especially since Bob admitted that the car smelled of gas when they got it. Surely, though, she was not against Amphicars in general? Wanting an amphibious car is like a European wanting his/her country to win the World Cup. It’s in our DNA. You don’t have to be Walter Mitty to dream of having a car that instantly goes from land to water. It’s like that jetpack we all fantasized about, except, thanks to a German industrial designer named Hans Trippel, amphibious cars are a reality. 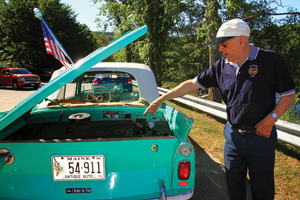 Bob Stover points to the engine, which is under the car’s rear hood. Louvers on the hood angle in different directions to protect the engine when the car is under way. The rakish rear fins also help protect the engine from waves.
“Hans Trippel is the Henry Ford of amphibious cars,” Bob told me. Trippel built his first successful amphibious vehicle in 1929 at the ripe old age of 21, and his 2.0 version, shown to the German military in 1934, landed him a military contract to build what would eventually be the Schwimmfähiger Geländewagen, an amphibious cargo truck. After the war in 1949, he jumped back into the swimming-car business. For the next decade he built schwimmwagen after schwimmwagen in search of the perfect version for mass production. His Eureka moment finally arrived at the 1959 Geneva Motor Show with the unveiling of his amphibious Eurocar, which would go on sale as the Amphicar in 1961. When you have the time to take a good look at an Amphicar, it’s a mystery why the design failed to sail beyond its niche market. The racy finback guarantees instant curb appeal and pretty much demands a closer inspection. That’s when you catch sight of the red/green running lights and shiny chrome docking cleat (on earlier models) on the bow, er, hood. When you bend down to look underneath, the under-carriage twin propellers confirm your growing suspicions that this is, in fact, a car that can float. The boat-like bow that angles up from the wheels proves its seaworthiness. No detail has been overlooked as far as watertightness is concerned. Those rakish finbacks aren’t just eye-candy. Angled slightly outward, they’re designed to block rogue waves, such as ones created by gawking motorboaters for instance, from the rear-mounted engine. Speaking of which, two rows of the rear hood louvers angle back, and the other two angle forward to protect the engine from any water that doesn’t get blocked by the fins. Every opening is gasketed and even double-gasketed in crucial areas. The doors are double-latched, but in case any water manages to find its way in, holes in the door sills lead to a bilge—the bilge pump drains out of the rear hood. Air intake points are limited since anywhere air can enter so can water. The horn, just aft of the forward running lights, also serves as a vent for the 10-gallon gas tank. Air intake for the heater is inside the car. 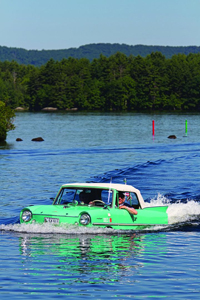 The Stovers like to take their Amphicar out for occasional picnics on lakes near their home. While the car is a convertible, putting the roof down is a lot of work, so the Stovers tend to leave it up. They keep life jackets in the back seat.
The Amphicar is clearly ready for the water, with, according to the owner’s manual, one caveat: “Remember that your Amphicar was designed for FRESH WATER ONLY. Should you use your Amphicar in salt water and corrosion occurs, you are not covered by the Warranty.” Bob estimates a single saltwater outing can cause $1,000 worth of damage. Taking the car from land to water is pretty simple as long as you remember to follow the last-minute checklist in the glove compartment: Warning! Before Boating 1- Put bilge plug in 2- Secure front luggage deck 3- Use lower locks to seal door Otherwise, it’s pretty simple. When you’re about to enter the water, slow down and shift into first gear. Once you’re floating, shift to neutral and move the water-gear lever forward. To go in reverse you engage the clutch and move the lever backward. Both propellers turn to the right—unlike twin props on a boat that turn in opposite directions—which makes heading to starboard much easier. (The owner’s manual points out, “Water traffic rules generally require that vessels approaching each other steer to the right to avoid collision.”) The car steers on water just as it does on land because the front wheels are also the rudders. 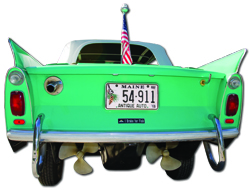 The Amphicar’s propellers are under the rear fender. They both turn in the same direction, unlike dual propellers on most boats. This means that when motoring in the water the car can turn tightly in one direction and not in the other.
Of course, it wasn’t quite so simple with that first Amphicar Bob and Nancy brought home in 1991. Nancy called it “The Yellow Submarine.” After breaking down on their way to their first water cruise, the car seemed destined for a short stay with the Stovers. The time that water started seeping in while the Stovers were in the middle of a lake—due to a worn door gasket—didn’t help matters. After many mechanical adjustments backed by several successful outings on area lakes, however, things started to change. “It was just so peaceful and nice when we went out in it,” Nancy recalled. “I fell in love.” When they moved to Florida in the late 1990s, the Stovers sold “The Yellow Submarine” for three times what they had originally paid. But the little car-boat had won them over for good. They bought another one and saw Florida in a way few others have. “We liked driving over to Crystal River. We’d be cruising along and the manatees would be swimming right under us. It was dreamlike,” said Nancy. They sold that car, as well, a few years later when they moved back to Belfast. 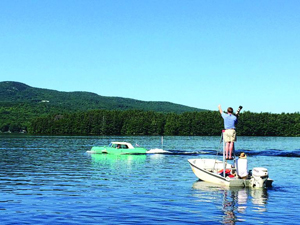 Photo by Polly Saltonstall MBH&H’s Jamie Bloomquist strapped a ladder into his Boston Whaler as a platform from which to photograph the Stovers’ Amphicar in Camden’s Megunticook Lake. MBH&H Publisher John K. Hanson, Jr. drove the Whaler during the shoot.
Now they’re on their third Amphicar. It has a gorgeous green paint job only slightly lighter than the original green (the 770s came in four colors: blue, green, red, and white). While it was in fairly good shape when they got it, Bob still put about 600 hours into attending to details most people wouldn’t even know to look for, let alone fix. The car looks nearly new. Amphicars in such good shape can sell for anywhere from $50,000 to $60,000. “But I’m not planning on selling anytime soon,” Bob said. “What’s going to beat driving down a boat ramp without a trailer and then zipping off across the lake in the exact same vehicle?” W. Hodding Carter has written for several national magazines, including Esquire, Smithsonian, Newsweek, and Outside. The author of Westward Whoa, A Viking Voyage, and An Illustrated Viking Voyage, he lives with his family in Rockport, Maine. VIDEO EXTRA: Go for a ride in the Stovers’ Amphicar. Watch our video here https://www.youtube.com/watch?v=loTMKuPIu-g&list=UURVVbTbPIjioH4QsB6GEMKg