Hundreds of gray seals converge on the rocky ledges of Penobscot Bay's Seal Island during December and January to give birth. The island, which is part of the federal Maine Coastal Islands National Wildlife Refuge, is home to more than 400 of these formerly rare creatures.

Hauled out on a ledge, a large male gray seal might be taken for a coarse-textured erratic or a gray-brown, partially collapsed balloon—until he raises his head, yawns, eyes the neighborhood, and resumes his nap.

Field marks such as the Roman nose, separated nostrils, and blocky head confirm this is indeed a gray seal (Halichoerus grypus) and not its more common cousin, the harbor seal (Phoca vitulina). The large head and nose leave no doubt why H. grypus is known as the horse-head seal, or why the Latin name means “hooked-nose pig,” a misleading designation that slights the animal’s skill as an obligate carnivore. Ungainly and awkward on shore, the gray seal is swift grace in the water, able to chase down and kill small whales.

Until recently there was a bounty on gray seals in Maine and Massachusetts, which explains the species’ near demise in New England. Like lynx, gray seals were perceived as an unwanted, predatory pest that had a negative impact on other, more desirable species such as cod. Add other anthropogenic hazards—boat strikes, trigger-happy humans, entanglement with plastic debris and fishing gear, oil spills, hunting, and fur harvesting—and it’s a miracle that any gray seals survived. After all, their cousin, the Atlantic walrus (Odobenus rosmarus rosmarus), did not.

Natural threats include storms, disease, predation by sharks, and pups orphaned or crushed by adults. All in all it’s a tough life, even for this top-dog predator. By the late 1960s, gray seals in New England were confined to a handful of isolated colonies. Seeing one was rare, akin to spotting one of the other now-recovered species, such as bald eagles or osprey.

Their rescue was the result of the 1972 Marine Mammal Protection Act, and currently, gray seals breed at two sites in Maine: Green Island, near Petit Manan, which had 59 seal pups in 2008; and Seal Island, near Vinalhaven, which had 446. While small in comparison to the estimated 350,000 gray seals in Canada, the numbers are rising. The seals have a year-round presence from southwestern Nova Scotia and Fundy Bay along the coast to Massachusetts and beyond, almost to Rhode Island’s Narragansett Bay. During the winter, they range as far south as New Jersey. Stranded animals have been reported in Cape Hatteras, North Carolina.

Ferocious hunters, gray seals eat 4 to 6 percent of their body weight every day—around 40 pounds of meat for an adult male. They roam the water column searching for lobster and other crustaceans, sand eels, cod, herring, skate, squid, octopus, seabirds—and the occasional harbor porpoise, a 5-foot, 100-pound cetacean that is a very fast swimmer. Mostly they consume their prey under water, although larger animals may be brought to the surface to be torn apart and enjoyed piecemeal. Gray seals are capable of diving deep—250 feet is not unusual—and they have been recorded as far down as 1,560 feet. They can hold their breath for an hour.

A mile long by 300 yards across at its widest point, Seal Island was historically a destination for harvesters of eggs, feathers, and meat, which contributed to the local extinction of gray seals and a variety of colonial nesting seabirds. During World War II and until the 1960s, the military made matters worse when it used the island for target practice, leaving a legacy of pockmarks in the granite and a scattering of unexploded ordnance. 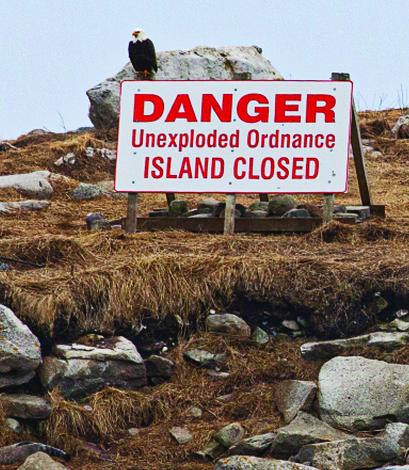 During WW II and until the 1960s, the island was used for target practice by the military and the occasional unexploded shell still turns up. After the passage of the Marine Mammal Protection Act, the island became a part of the federal Maine Coastal Islands National Wildlife Refuge and is now managed collaboratively by the U.S. Fish and Wildlife Service and the National Audubon Society, at long last providing legal protection from the grasping hand of human self-interest.

Seabird restoration began in 1984 and became the life work of several scientists, notably Cornell University’s Steve Kress. Through scientific enterprise, publicity, and hard work, Kress and others gradually transformed the 65 acres of blasted granite into a garden of opportunity for seabirds. In 2012, 737 pairs of puffins were nesting within the crannies and fissures that crisscross the island, a phenomenon not seen since the 19th century. In addition, some 2,500 common and Arctic terns, gone since 1936, breed there now, in addition to roseate terns, guillemots, razorbills, laughing gulls, Leach’s storm petrel, double-crested and great cormorants, and others including bald eagles that scavenge the dead and prey upon the vulnerable the year round.

Head toward Seal Island in dense fog from downwind on a June day, and you’ll smell it first. There’s no mistaking the pungent odor of the rookery. It’s followed by the cries, croaks, and groans of the birds. Then, when you’re really close, there’s the sight and sound of the white, foaming surf. The island lies in the water like a huge granite worm that a prudent mariner approaches with caution and fascination.

It's easy to understand why the Latin name for the gray seal means hooked-nose pig when you see the profile of one of these big creatures.

It’s a much harsher  place in January when the 35-pound gray seal pups are born into a world of freezing air and water, where every sheltering nook is scoured by wind that tears loose anything that doesn’t belong. But gray seals do belong, and so they thrive, along with other winter residents: dense clusters of purple sandpipers, a few razorbills, long-tailed ducks, common eiders, the occasional Icelandic gull—and the many eagles that come over from the mainland to feast on seal placentas or to peck the eyes from an unprotected seal pup.

Gray seals are born with a creamy-white pelt that camouflages them on ice or snow and insulates them from the cold. By the time this “lanugo” is shed two or three weeks later, a baby seal will have gained six pounds per day and weigh nearly 100 pounds—all from its mother’s milk. It then acquires its unique, adult pelage and begins to forage on its own. This is a dangerous time for the juvenile as first-year mortality may reach 50 percent.

In addition to the numerous natural and human threats mentioned above, gray seals face the ever-increasing threat of pollutants, which are passed up the food chain and become concentrated in these big, long-lived mammals and interrupt hormonal activity.

The future of H. grypus is not certain. But it’s a good deal brighter today than it was only a few decades ago. Bear that in mind when you next spot a hooked-nose pig.