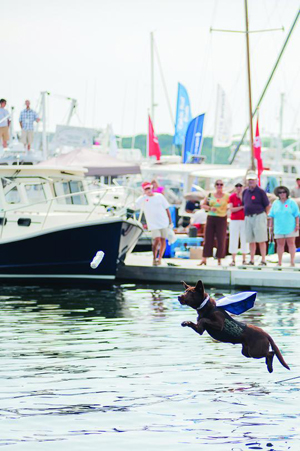 Gatsby: The New World Champion
After a rambunctious morning of canine showmanship at the 2014 World Championship Boatyard Dog Trials, held during the annual Maine Boats, Homes & Harbors Show, barking rights were awarded to Gatsby, a rare, “flying” chocolate Lab from Scarborough. Gatsby edged out the competition by acing the mandatory parts of the contest with ease, then launching into a series of incredible high-flying jumps—so high did she fly that she needed to wear goggles between leaps. After a second-place finish last year, Gatsby was determined to parlay her love of water, jumping, tennis balls, and swimming into an irrefutable win. She will display the “Pup Cup” trophy on her doghouse mantle for one year and have a photo shoot with Bell’s Furry Friends Photography of Hermon, Maine. Among the other competitors, Polly was also an amazing leaper. Sadie Rose’s routine was wonderful, but apparently her dog watch had stopped, so she went well over the time limit. She did wow the crowd when she took it upon herself to jump in and “rescue” Bavini, the youngest competitor. Bavini magically made 12 treats disappear, no easy feat with a puppy-sized belly. Sandra Bee’s sultry routine and costumes caught everyone’s attention. Last year’s champ, Ruffles, gave it her all to defend her title. She climbed in and out of the tippy dinghy 12 times in honor of the show’s 12th year. The Boatyard Dog Trials lead sponsor was Custom Float, supporting sponsors were Bell’s Furry Friends Photography, Loyal Biscuit Company, and Sea Bags. The judges’ boat was a center-console Parker 1801 provided by Yarmouth Boat Yard. Start training now for 2015! Do you have a dog that helps on your boat or accompanies you alongshore? We’d like to see your water-friendly canine. Email a clear photo and pertinent details to editor@maineboats.com or mail it to Boatyard Dog, P.O. Box 566, Rockland, ME 04841. VIDEO EXTRA: Watch Gatsby perform her willing trick at https://www.youtube.com/watch?v=tpCA0O6YrVA&list=UURVVbTbPIjioH4QsB6GEMK...

We’d like to see your Boatyard Dog. Email a clear photo and pertinent details to editor@maineboats.com or send it to us at Boatyard Dog, P.O. Box 566, Rockland, ME 04841.