By Peter Bass
Lobster shells, lobster balls, lobster landings Ah, summer. Our short season is packed with more events, shows, fairs, and festivals than one could attend in 10 summers, especially if time is set aside for those low intensity pursuits that summer is also about. I speak, of course, of lazing about outside, eating, walking, talking, swimming, fishing, snoozing, and porch sitting. Perhaps we can forego the big events this summer (except the Maine Boats, Homes & Harbors Show of course, August 8-10) and make it to some offbeat, but essentially Maine events. 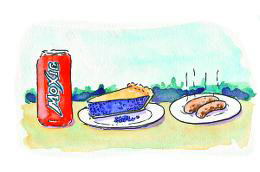 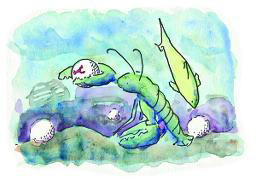 Illustration by Ted Walsh
In The Working Waterfront, Wanda Curtis tells us that a University of Maine graduate student came up with the idea of using lobster shells as a primary component in biodegradable golf balls a few years ago. The idea has been developed at UMaine, patented, and is ready for production. We'll be looking for it in the local pro shop. Other uses mentioned for lobster shells included using shell pigment in salmon feed, shells in solid surface countertops, and components in medicine. We may not need to answer the vexing question about deep-sixing the shells after a feed after all. My younger brother will gather them up and sell them, just as he does with all the returnables after a big family gathering. Ferry docks and a (Nova) star is born Ferry service from Bar Harbor and later Portland, Maine, to Yarmouth, Nova Scotia, and back ended during the recession when the costs of running the ferries couldn't be covered. This left Bar Harbor with an unused terminal and waterfront site owned by the Canadian government, and no ferry service at all. For Yarmouth, Nova Scotia, in particular, the economic loss was staggering. Times have changed. Bar Harbor, the Maine Port Authority, and the local Chamber have backed a bill in the Maine Legislature seeking a $3 million bond to buy the terminal from the Canadian government. The property would then be redeveloped into a cruise ship terminal. Bar Harbor is expecting 136 cruise ships to visit with more than 150,000 passengers this season, according to Laurie Schreiber in The Working Waterfront. Currently passengers are brought ashore on tenders and arrive into downtown Bar Harbor. The other news is that a new ferry has begun service between Portland and Yarmouth, Nova Scotia, much to the delight of the citizens of Yarmouth. The ripple effects at both ends will be enormous. The ship is a 528-foot, Singapore-built ferry with capacity for over 300 cars and 1,200 passengers, kennels for dogs and cats, restaurants, bars, and a casino. Google Nova Star and read all about it. Much as I'd like to stay and chat, the summer season is in full swing and I have lobsters to eat and grandchildren to chase. Half the season is still in the bank, so waste not a minute. I like sausages and Moxie, Blueberries in hot cakes With Maine maple syrup; There can't be any fakes. When it comes to dinnah Lobster feeds are swell. I'll take two of everything But where to put the shells? Next time you hear from me The season's winding down Good time to take the ferry And visit Yarmouth Town. In the meantime sail on by And keep your courses steady. We see all, but won't recall; Feet up, binoculars at the ready.

Illustrations by Ted Walsh Peter Bass is a long-time MBH&H contributing editor who especially enjoys wasting his Ivy League English degree reporting on coffee brandy and composing silly rhymes at the end of each column. The working title of his memoirs is reputedly "A Life Well Squandered." To submit your comments... newsy tidbits, photos, illustrations, clippings, rants, and raves for possible use in this column, use the form below. Or mail to “View From the Porch,” P.O. Box 566, Rockland, ME 04841 or fax to 207-593-0026. Items may be edited for length and clarity; materials become the property of Maine Boats, Homes & Harbors, Inc.