By Deborah Joy Corey Twenty years ago my husband and our toddler took a trip along the Maine coast. We'd read a magazine article about the state's untouched coastal villages and couldn't resist, following the writer's narrative as if we were following a map to undiscovered loot. What I remember most about that trip is the briny smell in the early morning mist mingled with the sound of careening seagulls, the meandering peninsula roads, and the seafood shacks that we visited along the way, each more charming than the last. Little did we know then that it would be the beginning of our own narrative for the Maine coast, collecting these shacks like newfound friends. Growing up in New Brunswick, Canada, I had fallen in love with fish early, trout from the high-running spring brooks and salmon caught on the Miramichi River, all fried by my father in a heavy black cast-iron skillet in sizzling butter, which made the salted skin as crispy and tasty as potato chips. I loved my mother's creamy fish chowder and her fish cakes, both made from cod shipped from Newfoundland. These were regular dishes on our home menu, but because we lived inland, shellfish was a rare treat, reserved for special dinners, family reunions, and summer trips to the seashore. Often as a day trip, our father drove us two hours south to have deep fried scallops, clams, and haddock at Ossie's Lunch in Bethel, New Brunswick. Through the pine forests we drove, the windows down and the wind wicking the sweat from our foreheads. Arriving at the red painted shack, Father would purchase Cokes right away, a treat we were only allowed on outings. After taking long swigs from the voluptuous, cool bottles, we'd press them to our hot foreheads and then stand back, perusing the menu that hung over the little take-out windows. Unlike other eating establishments that we visited, food at Ossie's was ordered in pints and baskets and pieces. A piece of haddock, a basket of clams, a pint of scallops. In the windows beneath the menu stood smiling waitresses dressed in white nursing uniforms, a somehow reassuring sight that sealed them in my mind, along with the smell of deep fried seafood, and the hissing and frying sounds that rose up behind the waitresses. While we visited the outside toilets and then chose our picnic table, Dad ordered and then chatted with other patrons while waiting. Watching him, it seemed as if he knew everyone. Only hindsight will tell me that I was also watching an original day-tripping locavore. By modern terms, he and my mother were both faithful foodies, a dedication that was woven through our family like mighty string through a nest.

When my trip with my husband along the Maine coast was over, we had not only visited coastal villages, working our way north, but we had stopped at dozens of seafood shacks and even revisited some on our return home to Boston. The seafood was incredibly good, reminding me of Ossie's Lunch, and we soon learned as new parents that a seafood shack is a great place for a family. Most are surrounded with picnic tables, and most are near or on the water, where a seashore walk can shorten the waiting time. 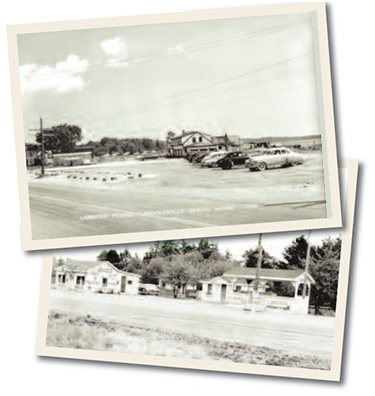 Many seafood shacks sprang up in Maine along coastal highways in the mid-1900s. These photos were taken in 1950. Above is the Lincolnville Lobster Pound, which is still in business off U.S. Route 1. Below is Joyce's, which was on Route 1 in Searsport but closed many years ago. Photos courtesy of Penobscot Marine Museum (2)
At one take-out with a rolling field down to a tidal bay, there was a mish-mash of old go-carts, tricycles, and wagons lined up behind the take out. Our daughter chose a rickety wagon, coasting down toward the bay, her giggles entertaining others sitting at near-by picnic tables, making it feel a bit like a family reunion. I was reminded of Father standing at Ossie's and chatting. I suppose part of the camaraderie that surfaces at seafood shacks comes from the pilgrimage that some have taken to reach their favorite destinations and part perhaps from the discovery that others feel on their first visit. No matter, standing and reading the menu at a seafood shack, I always have that great anticipatory feeling of having just arrived. A few years after our trip along the Maine coast, my husband and I moved our family to one of those small Maine villages, and now each spring we wait for the seafood shacks to open, marking each of their opening days on our family calendar. Over the years, we have visited many of them repeatedly, sampling entire seafood menus, narrowing it down to our favorites in a game we call, If you had to choose just one. Often the choices create great debates. For some a piece of fish trumps a basket of clams, while others simply stick to crab rolls; some frown on my choice of blue mussels or whole belly clams rinsed in their own cooking broth, and then dipped in melted butter. Watching me enjoy each one, they sneer at me like pirates.

Over time, these seafood shacks have strung together a summer narrative for my family. When I imagine a map of the Maine coast, I see the shacks marked with red tacks like the color of the siding at Ossie's Lunch. Each holds a little something of Ossie's. Most have been operating since the 1950s and are open from May through October. While hamburger joints began dotting the West Coast and barbeque stands began in the south, seafood shacks multiplied like mussels on a rope along the East Coast. They catered to those who began day-tripping and vacationing, towing travel trailers shaped like fat silver bullets, or staying at newly built motels, or summer cottages.

Arriving at the red painted shack, Father would purchase Cokes right away, a treat we were only allowed on outings. After taking long swigs from the voluptuous, cool bottles, we'd press them to our hot foreheads and then stand back, perusing the menu.
My family's favorite shacks all serve delicious coleslaw and old-fashioned desserts such as bread puddings and lemon pie with mile-high meringue. Some still have waitresses in nurse's uniforms and outside toilets that smell of the forest and mold and are perfumed by dangling air fresheners in the shape of pine trees or lemons. Most are family-run with passed-down recipes and our favorites have no indoor seating. Some have been given the James Beard "American Classic" award and often the line to order is as long as the meandering road that one takes to reach them. But the wait is always worth it. Sitting at our picnic table in the seaweed air beneath careening seagulls, amidst the other patrons enjoying their sweet Cokes and seafood, it seems that time has stopped, just as we have all stopped to visit a treasured friend. Enjoying one another, we know that we have finally arrived. Deborah Joy Corey lives and writes in Castine, Maine. **BONUS CONTENT: Read about the new guide, Lobster Rolls of New England