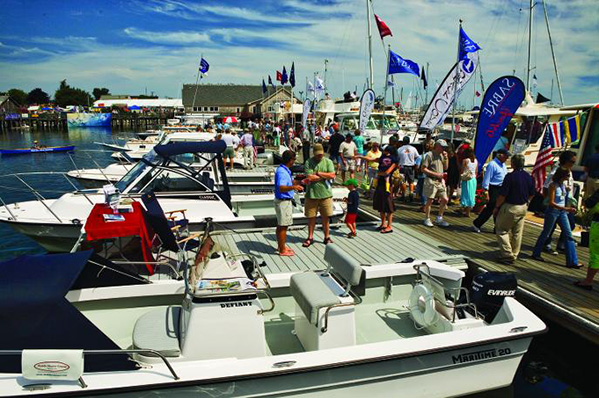 The MBH&H Show features more than 50 boats in the water. Photo by Jeff Scher

The Rockland, Maine, waterfront comes alive for three days every year in August when boatbuilders, jewelry and furniture makers, artists, marine suppliers, and others converge at the annual Maine Boats, Homes & Harbors Show. 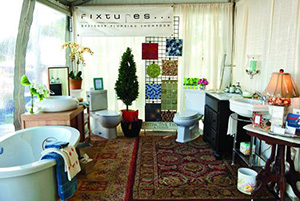 Many of the shoreside tents feature furniture, home fixtures, art, rugs, jewelry, and other crafts. Photo by Jeff Scher
The 2014 show, which takes place August 8-10, will feature more than 70 boats in the water and dozens more on land, plus more than 200 exhibitors displaying their wares in and around four huge tents in Rockland's Harbor Park. Special highlights will include a tent devoted to "Maine Made" products, a special tribute to Herreshoff-designed boats, and a "Smart, Small Homes" area dedicated to the art of living large within a smaller envelope. 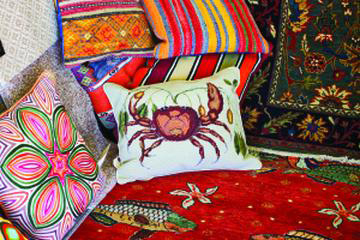 Photo by Emily Qualey
In addition to some great local food vendors, musicians including the Blue Hill Brass and the Bel Isle Trio will provide a festive backdrop during the three-day show. "This is a chance for readers of our magazine and people who love the Maine coast to meet many of the artisans they've read about in Maine Boats, Homes & Harbors and to see first-hand great Maine products," said MBH&H Publisher John K. Hanson, Jr. "This is the only boat show in Maine where people can see so many boats in the water all in one place," he added. 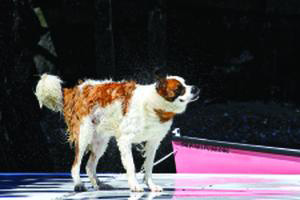 A Boatyard Dog Trials contestant dries off. Photo by Debra Bell, Bell Imaging
On Sunday morning, the waterfront will "go to the dogs" during the 12th Annual World Championship Boatyard Dog Trials. A half dozen pre-qualified dogs will compete by showing off their skills, while jumping in and out of a tippy rowboat and into the water, and surprising the crowd with quirky freestyle acts. Right-Sized Living for Today and Tomorrow 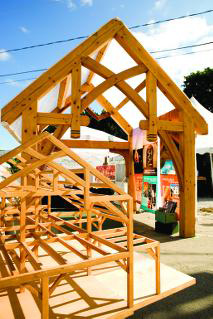 Exhibitors include home builders. Photo by Jeff Scher
Great design coupled with great technology can make for great living in small packages. The "Smart, Small Homes" area will feature a whole section dedicated to tiny houses, right-sized furniture and appliances, tents, houseboats, and more. "Sailors have known for years how comfortable life can be aboard a small boat, with all the amenities right at hand," said Hanson. These technologies translate well to life ashore, where there is a growing movement toward living life with a smaller footprint. The "Thoreau Multi-media Center" brought to you by AIA Maine, a chapter of the American Institute of Architects, will be at the center of this special exhibit. Electronic images of what a smart small home means to Maine architects today will be displayed in a timber-frame structure, based on the small cabin that Henry David Thoreau built on Walden Pond more than 150 years ago. "Stop by the center, and catch up with some of the brightest architects working in America today," Hanson said. In other structures on display, interior designers and builders will team up to show just what is possible when it comes to compact living spaces. In addition to home design, technology has evolved to enable incredibly efficient living spaces. From solar panels to efficient boilers, the section will showcase some of the cutting-edge systems in smart, small homes. The Genius of Herreshoff 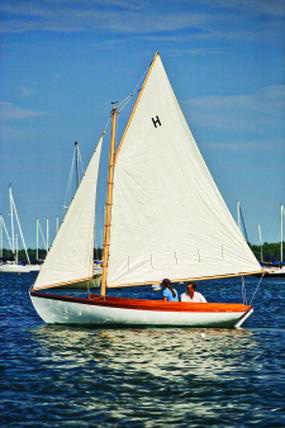 A Herreshoff 12½ under sail. Photo by Jeff Scher
No other family has impacted American boating culture quite like the Herreshoffs. Nathanael and his brother John formed the Herreshoff Manufacturing Company in Bristol, Rhode Island, in 1878. Their first successes came with steam engines and motor vessels. Their breakthroughs came with sailing yachts, including a handful of America's Cup defenders. With the design and construction of these state-of-the-art racers they developed much of the science of boat design and scantlings that the boatbuilding industry still works with today. Still, one of their smallest creations may be the most loved of all: the Herreshoff 12½, which turns 100 this summer. The Herrshoff design genius has influenced many of the H12½ offspring from the fiberglass Bullseye, a 12½ with a little cuddy; to the Haven 12½, a Joel White-designed centerboard version; to the brand new Chuck Paine-designed Paine 14. "We will be honoring this little boat and some of her equally old siblings, the Buzzards Bay 25 and the Newport 29," Hanson said. Representational boats will be displayed on the docks, plus a sampling of those influenced by the Herreshoff tradition.
Maine Boats, Homes & Harbors Show August 8-10, 2014 Harbor Park, Rockland, Maine Friday 10 a.m. - 6 p.m. Saturday 10 a.m. - 5 p.m. Sunday 10 a.m. - 4 p.m. Admission $12; children under 12 free. No pets on show grounds. www.maineboats.com 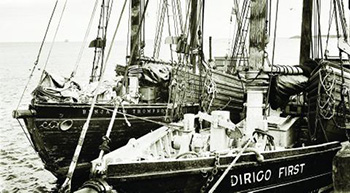 Early fishing trawlers on the Rockland waterfront included schooners such as the Benjamin Thompson and Dirigo First. Both were rigged as dory trawlers. Penobscot Marine Museum/Elmer Montgomery Collection
Until the mid-1930s, when the rise of the automobile changed everything, the Rockland waterfront was the heart of the city. The Eastern Steamship Line and its famous "Boston Boats" connected Rockland to Boston and the rest of the world by water. Both large and small ferries were a vital part of a system that linked all parts of the coast. The city was linked to inland destinations by the Maine Central Railroad. 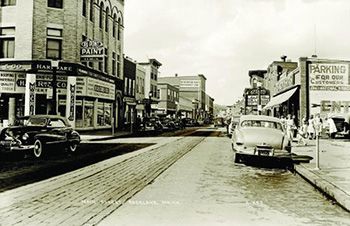 This view of downtown Rockland on Main Street looking north was taken around 1948. Of all the businesses shown, only the Strand Theater remains today. Penobscot Marine Museum/Eastern Collection
While the harbor has always been home to fishing vessels, shipyards, and commercial enterprises, in recent decades recreational boating has replace commercial boatbuilding and fishing as a major force. 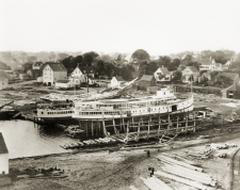 Steamboats on the ways at a waterfront yard. Penobscot Marine Museum
In the early days Rockland builders launched hundreds of schooners and clipper ships, including the record-setting Red Jacket, launched in 1853. By the mid-1900s, most of the yards had disappeared, with schooners being used for tourist trips instead of the delivery of essential goods. Still today, the city and the midcoast region are home to dozens of boatbuilders, including those in Rockland's land-locked industrial park, where vessels are built and restored, and then enjoyed up and down the coast, and beyond. 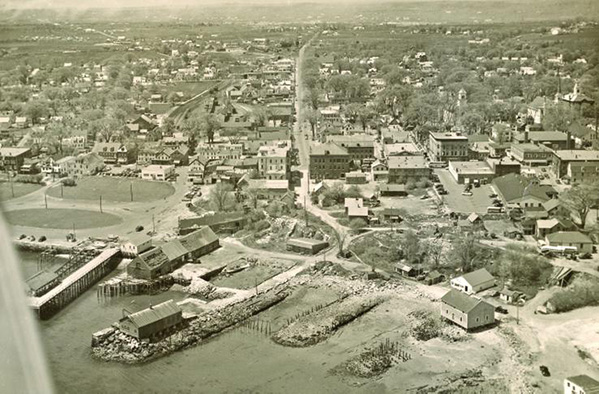 An aerial view from 1950 shows the section of the Rockland waterfront that is now home to the public landing-and the MBH&H Show. Penobscot Marine Museum

While You're in Rockland Always the rough-and-tumble cousin to Camden and Rockport, Rockland has undergone a transformation in recent years, fueled largely by the growth of the Farnsworth Art Museum and an entire crop of new restaurants, shops, and galleries, clustered along Main Street. The working waterfront remains, with plenty of fishermen and workboat skippers still using the wharfs off Tillson Avenue, but these days a variety of marinas cater to recreational craft of all sizes and shapes. "Rockland has it all, literally," said John Hanson, Publisher of Maine Boats, Homes & Harbors. "There's commercial maritime activity, yachting, boatbuilding, art, food, and it's a transportation hub with a huge harbor right in the middle of the best cruising grounds. We couldn't have picked a better place for the Maine Boats, Homes & Harbors Show." Visitors to Rockland should check out the city's iconic breakwater. The walk to the lighthouse on the end is exactly one-mile. And go out to eat! Rockland has earned a reputation as a food mecca. The chef's at Primo, Café Miranda, and Suzuki's Sushi Bar have all received national recognition. In addition to the Farnsworth, museums include the Lighthouse Museum and the nearby Owls Head Transportation Museum. If You Come By Boat... There are two general anchorages; the one in the northern part of the harbor behind the breakwater offers protection from easterly chop, and the other lies in the southern part and is sometimes affected by seas raised by winds from the northeast. The small-craft anchorage is in the western part and is convenient to local amenities. All are noted for excellent holding. Several marinas and boatyards serve the harbor and offer moorings, hull, engine, and electronic repairs. For a complete harbor guide, including tips about places to stay and information about local businesses, visit the Rockland Harbor section of www.usharbors.com. The Penobscot Bay Regional Chamber of Commerce also has helpful information at www.mainedreamvacation.com. The Rockland Harbormaster, Ed Glaser, can be reached on VHF 16 or by calling 207-594-0312. There are more than 100 moorings available for rent through the city, Journey's End Marina, Knight Marine Service, The Landings, and Ocean Pursuits. Boaters who want to come to the Maine Boats, Homes & Harbor Show by water should check with Ed Glaser. The Rockland Yacht Club operates a launch, which can take people from their yachts directly to the show grounds. The Rockland Yacht Club monitors VHF 9; the telephone number is 207-233-2800.