A bycatch of lobster fishing turns into a tasty meal

By Nancy Harmon Jenkins
By Nancy Harmon Jenkins I had a text message from my friend the food writer this spring: "Could you use some whelks?" "Yes," said I, always ready for a fresh challenge in the kitchen, "yes of course, but where are you?" "Fishing for lobster," came the reply. It stood to reason. That is the time of year when magazine and newspaper food editors start planning their summer issues and, surprising as it might seem in the chillier reaches of Penobscot Bay, that means an upcoming lobster feature for sure. So, even though many fishermen are reluctant to put their traps in the water before the end of June, a resourceful food writer, given an assignment, can usually find someone, even in late April, willing to haul a few traps for the camera. 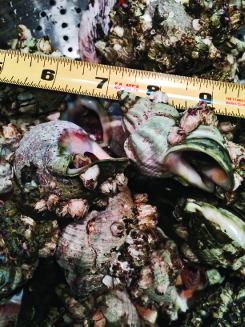 Whelks before cleaning. Photo by Nancy Harmon Jenkins
And so it came to pass: that evening my food-writing friend arrived for dinner with a treasure-trove of muddy, gnarly, intimidating whelks, 50 of them, the bycatch, so to speak, of her day fishing for lobster. 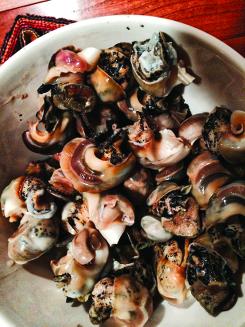