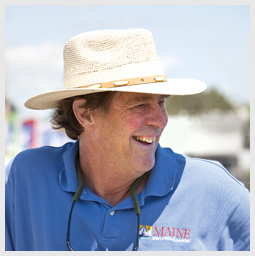 I believe in paddle power. I believe in sail. I believe in using the God-given gift of muscle and wind to move your boat from point A to point B. I also believe in putting the pedal down and having the wind roar through your hair with a snarling outboard behind as you skim across the water. I believe in the power of the 13-foot Boston Whaler and I finally have one. For 50 years I have wanted a Boston Whaler. As I grew older I thought about it less, but the desire never died-it just lay dormant. Recently, though, the 13-year-old voice inside me became more incessant. And I realized that wasn't just an echo of my own voice, but the harping of my 13-year-old son. For a while, I said no to his yearnings, as my father had said no many years before. "Go sailing," I said; "go rowing." Then this year something clicked. I have finally honored my inner 13 year old and my son. We bought a Boston Whaler, and not just any old used whaler. This one is rebuilt, beautifully restored by Coastal Boatworks of Newcastle, good as new, with new foam, new gelcoat, new cockpit sole, and elegantly varnished mahogany seats. This 1972 hull is ready to go. But my inner child has competition. My sons are operating like this boat is theirs. Adventures are being planned, companions lined up-so many freedoms to be explored. They will start on the lake, which holds all the promise of the wide ocean, but without the currents, tides, and fog. They will learn these, too, in time. The great British yacht designer, sailor and boatbuilder, Uffa Fox, wrote a wonderful book called Seamanlike Sense in Powercraft. This book examines the combinations of design details that make for a successful venture, the values taught by experience, and the right touch of speed and prudence. It is my hope that this new little boat will help my sons learn some of those important seamanlike skills and sense. In the meantime, my inner 13 year old cannot wait to get behind the wheel and go cruising. -JKH