Equally at home in the city and the woods, he has a passion for place

Joel Babb is known for large, highly detailed cityscapes, such as this one showing the Boston waterfront. Rowe’s Wharf from the Fan Pier, oil, 24" x 48", 2007. Paintings courtesy Vose Galleries Boston (3)

One day a few summers ago Joel Babb was painting in his canoe on the Nezinscot River near his home in East Sumner, in Maine’s Oxford County. He was beginning to understand why so many Impressionist and Barbizon School painters of the nineteenth century had houseboat studios: they offered a means of entering the landscape unlike any other.

At some point, Babb pulled up to the riverbank to stretch his legs. As he looked back at the canoe, his easel in it, and the curving river beyond, he realized that here was a terrific subject, “a reflection on the whole experience of painting outside.”

Babb photographed the scene. Back in his studio, instead of creating a meticulous under-painting as he would normally with a large landscape, he used big brushes and a knife to simulate how he would work en plein air, quickly and freely, using the photograph as a reference.

This approach offered more than just an interlude from the highly detailed topographical cityscapes for which Babb is known. The painter found the work reinvigorating. “It brought back the joy of painting again,” he said. That joy carried over to other images of easels outdoors—on Mount Desert Island and alongside brooks in his neck of interior Maine—and it added energy to his studio work. 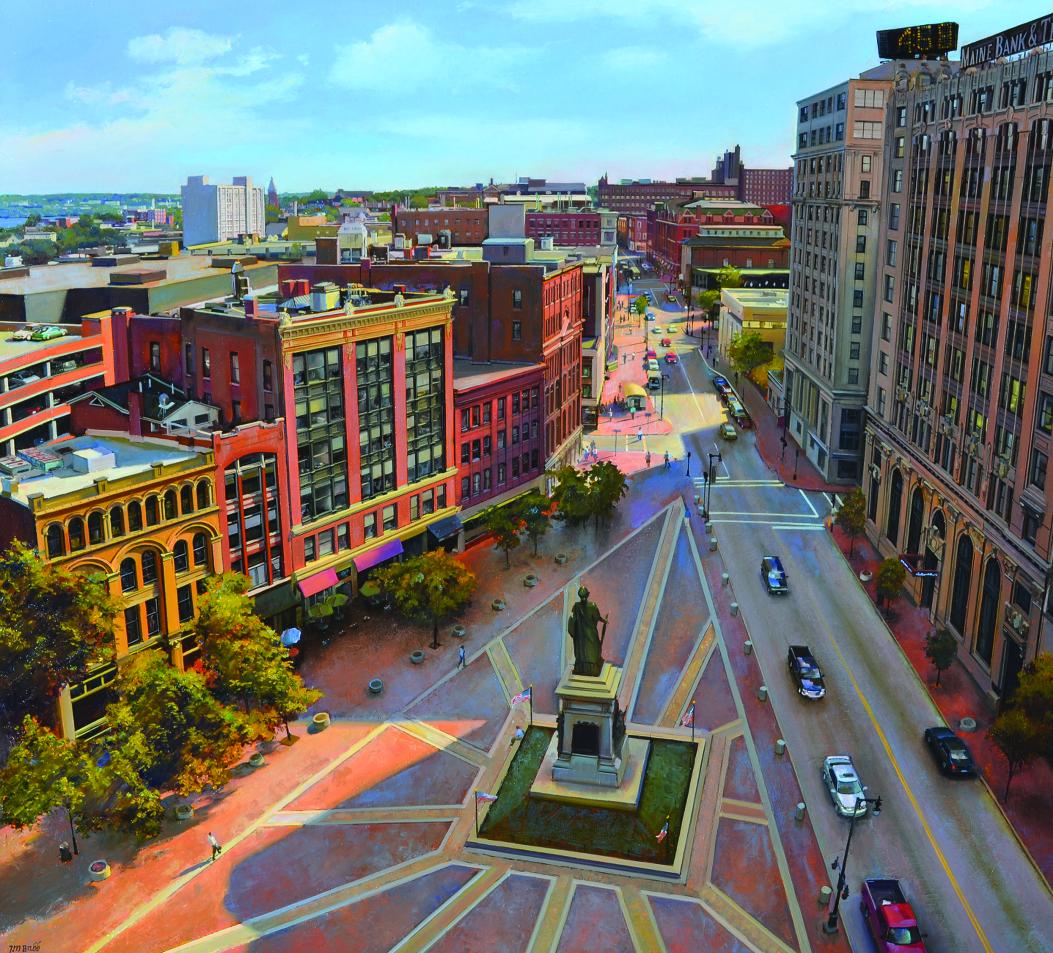 Babb is not new to working outdoors; he painted 50 or so works on site in Rome about ten years ago. Color becomes intoxicating when he is outside under a white umbrella, he said. “You are dealing with a Niagara of light, which is always changing minute to minute.” By contrast, when working in the studio, especially with photographs, he can explore “the fine structure and the complexity of things.”

Born in Waycross, Georgia, in 1947, Babb went through various phases as he developed as a painter, influenced by what he found in magazines. As an undergraduate at Princeton University, he immersed himself in the study of art history while making forays into modern art (famed sculptor George Segal was one of his teachers). Then a year-long stay in Europe following his 1969 graduation set him on a course he’s been following ever since. Confronted by the detailed, literal canvases of the old masters, Babb chose to learn the ways of realism. When he returned to the United States, he studied and then taught at the School of the Museum of Fine Arts in Boston. He went on to teach at the Harvard University Extension School for 16 years.

Babb’s life revolved around the Museum of Fine Arts. He studied, worked, and met many of his friends and his wife there (Frannie Babb was the book buyer in the museum bookstore).

Over time Babb became a consummate representational painter; his landscapes of Boston, sometimes based on photographs and sketches made from the air or tall buildings, are considered among the finest achievements of their kind. His skill at rendering seemingly impossibly detailed sections of the city led to a number of major commissions for cityscapes, which can be found in hotels, hospitals, and financial institutions in and around Cambridge and Boston.

He began coming to Maine in 1971. A fellow museum employee George Wilkinson and his wife, Mary, had purchased a farmstead in East Sumner and invited him to visit. Originally called West Butterfield Plantation, East Sumner consists of farms and woodland bisected by two branches of the Nezinscot, which runs into the Androscoggin River.

In 1975, Wilkinson gave Babb an acre of land. Not long after, Babb began to assemble a residence, beginning with a one-room cabin. He added a studio, constructing the windows and most of the interior walls from scavenged materials.

The next part of this home in the woods came from an unusual source. In 1988, the MFA invited master metalsmith Gassan Sadaichi to create a sword as part of an exhibition. The museum built a workshop in its courtyard to accommodate the visiting craftsman. At the end of the show, the structure was put up for sale by sealed bid. The Babbs won it and moved it to East Sumner.

As part of his early work in Maine, Babb did a canvas of Bath Iron Works, titled The Iron Works, 1979. He would return to BIW to paint Leviathans—The Bath Iron Works, 1994, which was acquired by the philanthropist Elizabeth Noyce and donated to the Maine Maritime Academy in Castine.

Somewhat paradoxically, Babb found himself painting mostly cityscapes in his East Sumner retreat. Over time, however, he began to have success working outdoors with oil paints. His first on-site pieces were small oils done in Sumner and on the Maine coast. Since then he has produced major paintings inspired by a wide range of motifs: streams in the Mahoosuc Range, Gulf Hagas, Morrill Farm, Otter Cliffs in Acadia National Park.

In the summer Babb spends sunny days painting outdoors. In recent years he has explored the Androscoggin River, paddling and painting. “The old malodorous toxic foam bath of yore kept the riverfront from being built up,” he noted. Thanks to the Androscoggin Land Trust a good bit of that frontage is now conserved. The trust reproduced on a notecard a large painting he made of the view from beneath silver maples looking toward the Stevens Island Rivershore Preserve in Canton.

Babb has struck up a relatively new friendship with the biologist, author, and long-distance runner Bernd Heinrich, who wrote A Year in the Maine Woods, among numerous books about the natural world. “I feel fortunate that a living Thoreau is nearby,” said the painter. The two have corresponded and Babb has made two paintings of Alder Brook, which runs through his friend’s property. Heinrich’s ability to make “endless discoveries” on his own land has inspired Babb to embrace a similar perspective for his art. “One can find and state the working of eternal cosmic forces by rightly observing a small corner of the universe,” Babb said.

Babb relishes his encounters with Heinrich, including an off-chance meeting one day last winter when he went to photograph the brook in the snow. As he skied along a logging road, he spied his friend on snowshoes on the other side of the brook. “The exclamation ‘What are the chances of that!’ led Bernd to calculate the probability [of our meeting],” Babb recalled, “and inspired a long reflection on statistical probabilities throughout the complexities of nature.” 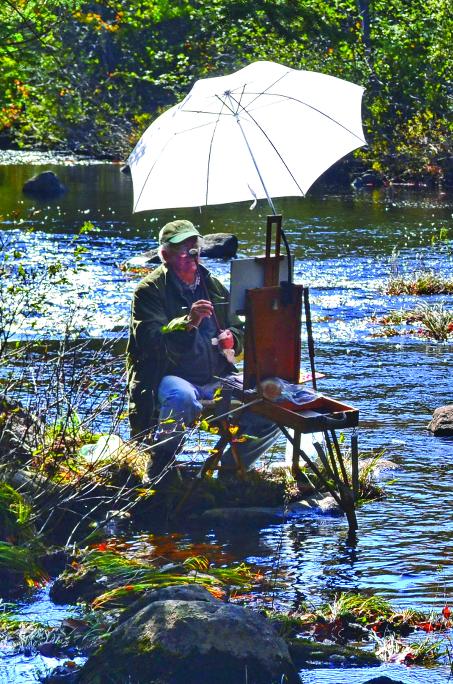 The painter also gets pleasure from being out in the woods with his German shepherd Brueghel and not meeting anyone all day long. Inspired by Heinrich’s absorption in nature and by the writing of his friend Carl Straub, a professor of religion at Bates College, Babb has been trying to take his understanding of nature to a new level in his painting.

At the same time, he has not turned his back on city subjects.

For the 2014 Portland Biennial at Greenhut Galleries, he painted a view of Monument Square from above, looking down Congress Street—over the shoulder, as it were, of the Portland Soldiers and Sailors Monument that stands in the middle of the square. The artist has always been fond of finding unusual perspectives on familiar places. While living in Boston he hired a helicopter to photograph the city from the air; and for a series of paintings of the mills in Lewiston he leased a plane. 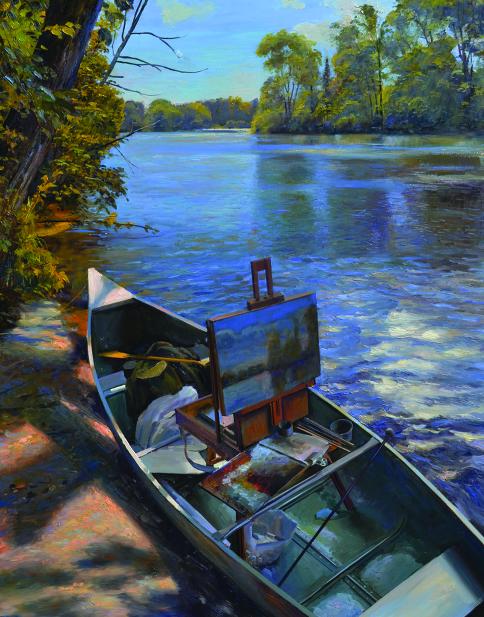 Babb painted his own canoe and easel as a way to illustrate the artistic process at work. Painting in a Canoe, Nezinscot River, Turner, Maine, oil, 53" x 42", 2010.

Although Babb has been painting for much of his life, he continues to immerse himself in the history of art. On a trip to London last year, he spent whole days in museums studying Titian, Rubens, Turner, Constable, and other masters. A large painting of Heinrich’s brook, which he finished after returning from London, was, he said, “transformed by studying Constable’s sparkling light in foliage.”

Babb has lived in East Sumner long enough to feel that he is becoming one of “the old characters” in the town. Having moved around a lot as a child, and having spent a part of his life in cities, he has come to appreciate what he calls “the depth of memory” that develops while living in a small place over time. He is amazed at the rate of change in the fields and streams, and how fluid the landscape is. He finds the same phenomenon among the townsfolk: “The boy whose father died working in the woods while his mother was pregnant with him is now a 30-year-old standing next to you in line at the benefit supper,” he said.

In 2009, Babb built a new studio, a spacious atelier with a lot of light. When it was constructed, large pines near the building were supposed to be cut down, but that never happened. The painter is glad: he loves looking up into the trees, watching the light change among the boughs or the snow falling through them. This is just the sort of setting that inspires his world vision.

Carl Little is the author of Nature & Culture: The Art of Joel Babb (University of New England Press).