Playing the game the way it should be played 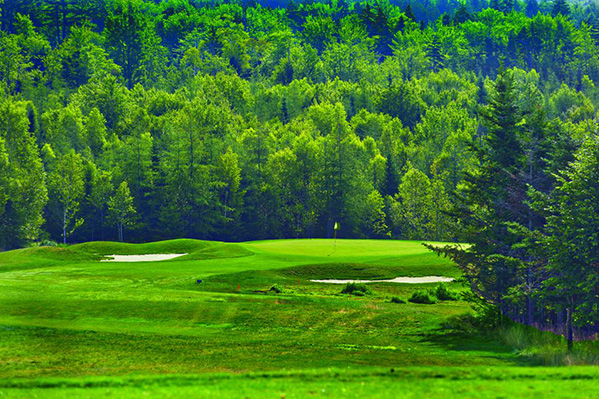 The 8th hole of the newly renovated Island Country Club Golf Course is a par 5 of 488 yards that curls around a marsh. Photo by samdavidphotography.com
On one of my first rounds of golf at Island Country Club, I teed it up in the annual Howdy Thompson tournament, carrying only a wood, a 6-iron, and a putter. Those were the clubs preferred by Howdy himself, a lobsterman who liked to go out for an evening round in his rubber boots and bib overalls. He seems to have been the Seve Ballesteros of Deer Isle, able to improvise any shot necessary with those three clubs. When the tournament was over, I gracelessly suggested that the Country Club might want to add a fourth club, a wedge. The idea was batted down instantly and decisively. The Island Country Club in Deer Isle is staunch in its traditions. Those traditions are unique, a blend of social and sporting events that embrace all elements of the diverse Deer Isle community. The landscape of this rural island is still dotted with barns and farmhouses, and the area has attracted summer residents for more than a century. The nearby town of Stonington, with its quarries and large fleet of lobsterboats, is very much a working town with a bustling harbor. The presence of the Haystack Mountain School of Crafts has led to the development of a thriving arts scene. 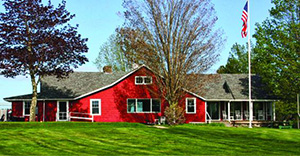 The cozy clubhouse has been added onto over the years but retains its down-to-earth charm. Photo by Jon Hellstedt
There is a fine balance of risk and reward, and the small, lively greens demand precision with the wedge and the putter. The holes are threaded through a classic Maine landscape of birch, spruce, and pine, and the air carries the fresh smell of the sea. Visitors pay $40 for 18 holes, using different tees for each nine. For members the rates seem impossibly low: for a family the full-season fee is $1,125, for an individual $615. The most astounding rate of all is for junior members: $135 for the season. 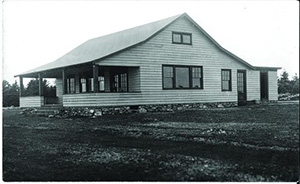 The Island Country Club's clubhouse as it looked just after it was built in 1926. Photo courtesy of Island Country Club
The golf calendar runs from mid-June to late September and lists 12 tournaments, four of them women's events. On top of that, there are regular weekly events for men, women, and couples. The Deer Isle-Stonington High School team uses the course and its members play for free; groups of youngsters roam the place with bags slung over their shoulders; the look in their eyes is the bright, determined look of kids who are planning to play 36 or 54 holes in a day, and loving every minute of it. The Island Country Club dates back to the 1920s, but the golf wasn't always as good as it is now. The club was formed by a group of summer residents who had high hopes for their course. They commissioned Wayne Stiles, the pre-eminent New England golf architect of the day, to design a nine-hole course, but they didn't have the land needed to implement the full design. The club opened in 1928 with only five holes; a year later, the club had a nine-hole course, but it was much smaller than the one Stiles had envisioned, consisting of five short par 3s and four short par 4s. That's how matters stood until 2009 when Ross Forbes was engaged to renovate the course. The club's long-term planning committee-led by Bill Whitman, a member whose family could trace its Deer Isle roots back to the early 19th century-had been exploring design ideas and acquiring adjacent parcels of land that would allow for significant expansion. A golf architect who has built notable courses on several continents, but happens to be based in New England, Forbes has a particular affinity for the work of Wayne Stiles. His first exposure to golf came as a caddy at a nine-holer at a grand old New England resort, the Mountain View Hotel. Forbes won over the committee with a plan for a substantial nine-hole course that would be sensitive to the character of the property, require the use of just about every club in the bag, and remain faithful to the spirit of Stiles. The course had changed over the years. There may have been some of Stiles' original elements remaining, Forbes said, but it was impossible to be sure. "There were a few green sites that looked as though they might be his-they were placed in a way that showed a real sense of design, something that a local group wouldn't necessarily have had. Where I found features like that, I tried to keep them," he said. "But for the most part, I was building holes and trying to make them look like something Stiles would have built." Forbes used the features of the rugged property-the hilly terrain, the stands of trees, the marshy areas-to give character to each hole. The sixth hole is probably the prettiest on the course, a 140-yard par 3 with the green sitting sweetly in a bowl fringed with fescue; the seventh is a scary downhill par 4 of 268 yards that cries out to be driven, even though the fairway twists and tumbles and out-of-bound stakes crowd the left side of the green; the eighth is a par 5 of 488 yards that curls around a marsh. And so it goes, with each hole its own arena. Maybe it's just nostalgia, but I was smitten with the Island Country Club. It reminded me a little of the nine-holer where I learned the game, playing from dawn to dusk on long summer days, and it reminded me too of those small, out-of-the-way clubs in Scotland that I visited way back in the 1960s. Although the club's short season ends in the fall, the course remains open year-round. During the winter, when there's no snow on the ground, a few hard-core golfers show up to play, and they drop their greens fee in an honor box. An honor box! It is just one more detail that makes me want to return to Deer Isle. The Island Country Club might be a throwback, but I hope that clubs exactly like it are a part of golf's future. It's affordable and accessible, the kind of place where golfers of all ages and abilities can enjoy the ancient game. More selfishly, I hope the club is a part of my future. I'm pretty sure I can scrape together the money for a season membership, and I want another crack at driving that seventh green. I'd like to be part of a club where the course is imbued with charm and the game is played in a rare spirit of uncomplicated fun. Stephen Goodwin, the author of Dream Golf: The Making of Bandon Dunes (Algonquin Books, 2006), has written about golf course architecture for national and regional magazines. He teaches writing at George Mason University. **BONUS CONTENT: A guide to golfing by the water in Maine For More Information: The Island County Club 442 Sunset Road Deer Isle, Maine www.islandcountryclub.net 207-348-2379