A stroll in the woods is all you need

"Earth's crammed with heaven; and every common bush afire with God; and only he who sees takes off his shoes; the rest sit round it and pluck blackberries." -Elizabeth Barrett Browning, 1806-1861 We are told that Moses was out seeing for himself when he saw a burning bush. God spoke to Moses, not through any book or priest or church, but in the form of a living plant on fire. This is the elegance of myth because this is precisely a description of plant metabolism: every plant is doing a slow burn as carbon, and water and sunlight are synthesized by chlorophyll into sugars which the plant burns to fuel its life. Every bush, then, is a burning bush. Every shrub is a revelation. To say that the creator can truly be revealed only in books, as many religions have insisted through the ages, is a little like saying that, even if you live right across the street from Fenway Park and have a lifetime free pass, the best way to follow the Red Sox is to read about them in the papers. To say that spirit can be revealed only in scripture is to say that there is no revelation unless some human scribe is on hand to write it down. The creator of heaven and earth is reduced to the condition of an illiterate applicant for the position of deity who must beg some clever mortal to do all the paperwork for him. This is, of course, ridiculous. And it is one of the marvels of human arrogance that claims of revelation through scripture alone, still heard today, are not seen for the self-serving folly that they are. 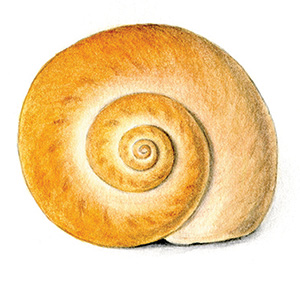 Illustration by Candice Hutchison
While walking I tend to be curious about things around me-unfortunately also while driving, which is why so few like to ride with me anymore. Curiosity shows the careful observer that every flaming leaf reveals something new, about itself and other things. Like people, everything in the universe resembles something else. A leaf is like a tree, is like a lung, is like a river delta, is like a bolt of lightning. A star is like a starfish, is like an apple blossom, is like the seed case at the center of the apple. The way the hands go around on an analog clock is analogous to the way the earth turns through the day, and the way the sun and moon seem to move through the sky. The way water goes down the drain is the way a galaxy spins in space, is the way a snail shell grows, is the way the seeds are arranged in the sunflower, is the way history progresses through time. A cloud of dust is like a cloud of smoke, is like a cloud of water vapor, is like a cloud of ignorance. Each of these things is a revelation about something else. All these and countless other analogies reveal that we live in a poetic/analog, far more than a literal/digital, universe.

Curiosity shows the careful observer that every flaming leaf reveals something new, about itself and other things. Like people, everything in the universe resembles something else.
There is no clearer truth than that revealed in nature without mediating language, books or interpreters, priests or experts, without propaganda, dogma or bias. In nature the only author is the creator, the only media are primal sound, smell, taste, texture, and light. "The Creation speaks a universal language… which every man can read," says Thomas Paine. "It cannot be forged; it cannot be counterfeited; it cannot be lost; it cannot be altered; it cannot be suppressed." It also cannot be biased, censored, tweaked, Photoshopped, or spun. Everything we see along the way teaches truths about other things we can see, and even things we cannot. Have you a burdensome problem, an aching question, a cosmic riddle? Close your book, shut off your computer, leave your iPhone, open your door and go. Out there you will find all the truth you will ever need. 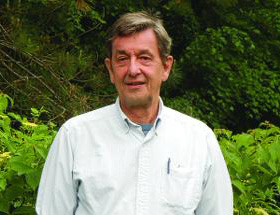 Photo by Rebecca Haley McCall
Rob McCall has been musing about the natural and spiritual worlds in columns for local Maine papers since the 1970s, and in Maine Boats, Homes & Harbors since 1999. Minister at the Blue Hill Congregational Church for 28 years, he plans to step down this fall, but will continue to share his observations in the Awanadjo Almanack. A graduate of the Harvard Divinity School, he is the author of two books, most recently Great Speckled Bird: Confessions of a Village Preacher. He and his wife, Rebecca Haley McCall, who is an artist, built a camp on Cobscook Bay in 1980 and later bought a house in Eastport in 1998. The couple plans to move into that circa-1820 cape on Moose Island, with its views out over Passamaquoddy Bay and Campobello Island, before the snow flies. From there, McCall will keep trying to capture the meeting of spirit and nature and bring it back to feed friends, relatives, and faithful readers. -The Editors