By Peter Bass
Coffee brandy wars, ships of cardboard, the Hinckley touch Now that you have purchased a new Maine-built boat at the recent Maine Boatbuilders Show in Portland, it is high time to plan the summer's activities. Remember that on the first of June all of summer is still in the bank, and any withdrawals you make before the Fourth of July do not affect the opening balance. I assume that you spent the month of April planning your summer cruises and inputting all the waypoints into your new chart plotter. Don't forget to take paper charts along, as well. Remember to keep those fenders aboard and docklines stowed. Just because you are doing your part to pull the boat business out of the Great Recession doesn't mean that you'll get a free pass steaming by the porch. We turn a blind eye to high crimes and misdemeanors, but not to dangling fenders and Irish pennants. There was a lot of news to follow this spring, including the lingering whale of a winter, also known as the "tease and freeze." In my winter quarters in the mid-Atlantic we had three opportunities to shovel snow. At least I still own a snow shovel. Let's party 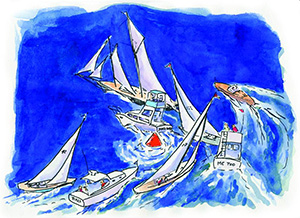 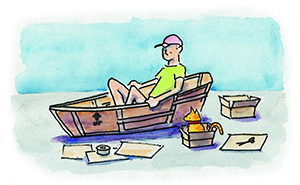 Illustration by Ted Walsh
The challenge is to build a boat in three hours, have lunch, don several lifejackets and navigate a short course, or some portion thereof. All materials and instruction will be provided. A paddle and row event for more seaworthy craft is also planned. See: compassproject.org. The lobster-catching cat Several times we have written about the use of a power catamaran as an appropriate and more fuel-efficient platform to catch lobsters. The first time was an April Fool's Day article that was an homage to George Plimpton and his April 1 spoof of baseball phenom Sid Finch in Sports Illustrated. More recently we reported on a serious effort by Penobscot East Resource Center and naval architect Doug Read of Maine Maritime Academy. That design recently finished tanks tests, but no word on when one might be built. Another entrant into the field turned up at the Maine Fisherman's Forum in February, according to an article in Working Waterfront. A Montreal firm showed a model that it claims will be available for initial trials in September on Lake Champlain. Other than the model, there is little information in the public domain-no website, no renderings, nada. The boat seems to be derived from a UK model called a Pro Cat and licensed to the Montreal firm, Magipati International. Who will be the first lobsterman to show up in a multihull? Stay tuned. Over the Bar Noted New Hampshire wooden boatbuilder and long-time instructor at the WoodenBoat School summer programs, Gordon "Swifty" Swift, died in February at 89. He began his career in boatbuilding working for Bud McIntosh in 1965 at the McIntosh yard in Dover, New Hampshire. In 1976 he established Swift Custom Boats in Newington, operating that for 30 years. An Internet search reveals several Joel White designs built by Swift that are simply stunning. Quite a life. Our other marine icon sailing on into the beyond is Hobie Alter, who died at 80 in March. One of the original inductees into the National Sailing Hall of Fame, he made his reputation early on as a surfboard manufacturer, whose use of foam and fiberglass anticipated those materials in today's composite boatbuilding. His need for something to play with when the offshore wind flattened the surf led to the Hobie Cat. The rest is history. Go forth and enjoy summer The summer is now upon us and with it comes your chance to become a marine icon yourself. So launch that boat and have at it. A penny saved may be a penny earned, but where's the fun in that? A penny spent on boating is just the beginning. Keep those fenders aboard and those docklines coiled. The porch at last is full of friends The ice is cracked, the limes are cut The dock is in, the boat out front It all seems nearly perfect but, The peace is broken by the sound Of go-fast boats with straight through pipes And girls in thongs just holding on Then oh too quickly out of sight. Old guys in rockers settle in Calm racing hearts with sips of gin In freshly painted rockers steady Feet up, binoculars at ready.

Illustrations by Ted Walsh Contributing Editor Peter Bass was last seen boarding a double-hulled amphibious UFO, with a healthy supply of seafood, Allen's Coffee Flavored Brandy, and a book about dockline etiquette to share with the intergalactic community at large. To submit your comments... newsy tidbits, photos, illustrations, clippings, rants, and raves for possible use in this column, use the form below. Or mail to “View From the Porch,” P.O. Box 566, Rockland, ME 04841 or fax to 207-593-0026. Items may be edited for length and clarity; materials become the property of Maine Boats, Homes & Harbors, Inc.