By Sandra L. Oliver
By Sandra L. Oliver No, not that very modern Martha-a much earlier Martha, who lived on Maine's frontier out by Hallowell and Augusta at the turn of the eighteenth century. We're talking about Martha Ballard, midwife, health-care provider, mother, gardener, housewife, and prodigious diary keeper from 1785, when she was 50, until her death in 1812. 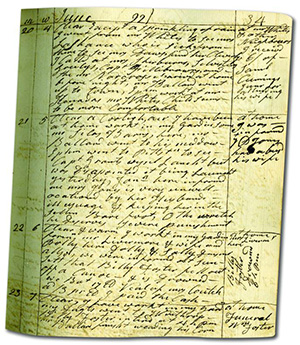 June 21, 1792 Martha Ballard's diaries are in the collection of the Maine State Library. This excerpt is from the first day of summer, June 21, 1792: "Clear, a Coolish air. I have been a' home, workt in my Gardin Some. Mr. Silas Barns here. Mr. Ballard went to his meadow. Ephm went to Pittstn to see Capt Grants vessel Launch but was disappointed, it being Launcht yester day." Courtesy of the Maine State Library
It is fun to snoop into someone's ancient diary, to catch the rhythm of their daily life, to note things that never change, and other activities so different from modern life that we're reminded that sometimes the past is like a foreign country. Martha Ballard's actual diary, made famous by Laurel Thatcher Ulrich's Pulitzer Prize-winning book, A Midwife's Tale: The Life of Martha Ballard and Her Diary, 1785-1812, resides in the collection of the Maine State Library in Augusta, Maine. Fortunately, the diary is available online, where the curious can browse through it. It survived, fragile as it is, because it was passed down in her family, and was preserved because genealogists value the many births and deaths that Martha recorded. 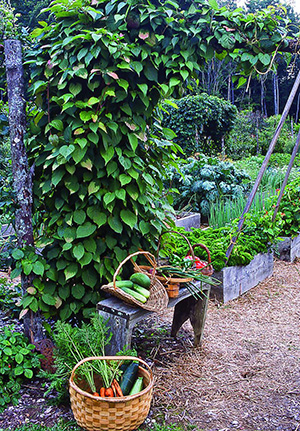 Ballard's journals continue to inspire gardens like this one planted by Eliza Soeth of Friendship, Maine. Photo by Lynn Karlin
I was drawn to it because it also is a wonderful way to learn about early gardens and food preparation. Martha, bless her hand-knit stockings, wrote about what she cooked and ate between delivering babies and visiting the sick; sometimes falling off her horse en route. She wrote about perfectly familiar food: beef, pork, veal, salmon, corn, pumpkins, and such vegetables as cabbage, potatoes, and cucumbers. Less familiar are terms like "haslet," a now-archaic term for offal, the edible viscera of newly slaughtered animals, such as liver, kidneys, and sweetbreads. She also recorded her housework, planting, harvesting, knitting and weaving, company visits for tea and overnights, visits from people seeking remedies, and community news: marriages, drownings, murders, court sessions, vessel arrivals and departures, funerals, and weather reports. In all during the 27 years she kept her journal, she wrote 9,965 entries.