How we got a boat and finally met our neighbors 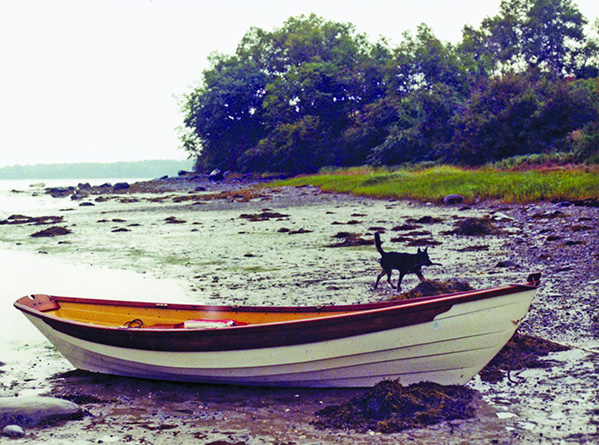 Photos courtesy of Brooke Williams (2)
By Brooke Williams Nobody talked to my husband and me the first year we moved to Cushing, Maine. In fairness, we lived at the end of the peninsula and seldom had the opportunity to actually run into anyone. It was 1998, before the town office existed, and Fales General Store was closed by the time we got home from work. Our neighbor's house was shrouded by a massive forsythia hedge, deterring any possibility of chitchat or bumping into someone taking out the trash. After living in Manhattan in an apartment building, above and below people who never even smiled in the hallway, I understood anonymity. While I couldn't see my new neighbors, I knew we were all looking out at the same water view, our perspectives varying, depending on where we stood. The more I watched the tide undulate in and out of our cove along the St. George River, the more I decompressed, until my Midwesterner roots triumphed, and I desperately wanted to be neighborly. But how? In the fall, after we traded our SUV for a Ford pickup, people began to wave as we passed on the road. Palm extended slightly above the steering wheel, the gesture looked like more of a reflex than a cheery salutation, but it encouraged me. "You have to make it through a winter before people will actually talk to you," advised my friend David who was also from away. That or get a boat. The day Christopher motored into the cove in a wooden dory, our neighbor Jay greeted us for the first time. I'd been staring out the window for hours, frantically scanning the horizon for Christopher who had launched the boat up river in Thomaston. In New York City, we were always on the lookout for things that could kill us-typically that did not include the weather. Based on our experience, getting mugged at the town boat ramp would have seemed more likely than being swept out to sea. Even though dark clouds loomed on the horizon, Christopher had launched the boat as planned. Halfway down the river, the lightning started. Christopher threw his watch and metal oar locks to the bow of the boat and huddled in the stern with our dog, Hondo, both certain they were goners. Somehow he still managed to look seaworthy when he finally pulled into the cove. Jay got to the shore before me. 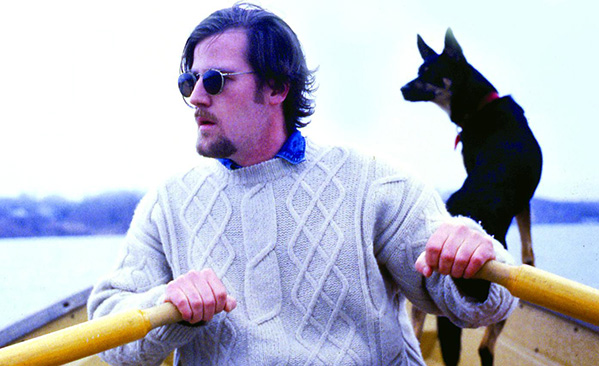 The author's husband, Christopher Burke, was given the 16' Swampscott Dory. He has since traded up for a 1955 Wolverine Wagemaker with a 1956 Johnson Javelin outboard. Here he is rowing his dory with the couple’s dog, Hondo. Photos courtesy of Brooke Williams (2)
"Nice boat," he called out, helping Christopher pull the vessel onto the mudflats. A Swampscott Dory with teak trim, the boat was striking. It had been given to Christopher as payment for a marketing job. We'd taken it out on a few lakes in New Jersey, but Christopher's boating experience was largely limited to the swashbuckling adventure books he had read while growing up in landlocked Ohio. Thanks to his Irish roots and marketing background, Christopher can talk about anything with a little authority, even if not backed up with actual experience. As Jay chatted about his sailboat moored in the cove, Christopher nodded knowingly, adding random tidbits about things like the high lead content in marine paint as he busied himself bailing water from the dory, putting the oars in place, and wiping down the wooden seats-everything but the real job at hand, which was to secure the boat to shore. A woman would have no qualms about announcing it was her first time anchoring a boat on a tidal river, or asking for advice on the best location to tie off and with what knot. Christopher, on the other hand, wished Jay would go away, preferring to risk his boat, over his manhood. When Jay launched into another boat story, Christopher finally headed to the closest tree and started wrapping his rope around and around the trunk. Jay cocked his head to the side, but kept talking about outboard motors, as Christopher triple-knotted the ropes like he was tying a pair of sneakers. A memory of a fight we'd had on the side of the road after I sought another man's advice on fixing our flat tire kept me silent. Fascinated, I observed the two men like Dian Fossey studying the habits of the silverback gorillas. Jay and Christopher shook hands before starting back up the hill together until the path diverged to our respective backyards, and views of the cove. A few hours later, as the tide receded, Christopher and I checked on the boat, half expecting it to be gone. Not only was it still there, the lines had been retied with a single, crisp knot. I always assumed it was Jay trying to show Christopher the right way to secure the boat while allowing him to save face. Christopher was convinced it was Richard, the lobsterman who also moored in the cove, telling Christopher, discretely but directly, how to keep his boat from crashing into his. Whatever the case, the lesson was unspoken, loudly, in a language even more Maine than male. Brooke Williams now lives and writes in Thomaston. Her work has aired on NPR and has been published in the Christian Science Monitor, The Washington Post, The New York Times, and Down East Magazine.