Following World War II, a steady stream of black visitors began to show up at a modest house on Route 103 in Kittery, Maine, owned by an African American couple named Hazel and Clayton Sinclair.

The visitors were not part of the Sinclairs’ extended family, nor part of some sort of underground railroad, as at least one local history book speculated. Rather, from 1948 to 1976, the Sinclairs’ home was also a seasonal guesthouse where African Americans who came to vacation in southern Maine knew they could be comfortable and safe. Known as “Rock Rest,” it was one of many black-owned and -operated businesses that thrived nationwide during the post-war years until the Civil Rights Act of 1964 outlawed discrimination in public accommodations. 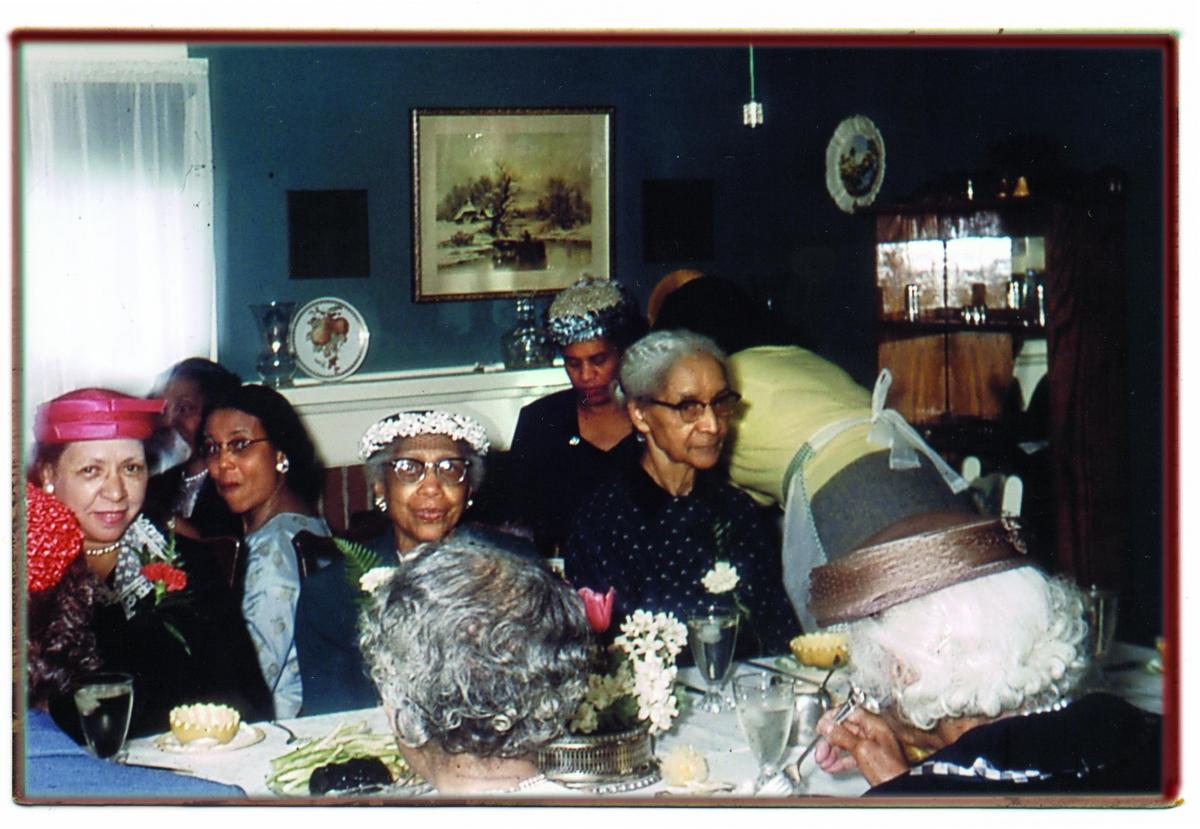 A group of African American women from the Boston area came to Rock Rest annually for many years to enjoy a weekend in Maine and Hazel’s good cooking. Photograph courtesy of the Portsmouth Black Heritage Trail

“Most Americans don’t realize how African Americans had to make plans and organize their travels in advance to protect themselves,” said Bill Pretzer, supervisory curator at the Smithsonian’s new National Museum of African American History and Culture. The museum, which is due to open in Washington, D.C., in 2015, will include items from Rock Rest. 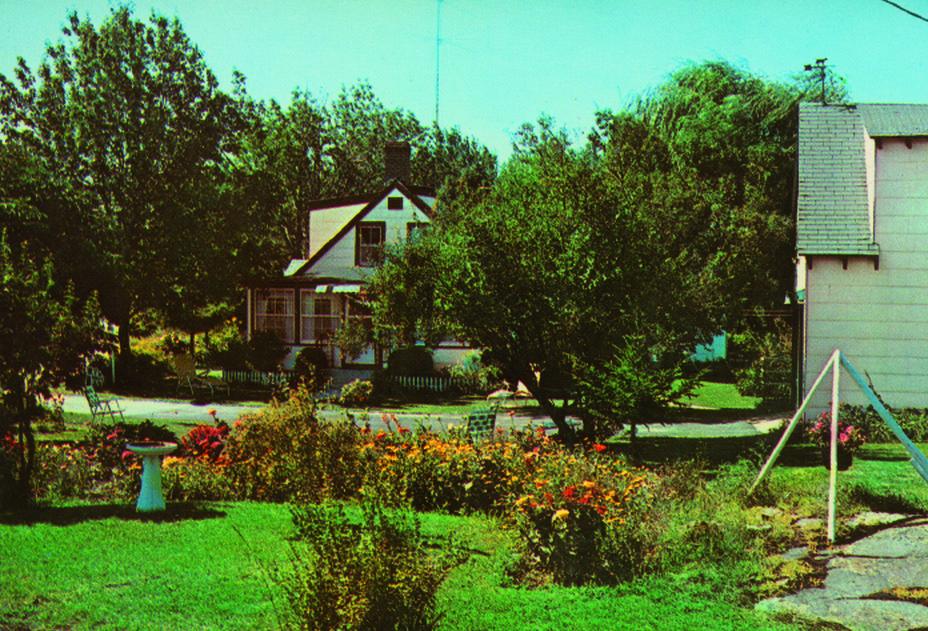 The Sinclairs used this full-color postcard as their only advertisement for Rock Rest. Otherwise, they relied on word of mouth. Photograph courtesy of the Portsmouth Black Heritage Trail “They had to arrange very specifically where they could stay, where to buy gas—on any kind of travel, not just vacation—and yet they found and created places where they were able to enjoy themselves and be comfortable,” he said. “Very little of this is understood by whites.”

Those destinations included Idlewild, a resort in Michigan that was popular with big-name entertainers who vacationed and performed there in Las Vegas-style shows. Another was the town of Oak Bluffs on Martha’s Vineyard. But all over the country, there also were small inns like Rock Rest.

Although Maine did not have ‘Jim Crow’ laws on the books, there was
de facto segregation here, historians note. African American tourists were routinely refused lodging, meals, even gas station fill-ups, simply because of their skin color. Statewide, Maine’s black population was small, roughly doubling from 1,221 (or one percent) in 1950 to 2,800 (three percent) in 1970, according to the United States Census.

In 1962 an African American actress with a touring company at the Ogunquit Playhouse was refused by seven local hotels. Even celebrated musicians who played at the casino in Old Orchard Beach—Duke Ellington, Cab Calloway, Count Basie, and Lionel Hampton—had to seek lodgings or a rehearsal piano at the black-owned Cummings Guest House, or another of the few black-owned venues nearby. In York there was the Jewell Inn (now gone), a small resort where the dining room, jukebox, and dance floor made it a lively place on Saturday nights.

The Cummings Guest House was booked solid from May to September for decades, with hundreds of names appearing in the guest register, noted Christi Mitchell, architectural historian with the Maine Historic Preservation Commission. Yet it was never listed by H.A. Manning Co.’s town directory among the “102 hotels in Old Orchard Beach with about 6,000 rooms…giving the second largest capacity of any beach resort except Atlantic City on the Atlantic Coast,” she said. “Nor was it included in the town’s vast quantity of promotional materials or listed among lodgings in the Maine Register.”

Since 2007, both Cummings Guest House and Rock Rest have been on the National Register of Historic Places.

Rock Rest never advertised except for postcards made available to its guests. The owners instead relied on word of mouth to spread their reputation for warm hospitality and Hazel’s fine cooking. Black communities throughout the country had informal networks in which spare bedrooms in private homes were readied for neighbors’ visiting relatives and friends when established guesthouses were full. That’s how the Sinclairs’ business began. 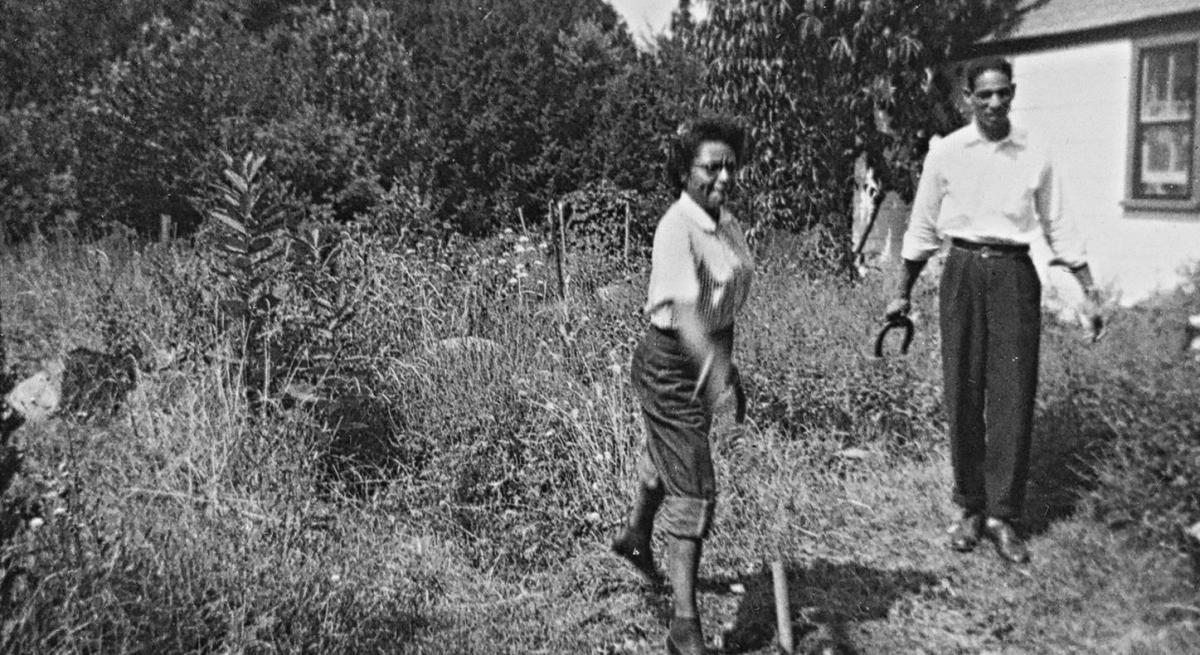 Visitors to Rock Rest enjoyed all the pleasures of a Maine seacoast vacation, from horseshoes to clambakes and fishing. Photograph courtesy of the Portsmouth Black Heritage Trail

Eventually, specialized tourist guidebooks were published for African Americans. In 1946, the Negro Motorist Green-Book, the best known, listed Maine “tourist homes” in Augusta, Gardiner, and Bangor, plus one hotel and two tourist homes in Portland. The Sinclairs owned a copy. They probably used it in the off-season when they, too, traveled, sometimes on a cruise, but more often by car, staying at places like their own.

“Black communities were segregated because they were the only place African Americans could live, not because they chose to live together,” said Valerie Cunningham, founder of the Portsmouth (New Hampshire) Black Heritage Trail, which includes nearby Rock Rest. “Maids lived next to doctors, lawyers, and preachers. They knew each other from church and their kids went to the same schools. So when the doctor’s wife said she wanted to go to Maine, the maid next door said she knew a nice place where they could be safe and comfortable. She’d heard about it while summering up there with her employers.”

Clayton Sinclair grew up in South Carolina, then worked in New York as a chauffeur for a white family that summered in Maine. There he met Hazel Colbert, a Baltimore native, who earned her living as a ladies maid for a white family that summered in York. They married, made friends within the black community in nearby Portsmouth, New Hampshire, and decided to stay. When Clayton showed his bride the dilapidated two-room house he’d found on several acres in Kittery, she dismissed it as “a shack,” but he promised to fix it up. He did, and they moved in a year later, in 1940.

At the Portsmouth Naval Shipyard in Kittery, Clayton worked first as a laborer, then as a chauffeur, until he retired in 1967. Over the years, as the inn’s business grew, he expanded Rock Rest in his spare time, adding a second story, a front porch for card games and conversation, and a room in back where he and Hazel slept when they gave up their own room to guests. By 1948, he had replaced the old garage with a freestanding building that had guest rooms on the second floor with space below for two cars, and a shed nearby for a recreation room. An accomplished gardener, his flower beds are still remembered by Kittery neighbors. Hazel relied on the vegetables he grew for meals.

During the war, Hazel worked at the shipyard as a woodworker’s helper but left to develop her culinary skills. She soon became a caterer, which she continued in the off-season even after she realized she had the ingredients for a seasonal lodging business.

At the same time, both Sinclairs were active members of the community. She joined the League of Women Voters. He served on the Kittery Appeals Board. Together they helped found the Portsmouth branch of the National Association for the Advancement of Colored People (NAACP), and he served as treasurer. 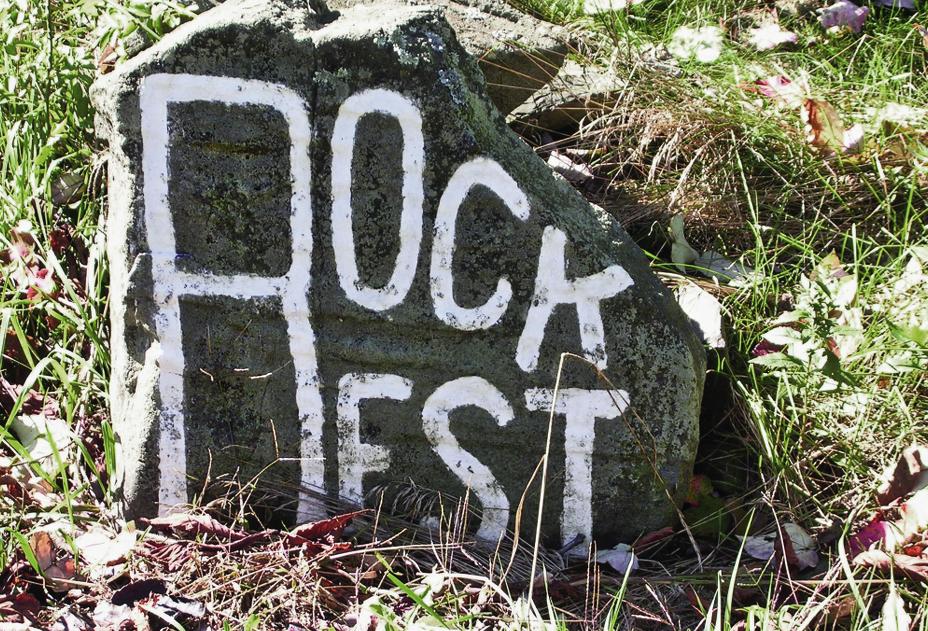 A pair of boulders marked the driveway of the guesthouse. One is still at the house, the other is now in the Smithsonian’s collection at the National Museum of African American History and Culture. Photograph courtesy of the Portsmouth Black Heritage Trail Thanks to the business records Hazel kept, we know that Rock Rest welcomed patrons from 28 states, chiefly Massachusetts, New Jersey, and New York, but also as widespread as Oklahoma, Washington, Wisconsin, and Florida. Generally they stayed for one or two weeks. In 1957, for $40 a week (the price rose to $85 by 1973) guests enjoyed a cozy room plus full breakfasts and dinners. Day trips were the usual seacoast pleasures—swimming, sightseeing, clambakes—and they attended the black People’s Baptist Church in Portsmouth. In 1948, Rock Rest registered 21 parties of one or more; six years later that doubled to 42.

A group of ladies from Boston came annually to spend a weekend in Maine. Other groups came for Sunday lobster dinners. Cunningham, who worked for the Sinclairs as a teenager, fondly remembers Hazel’s lobster thermidor, and, on Saturday mornings, codfish balls with grits. “There was always a bit of Southern cooking,” she said, “the kind that later became known as ‘soul food,’ like cornbread, but basically the menu was what you’d expect at any fine hotel.”

In 1977, the Sinclairs decided to stop accepting guests. “The Sinclairs were getting older and it made sense that they’d move towards retirement,” said the Smithsonian’s Pretzer. “But also the guest list declined. The same was true of other black-owned and -operated businesses, which suffered after passage of the Civil Rights bills of the 1960s, when public accommodations everywhere became open to African Americans. Their clientele now had other options. So there’s that irony—that what we think of as positive movement toward integration caused a decline in black business.” Clayton Sinclair died in 1978 and Hazel in 1995.

The Smithsonian recently acquired several dozen representative pieces of furniture from the house, thanks largely to the work of Richard Candee, president of the Portsmouth Historical Society and a Boston University professor emeritus in historic preservation. From the screened-in porch, the museum has decorative objects with seacoast themes. From the main house came paintings and other objects the Sinclairs brought back from the American southwest and other trips. Hazel, who was interested in regional cooking, collected cookbooks and kept a travel diary. There are even croquet sets, cribbage boards, baseball bats, and fishing poles.

Pretzer said the objects provide a full example of a tourist setting from the 1950s to 1960s and represent what middle-class African Americans wanted and could afford to buy.

Some 24 linear feet of documents—correspondence, photographs, guest registers, account books, receipts, and personal papers—had previously been donated to the University of New Hampshire’s Dimond Library where they are available to researchers.

“Rock Rest is really interesting in part because it’s not located on the beach or in a little tourist town,” architectural historian Christi Mitchell said. “It’s a farmhouse in the country and not where you’d think of tourists being attracted. They came because the Sinclairs were lovely people and it had nice grounds. It was homey.” 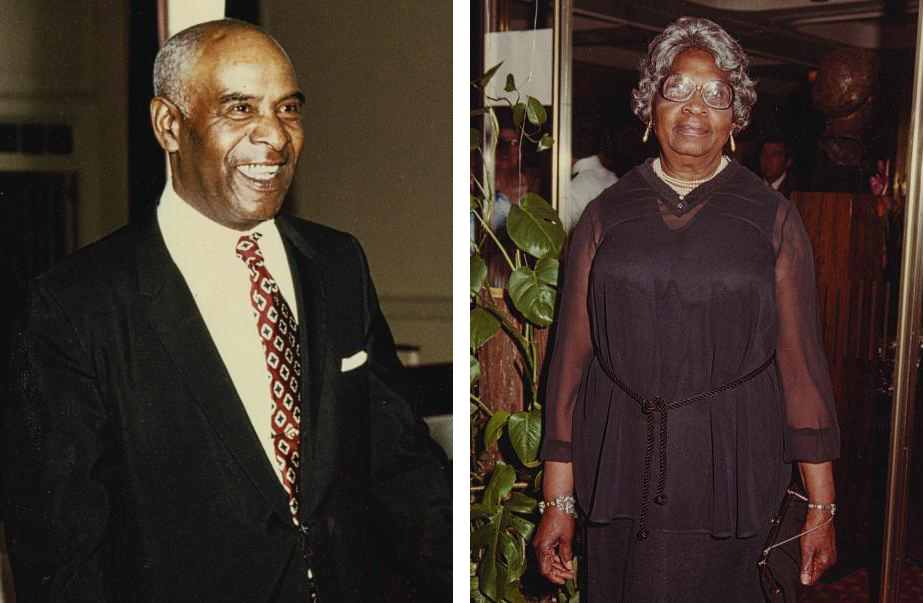 Clayton and Hazel Sinclair, c. 1971. Photographs courtesy of Milne Special Collections, University of New Hampshire Library Today, Rock Rest is owned by Kim Sylvester, a Kittery native, who bought it from the Sinclair’s son. Although it is her private home, she said she intends to honor its past.

When the Smithsonian’s new museum opens in 2015, Hazel Sinclair’s lobster platters and china, her sewing basket, a badminton set, and a boulder that used to mark the driveway on Route 103 will be part of an exhibition, “Defining Freedom, Defending Freedom: the Era of Segregation,” on how twentieth century African Americans created their own comfort zones.

“Rock Rest is a window into a very vibrant black community on the south coast of Maine, its culture and history,” said Pretzer. “These two people were very well respected. They were founders of the NAACP chapter in Portsmouth, not people who didn’t understand the disadvantages their race put them in. But they also fought for the black community politically and socially, and raised their son with awareness.”

The Smithsonian National Museum of African American History and Culture will open on the Mall in Washington, D.C., in 2015.
FMI: http://nmaahc.si.edu