A deep-V lesson I enjoy your magazine Maine Boats, Homes & Harbors, and consider myself fairly well read and traveled. I think however, that a minor improvement would be helpful to your readers in future issues. Specifically, the push to condense your articles is leaving out information that would be of great interest to readers. For example, the article in Issue #128 about the Lyman-Morse-built boat, Peregrine, referred to the deep-V hull with integral chines and lift strips. A sketch or picture of this would have significantly improved the article so the reader could fully understand this concept. The article about Freshwater Stone referred to large buildings and “wire cutting.” I have never seen this done and feel the article would have been significantly enhanced, as well as educational for your reader, if this had been shown and/or explained.
Alden E. Waterhouse
Pace, Florida
Editor’s note: Mr. Waterhouse makes a good point about the boat lingo. We asked Contributing Editor Art Paine to draw a diagram and explain the concept. Art offers the following lesson: 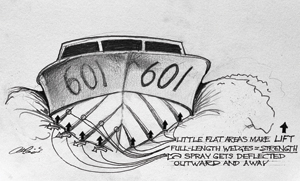