The largest and most advanced Navy destroyer ever built 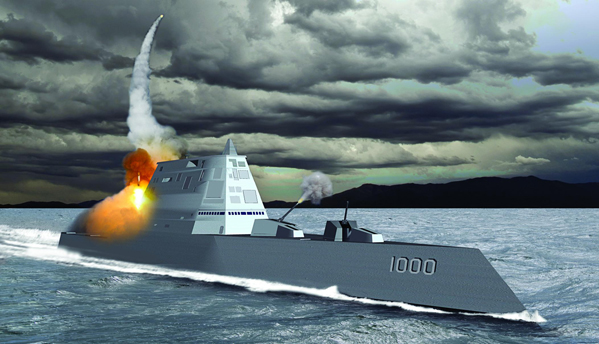 The Zumwalt looks strikingly different from other Navy destroyers. Many observers think it looks like a Civil War-era ironclad, but unlike the Merrimack or the Monitor, the Zumwalt carries a 155-millimeter gun capable of firing rocket-propelled, computer-guided projectiles. Photograph and illustration courtesy General Dynamics Bath Iron Works
By Phil Showell It used to be fairly easy to track how things were progressing at Bath Iron Works, the Maine shipyard where the Navy’s latest destroyers and guided-missile frigates are built. The giant cranes told you where to look while driving past. Over time, the unpainted reddish steel gradually took the familiar shape of a ship’s hull. Then came a launching and installation of the high-tech gear that made it a lethal warship. Dignitaries, bands, shipbuilders, and their families would show up for the christening. Months later a newspaper might report that sea trials were under way. However, when DDG-1000 slipped out of BIW’s dry-dock on October 28 and into the Kennebec River, even some who lived nearby may have been taken by surprise, and not just by its radical new design, nor by its close-to-$3.5 billion price tag. Although two football fields long (610 feet) and the biggest destroyer ever built at the shipyard, most of its construction took place out of the sight of curious passersby.
The design and technology reduce the radar signature of this massive destroyer to something the size of a fishing boat.
Since 2001, BIW has established a state-of-the-art modular system that involves constructing ships in three huge, separate buildings. The modules are then joined and partially completed in the yard’s dry-dock. That most of the work on this new destroyer took place behind enormous closed doors had nothing to do with the Navy’s designation of DDG-1000 as a “stealth” destroyer. That name is due to the tumblehome design with sides that slope inward up from the waterline, and the carbon-fiber composite superstructure, which houses nearly all the command and control equipment. That combination, along with other technology, reduces the radar signature of this massive stealth destroyer to something the size of a fishing boat. 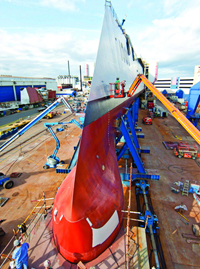 Unlike more conventional hull forms, the Zumwalt’s hull is fuller and wider at the waterline than above. The knife-edge bow, shown here, reduces the radar signature while the large bulb beneath it increases stability.
The ship’s extensive array of weaponry and its innovative power, detection, and fire-control systems make DDG-1000 the most advanced combat vessel afloat, according to naval technology blogs. Now at BIW’s Pier 4, the destroyer is easily seen from coastal U.S. Route 1. Bath Iron Works craftsmen will continue to work on the vessel this year. Sea trials, which are expected to calm any lingering doubts about stability in heavy going, will follow sometime in 2014. After a christening this spring (a ceremony scheduled for October was postponed due to the government shutdown), DDG-1000 will be known as the Zumwalt—named for U.S. Navy Adm. Elmo Zumwalt, chief of U.S. naval operations from 1970-1974. It isn’t expected to be turned over to the Navy formally until late 2014. The Navy had originally wanted seven stealth destroyers. Soaring costs have cut the list to three, all now in staggered stages of construction at BIW. Some of the yard’s 5,500 employees are working on two new DDG-51 Arleigh Burke destroyers, with contracts signed for four more.

The shallow-draft DDG-1000s were designed to go anywhere, providing firepower support for operations up to 63 miles inland, which is the range of the 155-millimeter guns that fire rocket-propelled, computer-guided projectiles. The 15,000-ton ships are equipped to operate alone, as part of carrier strike forces, or with smaller land- or sea-based units. Naval commanders are typically chosen based on their experience; so it is passing strange that Capt. James Kirk of Bethesda, Maryland, bearing the same name as the commander of Starship Enterprise (of Star Trek movie and television fame), won assignment as the first captain of the first stealth destroyer. Phil Showell is a retired writer and editor who spends the best half of each year in Phippsburg, Maine, the winter half in northern New Jersey.