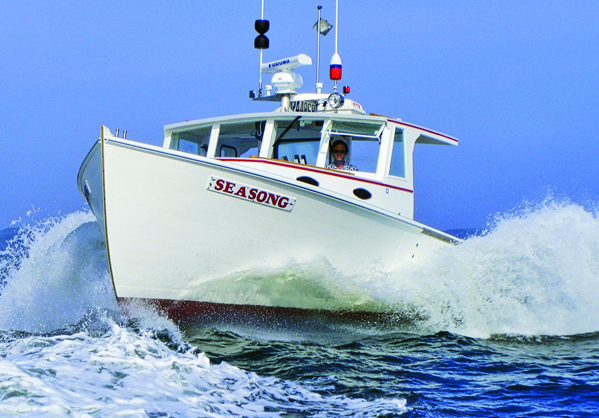 Seasong was the second boat Peter Buxton (below) built for lobsterman Frank Gotwals (shown at the helm). Seasong is built of native white cedar on white oak and bronze fastened. Photographs by Brian Robbins
By Brian Robbins When Stonington, Maine, lobsterman Frank Gotwals sat down with local boatbuilder Peter Buxton in 2012 to talk about a new wooden lobsterboat, he knew exactly what he wanted. They both did, actually. You see, Buxton had designed and built Gotwals the 36' Sea Hawk back in 2004. Though both of them were pleased with the way the wooden 36' x 12'10" model turned out, they both had compiled “what if” lists in the years since. 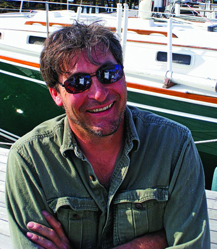 Peter Buxton
“My first boat from Peter was really comfortable,” said Gotwals. “I could always haul lobster gear in pretty much any weather I wanted to work in. At the same time, we had a number of discussions about what we might do differently if we ever built another one.” The stars lined up in 2012 when Gotwals’ stepson expressed interest in buying Sea Hawk, providing the impetus to turn “what if” into “let’s do it.” Boatbuilder Peter Buxton, a native of Stonington, grew up working on or around the water, and graduated from high school in 1980 with a passion for boats. This led him to enroll in the boatbuilding course at Eastport’s Washington County Vocational Technical Institute. Buxton went into business for himself in 1993, after gaining years of valuable experience working with Wade Dow at Bridges Point Boatyard in Brooklin, Maine. 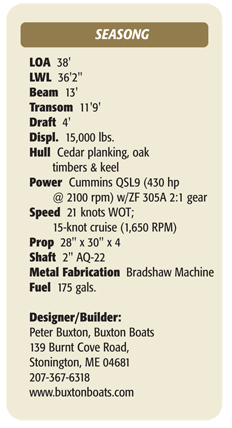 From the beginning Buxton Boats had enough work to keep busy, but it was mainly repair and finishing of fiberglass-hulled boats. Buxton’s heart lay elsewhere: he pined for wood. “I finally got to the point where I said I’d rather dig ditches for a living than keep on working in fiberglass,” he said. Sometimes you have to close a door before another can open. In the wake of his decision, Peter found some wooden boat repair work, and then along came the opportunity to design and build that first boat for Frank Gotwals. When the duo sat down to discuss the Sea Hawk’s replacement in 2012, they were both on the same page, said Gotwals. “The goal was a slightly bigger boat with a little less horsepower. Peter felt his design would still have a good cruise speed while burning less fuel.” The result was the 38' x 13' Seasong, which meets—and beats—the expectations of Buxton and Gotwals, both performance-wise and as a sea boat. “Seasong has a little sharper entry on the waterline and a little deeper forefoot than Frank’s first boat, allowing her to hold up into the wind well,” said Buxton. “Overall, her run is designed so that she sails a little higher in the bow. Back aft, she’s wide-bilged: in a side-to chop she’ll just roll down once and stop.” Seasong is bigger than his old boat, but just as maneuverable, said Gotwals. “Plus, I really like the way she sails. I’d say we did it.” Peter Buxton felt the same way. “As good as the first boat turned out,” he said, “I probably started a list on launch day of what I’d do differently. This time I can honestly say I wouldn’t change a thing.” Brian Robbins writes about music and boats for a variety of publications, including National Fisherman and Commercial Fisheries News. He plays the guitar in a band called the Horseshoe Crabs.