The things cormorants do Cormorants. Ah, yes (MBH&H, Winter 2014). They are a constant summer presence. There’s been one of them visiting in mid-September, past couple of years, that uses the bow of my 16' 1960s Whaler as a first-class fish-spotting platform, and first-class outhouse. Daily deposits. So bird-lover though I am, I decided that this year it was time to purchase one of those fearsome, lifesize, plastic great-horned owls with realistic glass eyeballs to scare off the outhouser. I set it up, right there in the bow. Fearsome. Next morning, right next to the owl, yeah, another white, mushy deposit. I moved the beast around daily, as per instructions, to make it seem more alive. Next day, another deposit. I moved the critter onto the dock, right next to the boat. Next morning, I saw two cormorants sit side by side and dump. Perhaps it’s divine retribution for my own occasionally anal behavior?
Herb Parsons
Vinalhaven/North Haven, Maine 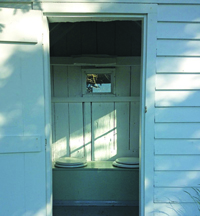