Coming of Age All Over Again

Young craftsmen and farmers take a page from 1970s hippie culture to shape a sustainable way of life along the coast.

I was talking to a friend about life on the Blue Hill Peninsula the other day. It is a regular activity in these parts because the face-to-face nature of the place makes us feel that we have a stake in what goes on.

The scene was the new farmers’ market held on Saturdays in a spacious, high-roofed greenhouse at our local garden center. At the market, two stands featured fresh vegetables grown at farms that came into being in the back-to-the-land movement of the early 1970s. One of the farms, Horsepower Farm, chose (as the name suggests) to look back to the way things were done a century earlier. The other, Four Seasons Farm, is known for Eliot Coleman and Barbara Damrosch’s pioneering work in growing green vegetables all winter long. The fruits of their efforts, written out in bins of root vegetables fresh from the cold cellars at Horsepower and in the leafy ebullience of fresh spinach and arugula from Four Seasons, demonstrate a hard-won skillfulness on the part of many hands over many years. Those of us who witnessed the original establishment of these neighboring farms are heartened by their resilience over many decades.

These two survivors not withstanding, most of the businesses under the soaring glass ceiling were newcomers: a coffee roaster whose cheerful obsession with the minutest elements of a proper brew draws customers from miles around; an organic pig farmer with a custom line of delectable sausage; a goat herder with specialty cheeses; a wood-fired bakery specializing in ancient grains; and a Japanese woman with “museum quality” miso soups.

John Ellsworth of Carding Brook Farm in Brooklin favors horses for fall harrowing, as they are lighter than internal combustion-powered machinery and gentler on the clay-heavy soils of his saltwater farm. Photo by Michael Weymouth

These days there is more folding money along the coast than there was in the 1970s, and this fact—along with the luxuriously caffeinated state of the shoppers at the market—provided commercial zip to the lively winter scene. Another element seemed present as well. Long gone is the blend of political and familial rebellion and simmering anger that added a frisson to life in the 1970s. Also long gone is the earlier generation’s deeply rooted suspicion of capitalism. In its place, among the stalls and counters of the young farmers and craftspeople, one can even spy the glint of high-function business acumen.

Not only are the new entrepreneurs riding the twin waves of “buy local” and “eat organic,” they have launched a couple of programs to promote their wares and celebrate the life they share in rural Maine. The first of these is an event called PechaKucha, a Japanese phrase that means chit-chat, in which each presenter shows and discusses 20 images in a time span of 20 seconds each.

First launched in Tokyo in 2003, there are now nearly a dozen PechaKuchas presented around Maine on a regular basis. The reasons for their success are easy to grasp; the shows are simple to stage, and equally simple to organize. People bring beer and snacks to share and Grange Halls and similar community spaces are available and cheap to rent pretty much anywhere. Finally, each presentation’s mandated brevity makes it palatable to diverse audiences who might be less willing to give over an entire evening to an aromatherapist with unlimited time to share. In former times if you were a graphic artist or furniture refinisher or pig farmer, or just someone with an eccentric preoccupation, and you wanted to get the word out on your work, you were pretty much on your own. At a PechaKucha gathering, a crowd of a 100 or more curious well-wishers and potential customers can be wrangled together to check out your scene.

Another way to promote artists is the 8X10 Show held in Blue Hill each year before Christmas. Once again, simplicity reigns. An invited group of eight artists shows 10 pieces of work that measure 8 inches by 10, each priced at $150. Big crowds show up early and the work generally sells out before the snacks are gone at noon. On the aforementioned morning when I was discussing life in Maine with my friend, the 8X10 Show was holding forth across the street from the market. From one (free) parking space a patron could see fresh and affordable art, enjoy a matchless latte, stock up on greens and raw milk Parmesan cheese, and be home by noon.

Forty years ago the dream that brought so many of us to Maine was self-sufficiency. These days self-sufficiency is still part of the deal, but actually showing a profit from one’s labors has crept into the picture as well. Accordingly, some think the new farmers and artists lack nobility, that they are just looking out for themselves and lack a higher social purpose.

But as my friend and I were discussing at the market, Maine is no easy place to make a living. In the 1970s, rank after rank of back-to-the-land revolutionaries were scythed down by the sharp blade of economic reality. Some early recruits went back to the suburbs from whence they had come. Some gave up growing broccoli or trying to get tomatoes to actually ripen before the first frost and took full-time jobs as carpenters or shipwrights. Others stuck around by taking up the white-collar careers for which, by family circumstance, they were predestined. Others—and these became noteworthy to native Mainers observing the scene—fell back on trust funds provided to them by less ambivalent capitalist forbears.

It was all such a glorious mishmash back then. You had a generation of newcomers settling down on rocky, alder-choked farms that hadn’t really worked very well as farms back when there were actual farmers. There was the agony of Vietnam rippling through so many lives; the Women’s Movement and its unsettling promise of gender equity; the rickety scaffold of dreams illustrated so elaborately in the pages of The Whole Earth Catalog; the lure of an owner-built house on a 100-dollars-per-acre farm; Scott and Helen Nearing preaching “Living the Good Life” and then actually doing it right there in Brooksville; the giddy mythology of do-it-yourself VW repair; and, above all this ruckus, the overarching proposition that a man and a woman could sculpt a life based solely on their individual efforts.

No corporate life sentence spent bolted to the floor of some cubicle. No gray flannel nostrums handed down from generations on high. No golf. Just the roll of seasons, ebb tide and flood tide, firewood split and firewood burned. Of course Maine was beautiful beyond any easy reckoning: a beauty that seeped through woodlot days and star-drenched nights to dominate our dreams. A simple drive to Deer Isle for chainsaw maintenance became a visual feast. From the progression of colonial houses and barns along the Reach Road, with stone walls winding through fields and birch groves, to gulls tightly clustered on a ledge just off the causeway, each of these vistas flung with easy abandon into the morning air, clarifying the mind of even the most do-it-yourself-addled homesteader and his carburetor problems.

Beyond the beauty was the comforting pull toward utilitarian specificity. In Maine back then we knew how deep our neighbors’ wells were and how many gallons of water they produced. We knew which ones were drilled in the modern rotary way and which had been pounded out with old-fashioned cable rigs. We learned to cut pulpwood for the paper mill in Bucksport, how to shuck scallops, and how to caulk a seam in a $25 skiff.

Hazards like condensation, cutworms, cellar drain back-up, and creosote build-up were endlessly chewed over by men, while women discussed when to plant peas, designs for root cellars and cold frames, and how to put up mackerel in glass jars. All of this analysis and sharing of skills served as a portal to adulthood and ultimately toward mastery in the arts of country living. I will never forget sitting in kitchens warmed by ancient cast-iron cook stoves soaking-up cast-iron survival skills from old timers who had come of age in the Great Depression—yet didn’t really notice anything different—because lean times had always been the norm in Maine.

Gradually the beauty and the struggles of the day-to-day honed competence in those that stayed to fight for their farms and for their families. Gradually communities formed around schools and music and, surprisingly, Little League. Gradually, very gradually, some new hybrid form of living and making a living was forged. 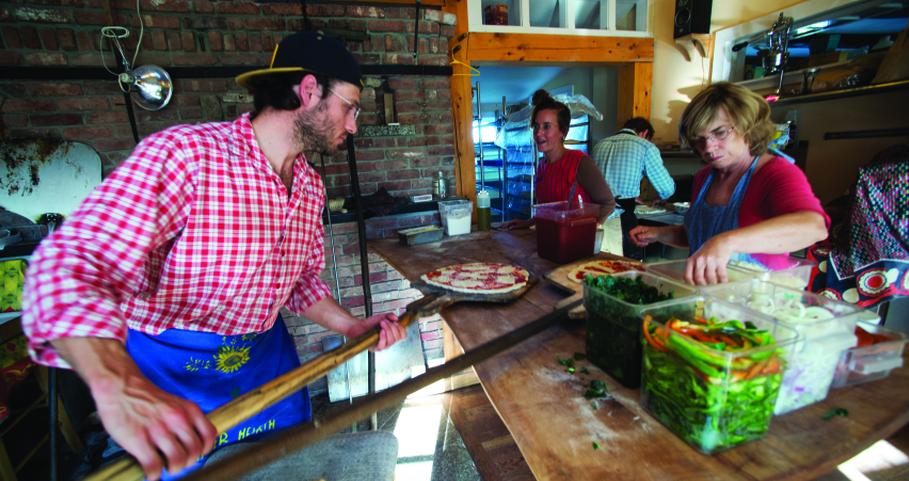 Now a second generation of farmers and artists and boatbuilders and yoga teachers and writers has come of age with new focus and energy and originality to ride bigger and more prosperous waves into the future: a little wood-fired pizza here, some wood-fired loaves of bread there. We have boutique beer, artisanal cheese, farm-raised oysters and mussels, custom-crafted chocolate, and hand-roasted coffee brought to perfection by machines that cost as much as a house and land had back in the day.

Both the generation of the 1970s and the generation of today have tapped into the deep running energy that flows like electrical current through the bedrock of coastal Maine. To succeed here you have to push through by simply not noticing a lot of bad weather, delayed UPS deliveries, blackflies, mud, slow broadband connections, the frantic pace of high summer when it appears the whole world intends to stop by for a chat, and roads so lousy in the spring ice-out that a seven-mile journey, if you add in the frost heaves, becomes something close to eight.

We have something here that can’t quite be measured, but we keep right on measuring it anyway as time spools on, pulling us through each day, quickly enough to get where we are going, slowly enough to make us notice.

Bill Mayher lives in Brooklin, Maine, and is one of the founders of the maritime web site, offcenterharbor.com. His book, Maine: Coming of Age, with photographs by Michael Weymouth, is due out in the summer of 2014.