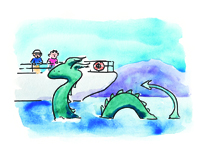 All illustrations by Ted Walsh
One of our porch regulars was once an underwriter for a major insurer. He worked with the actuaries, who are probability analysts; they run computer models to predict risk but don’t have the social skills to be accountants. I wonder if this risk was run through the actuarial department; if it was, those guys will be talking about it for years. It’s Alive! Time for another Mel Brooks movie, perhaps this time about genetically modified Atlantic salmon, often referred to as Frankenfish. Developed by a company named AquaBounty, the trademarked AquaAdvantage salmon has had a gene from a Chinook salmon spliced into it. This gene acts like the override switch on a light timer. Evidently the growth hormone in Atlantic salmon that tells the fish “time to bulk up” is only in the “on” position for part of the year. The Chinook gene throws the switch into the “on” position all year round. The pictures of AquaAdvantage salmon online are impressive. While an 18-month-old fish without the gene weighs about three pounds, Frank weighs over six, and he got to that weight with a lot less feed. More pounds of salmon at a lower cost, deemed safe by the infallible FDA. What could be wrong with that? Nothing at all, according to AquaBounty (aquabounty.com), or a lot, according to the anti-genetically-modified-food guardians. Here in Maine, according to an article in the Ellsworth American, farming GM salmon has been illegal for years, and a state representative has introduced legislation to require any GM salmon sold in Maine to be marked with a special label. If that passes, I hope the label bears a likeness of Peter Boyle’s character in Mel Brooks’s Young Frankenstein. It turns out that a lot of practices in aquaculture that are designed to modify qualities such as growth rate or disease resistance, fall outside the GM definition. The bill in question is being re-written to make the definition of “genetically modified” less broad, so as not to sweep up in its regulatory net other farmed organisms, such as oysters. I hope my reading of the science is close enough; I am sure my limited understanding of biology is sticking out all over the place. Would that science rules the day, and a less-expensive source of high-quality protein is not outlawed for the wrong reasons. We can’t all afford to shop at Whole Foods. We Jammin’ The High Season on the coast is bookended by two festivals that bring most of the schooner fleet together: Boothbay Harbor Windjammer Days in late June, and the Camden Windjammer Festival over Labor Day weekend. As I write this Boothbay is a couple of weeks away; as you read it, Camden is still to come. These events are Maine’s mini-OpSails; a chance to imagine the New England coast in the days of sail. There is a photo in our cottage in Boothbay of an unidentified New England harbor with dozens of schooners at anchor or getting under way. They were the 18-wheelers of their day, the towns and cities of New England were their terminals, truck stops, and repair shops. 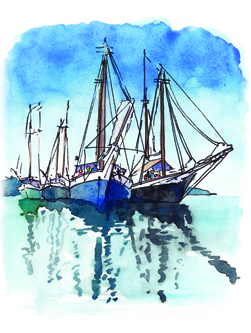 All illustrations by Ted Walsh
Reading the schedule for the Camden event reminded me that things are happening all over the state all summer long. I found a fairly comprehensive compilation of events on line at visitmaine.com, although there are some events I know of that are not listed. I think it would be possible this year to attend festivals 4 or 5 days a week through the entire summer and do it again next year without having to repeat. Perhaps this magazine should rent a big RV and go to as many festivals as possible and write about the quest. Top choice? I would cast a vote for the Wilton Blueberry Festival in early August. (www.wiltonbbf.com). Check it out. Back to Camden and the age of sail. There’ll be plenty to see, eat, buy, do, and hear. Get one last sunburn and a few thousand extra calories. More information at camdenwindjammerfestival.org. Climate Change is Good Climate change is affecting many aspects of our lives and has the potential to shift patterns of commerce in the years ahead. Maine could very well benefit from the latter. For instance, we have talked a couple of times about the Northwest Passage and how increasingly common high-latitude transits have become for vessels of all kinds. Now some visionaries are looking in the other direction. Thanks to the shrinking ice pack, it seems that the Northeast Passage, through the Arctic Ocean across the top of Russia to Asia, is now a viable trade route. It is 40 percent shorter than sailing through the Mediterranean and the Suez Canal, plus there are no Somali pirates. In a Bangor Daily News article about a trade mission to Portland by Iceland’s President, Olafur Grissom, the writer noted that the northeast route is already being used by commercial vessels. President Grissom, in an address to Maine’s trade community, said Maine and Iceland are in a position to benefit from this new route. In fact Eimskip, an Icelandic shipping company, has recently relocated its North American headquarters to Portland from Norfolk, Virginia, and is now providing direct container service between Northern Europe and Maine. Portland was chosen thanks to infrastructure improvements at the Portland terminal. The challenge for Maine will be to continue to make infrastructure improvements in the future, so it can function as a major port of entry in a decade. The visionary chat by President Grissom may plant the seeds for something positive to come from the shrinking Arctic ice pack. Just because we see—and bemoan—the effects of global warming does not mean we should dismiss the opportunities it presents. That’s all for rambles and rants from the porch. Now we need to get back to the real mission of the porch regulars: monitoring boat traffic for nautical irregularities. Things are a little quiet as I write, but by the time this is in your hands I can imagine the fun we will be having. Speaking of fun, it’s time for the part you’ve been eagerly awaiting: Now the weather’s finally warm When you make your favorite dish That requires a larger fish Don’t forget to praise the life Of smelt, of herring, and alewife. Maine in spring and early summer We know the salmon ate the smelt Whose total numbers have been dealt A blow that the salmon feel Like stripers with the shrinking eels. Just because I wax poetic Cod we know are omnivores Could it be they came near shore To feast upon the steady flow Of alewives off to sea to grow? Just because I wax poetic The Arctic ice may further shrink Don’t despair, but rather think Of opportunities here already Feet up, binoculars at the ready.