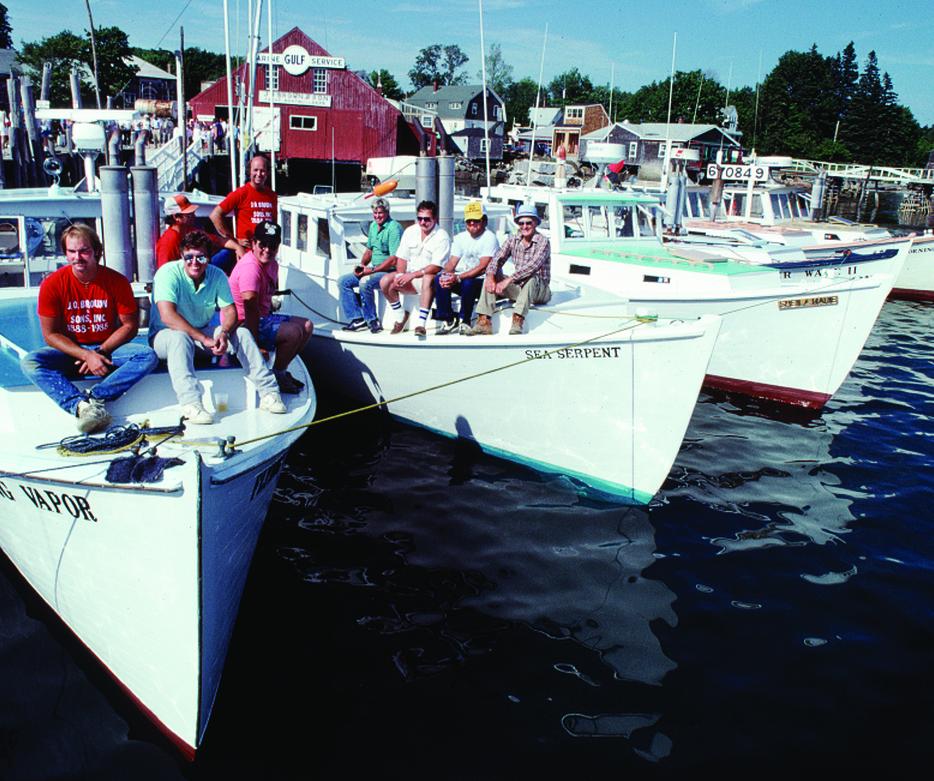 Painted white with an orange boot top and the name “Pete” carefully outlined on its rounded stern, the latest boat built in the shop at the J.O. Brown & Son yard on North Haven island measures only about 12 inches on the waterline. But Foy
W. Brown is as proud of it as he has been of any of the yard’s previous projects, including fine yachts and fishing boats. That’s because Pete was built by Foy’s five-year-old grandson, Cyrus. If Cyrus chooses to continue in the profession he will be the sixth generation of his family to build boats in this island-based yard.

“We are teaching him. He comes down with his father all the time,” said Foy W., proudly holding up another one of Cyrus’s model boats, this one painted red. “If Cyrus grows up and wants to do this” he adds, waving his hand around the shop floor, “then it will be here for him.”

Housed in several buildings that are sprawled haphazardly over an acre or so of land alongside the Fox Island Thorofare, near the ferry landing in downtown North Haven, the yard is a physical and spiritual landmark both for locals and passing boaters, and no wonder. This summer will be its 125th year as a family-run business. Few other boatbuilders  can boast such continuity.

The secret to the North Haven yard’s success has been the Brown family’s ability to change with the times and to keep family members engaged. That’s no mean feat in a community as small as North Haven, located a dozen miles off the coast of Rockland. The island’s population fluctuates between 300 in the winter to 1,000 with the arrival of summer residents, many of whom have ties to the island that go back to the 1890s.

J.O. Brown & Son began by building elegant yachts for summer people, then added commercial fishermen to the mix of clients as well as service yard work. Today, two generations of Browns maintain docks and moorings, and store and care for over 150 boats, in addition to selling fuel (for boats, houses, and cars), lobsters, and an assortment of hardware items, ranging from lobster buoy lamps to flashlights, tools, and light bulbs.

The only son of a North Haven fisherman who died while mackerel seining off Prince Edward Island, the first J.O., (James Osman) Brown worked in a shipyard in Camden before returning to the island. According to family lore, he also worked for one day in a Vinalhaven granite quarry and hated it. He began J.O. Brown (the business) in 1888 in an old fish house near the current boat shop when a wealthy summer visitor, Dr. Charles Weld, commissioned several North Haven dinghies. Brown eventually built more than 70 of the 14-foot catboats, which are still raced by summer residents today and are considered the country’s oldest one-design racing fleet.

J.O. built several more boats in the original shed before it burned in 1895, according to a 1941 account written by his daughter, Vonie. He moved the operation into another waterfront building, which the yard still uses for storage. Then in 1898 when the town’s lobster cannery closed, he partnered with Weld to move the business there.

Perched on granite pilings over the water, the large red-frame building was built like a ship, with huge hackmatack hanging knees bracing the rafters. Weld and Brown modified the rafter beams to accommodate taller boats and installed a floor that drops down to allow vessels to be launched directly into the water. Photos taken over the years show that the shop has changed little.

Brown handed the business down to his son Foy, and “Son” was added to the business’s name in 1927. Then, in 1940, came Foy’s son, James E., who was the father of Foy W. (sometimes called “Big” Foy) and his brother James O., both of whom now work at the yard.

James E. lived in the house his grandfather built next to the yard and was a fixture in the shop until he died in December 2008 at the age of 91. Fittingly, his body lay in boatyard state in the unheated shop for a day until it could be taken off-island to a funeral home on the  mainland.

Foy W.’s son Foy E. (sometimes known as “Little” Foy) joined the crew in the 1990s. Cyrus the budding boatbuilder is his son. 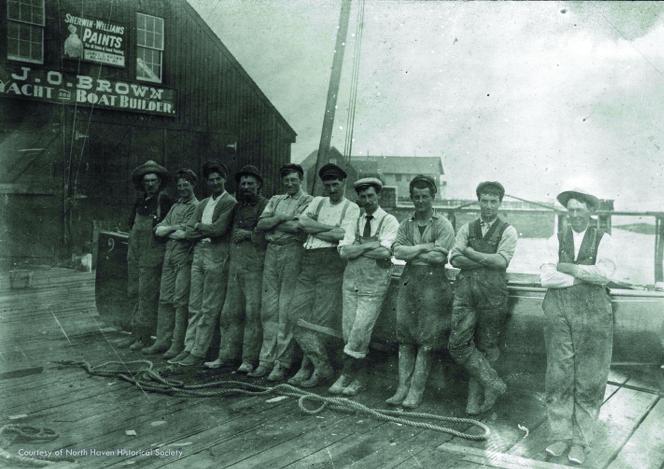 The crew circa 1922, James Osman Brown, third from the left. Courtesy the North Haven Society and gaff-rigged market boats. By 1901, according to Vonie Brown, 16 people worked in the yard. In the early 1900s, the company branched into building motorized dories and larger launches and then, in the 1950s and 1960s, into the construction of sturdy, commercial fishing boats. Vonie compiled a list of all the boats built there, and the family has added to it. The total comes to well over 100.

Foy W., now 66, started building boats full time as soon as he graduated from high school. Back then, in the early 1960s, the yard was busy, building three wooden North Haven dinghies a year for three years, as well as a handful of motorized launches. “I didn’t think there was anything else in the world to do,” he said. “I know now that there is, but I’m too old to change.”

Foy W. has built nine lobsterboats over the years, including three for himself. A 2007 project involved recreating the yard’s workboat, the Kim-Lin, as a pleasure launch for a summer resident. While in recent years much of the yard’s work has been on fiberglass boats, finishing off hulls or repairing them, he’d rather work in wood. “Wooden boats have a soul,” Foy said. “When you build somebody a wooden boat, no matter where they take it, it’s still your boat. You put your heart and soul into it.”

Last winter he put a new keel on an old wooden Herreshoff 121⁄2-footer. His voice intensified as he described taking the hull apart, and figuring out how it had been built and how he could improve it. “I’ve been wanting to do that for a long time,” he said.

The winter can be long without a major boatbuilding project, so Foy also fishes for lobsters and, in his spare time, tinkers on various projects. He has built tugboat models, a hydroplane (unfinished), and a rustic houseboat, where he and his wife Louisa stay during the summer. A general Jack-of-all trades, Foy often is called upon by island residents when they don’t know where else to go to get something fixed. “I try to do as good a job as I can and not waste people’s money,” he said.

While the men have kept the large red-frame shed humming with boat work, women in the family have run the back office, as well as helped with boat projects. The founding Brown’s great-granddaughter Kim Alexander, 56, maintains the books. She inherited the job from her aunt, Ivaloo Brown Patrick, who in turn inherited it from her aunt, Vonie Brown.

A black sign with painted gold lettering reading “Miss V.E. Brown, public stenographer” still hangs over a cluttered antique standup desk in a back room near a propeller price list from 1948, a Farmers Almanac from 1955 hanging on a string, and a wall calender from 1973.

This is not a family that throws anything out easily. A lot of artifacts remain in the shop and around the yard. After all, you never know when something might come in handy, according to the founder’s great-grandson and namesake, James Osman Brown, 68. He went off island to serve in the Navy in the 1960s and thought about becoming an airplane pilot, but came back to the yard instead. He is one of seven family members in the yard’s nine-person crew.

A long workbench along one wall holds old tools (many dust-covered), two old transistor radios, an empty tin for Buckingham Cut Plug Smoking Tobacco, a rotary dial telephone, old bronze propellers, saw blades, a stack of box compasses, cans of paint and epoxy, several old Shop-Vac filters and an array of newer items, such as a plastic Craftsman tool box. Interspersed with new electric drills and bits of wood are old cleats, bolts, wooden and bronze blocks of all sizes, and even a plush, stuffed Teddy bear. Rusty thumbtacks hold up snapshots of boats, men, fish, and dogs, some so stained and faded they are barely visible. Metal and wooden spars hang from the rafters, as do the pulleys and cogs of an old steam engine that once ran the shop equipment.

Hanging from one beam is a green wooden wheelbarrow that belonged to the first James O. and that has been used by each generation of children ever since. “It’s amazing that we get to use the same toys and tools and things that our great-grandfather did,” said Kim Alexander.

Her son Adam, 30, who has been working with her to update the privately held company’s management and record keeping, says not everything in the shop is as precious as the wheelbarrow. He has set out to remove some of the clutter and modernize the yard operation. “We would be called hoarders, if we didn’t have so much property,” he said with a smile.

Other modernizing projects include the construction of a new pier alongside the shop. The company received a grant from the state’s Working Waterfront Access Protection Program to replace the old wharf with a wider and longer structure and Prock Marine will begin work on it this fall. Adam and his cousin Rachel (James’s daughter; two of his sons have also worked for J.O. Brown) also would like to restore a nearby wharf for a marina. Part of that wharf housed a family-run restaurant for 24 years before it closed last year.

Other family members working for the company include Linda Crockett, whose mother was James E.’s sister, Ivaloo. Linda, who works in the store, has been around the yard all her life. “I’ve never been anywhere else,” she said. Then she added a sentiment shared by many of her relatives: “It’s where I’ve always wanted to be.”

And that’s a lucky thing for North Haven.

Polly Saltonstall is Editor In Chief of this magazine, and does a lot of her sailing in the Fox Islands Thorofare.