By Rob McCall
When the sun rises to its highest point in the sky and shines fully on us, we are truly re-created, we become new beings. Rob McCall has taken several weeks off this summer and repaired to what he somewhat grandly calls the Awanadjo Almanack Cobscook Field Station, a one-room, log-frame camp on the farthest reaches of the Washington County coast. While he’s away we offer these excerpts from his latest book, Great Speckled Bird, published by the Pushcart Press in 2012. —The Editors At Camp 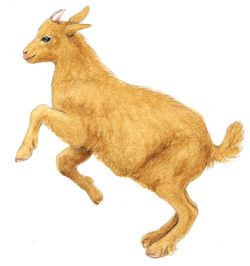 Illustrations by Candice Hutchison
Thirty years ago when we built our camp on Cobscook Bay in Washington County, the easternmost in Maine, it seemed like wilderness, and really it was. People got lost in the woods there in those days. We made a small clearing and framed the cabin with the trees we cut down. The woods were close on every side, but over time we gradually cleared them away, and the woods seemed less wild. One day, not a hundred feet from our cabin, we discovered a huge boulder left by the glacier, settled comfortably into the ground, draped with brilliant green moss on its north side, its top littered with the fallen needles of spruce and fir. For a long time we had not even known it was there. Its discovery was a revelation: A mighty rock within a weary land. Our delight was great with this touchstone, this anchor on the changing land. It was older than anything else we saw under the sky. Now we watch it from the cabin. We go out to sit upon it and feel its comforting inertia, its patience, its peace. We called it “Tunkashila” which is a Lakota word meaning “grandfather rock” or simply “God.” Sometimes I imagine all the changes this grandfather rock has seen since the glaciers left it sitting 12,000 years ago on cold, bare bedrock scraped clean by the ice. Back then, the little brook next to the boulder ran with milky ice-melt, and the winds from the north blew bitter cold over the retreating glaciers. After a time, I imagine, lichens and mosses took hold on the surrounding bedrock, their decaying bodies building a thin topsoil to support the seeds of spruce, fir, and birch dropped by squirrels and jays as they slowly spread the forests northward from sub-glacial climes in what is now Massachusetts. For thousands of years the first Americans hunted in the woods, and fished and clammed along the shores of Cobscook Bay, maybe camping by our boulder, using it as a landmark, a sitting place, and a windbreak for their fires, while spruce and fir sprouted, grew great, and fell to enrich the soil for their offspring. All the while, our boulder sat motionless as thousands of generations of mosses flourished and died upon it, thousands of generations of red squirrels shucked fir cones on it, and thousands of generations of ravens croaked and strutted and picked at the leavings, while the eagles soared above and the loons and seals called from the bay. When the whites came—in this case the Irish some 240 years ago—they cleared the forests and ranged sheep, goats, and cattle over the land. I imagine a big Galloway bull scraping off his winter coat, or a goat scampering up on our boulder bathed in sun. After World War I, the farm was abandoned, and the fields grew up to woods again, wrapping our silent, abiding boulder in the cool dark of the forest for another 75 years, until the day we began cutting trees for our cabin and the sun shone upon it again, as it does today. “Change and decay in everything I see,” sings the old hymn, “O Thou who changes not, abide with me.” At our camp, as we like to say, “the power never goes out.” That is because there is no electricity; also no phone or running water, and no road to the cabin door. Everything is carried in, or is there already. The power, however, is plentifully provided by the meeting of earth, air, fire, and water, and by the enveloping silence. Fog and showers keep everything damp, but we manage to get a good lot of our work done. Fire does its work, too, as the woodstove dries our soggy things and the kerosene lights illuminate our reading at night. The profound silence sets your ears whispering for a day or so until it sinks in. You can hear the mandibles of a bald-faced hornet gathering wood fibers from the shingles. You can almost hear the slugs singing. For about 25 years I mowed a couple of acres by hand with scythe and grass-whip. When I turned 60, I ruefully but gratefully accepted the gift of a roaring old power mower with big wheels that does the job in a third of the time. I try to hit the rocks at just the right angle, so that instead of dulling the blade, they sharpen it. It occurred to me that the American obsession with mowing is a way of clinging to the last vestiges of agriculture in an urbanized society. Just the way a sheep dog will herd chickens or cats or children if it has no sheep to herd, we zealously mow the grass as though we were making food for someone, even though we’re making nothing but noise and smoke. 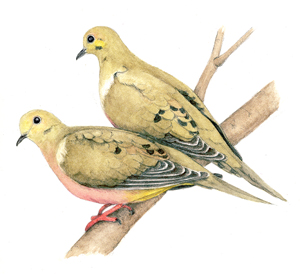