Catching squid is supposed to be easy 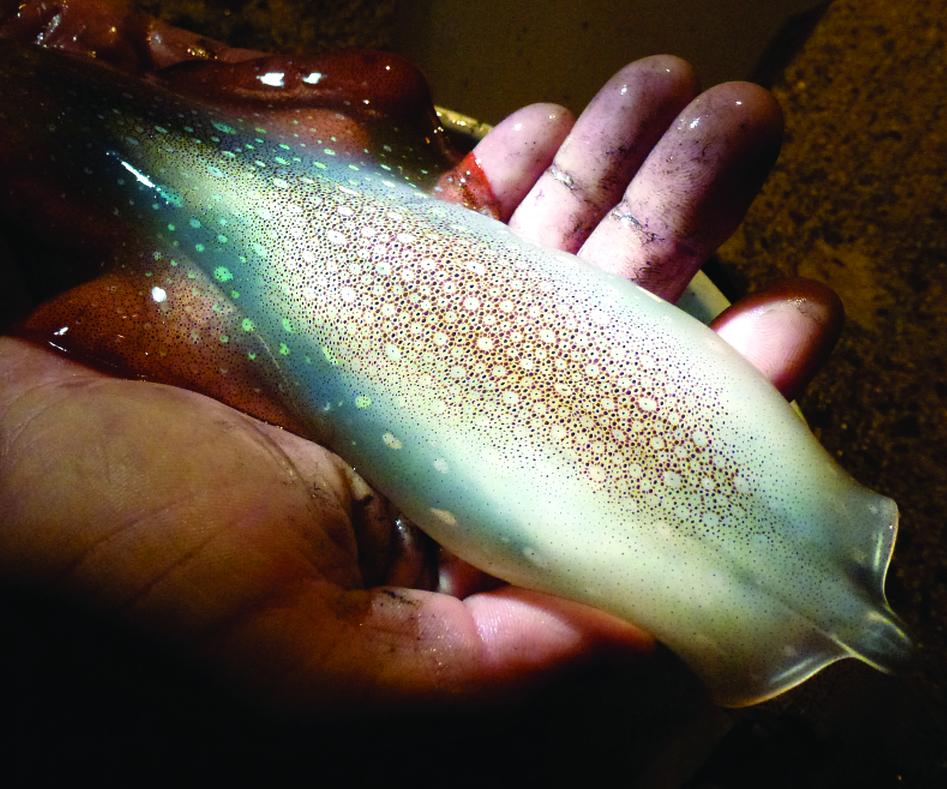 Pale and luminous, the squid drift in a group toward our lures, hover, then scatter. Their movement is smooth, so different from fish, which swim with tail flicks and fins. Instead, squid slide. They propel themselves by sucking water in and then forcing it out of their body cavity. Their path is straight and direct, not curving and swaying.

As I stand on the pier watching them in the bright lights that shine on the water, I feel a silence that seems deeper, larger, and more palpable than that of the mackerel that swim nearby.

Catching squid is supposedly easy, but on this night we are not getting any. The lures we bought are long and heavy, and when we shine our flashlights on them they cast a soft luminous green glow, not unlike the squid itself. The squid approach the lures and check them out, but they are not fooled. We are so fascinated to see these tentacled creatures stealthily pulsing through the water, always in a pack, that we do not care.

We have brought a picnic to the Seal Harbor pier: bread and olive oil, sliced cucumbers, molten goat cheese, and warm, sweet tomatoes from the garden sprinkled with our own sea salt. It is a family outing. The kids fish for squid, eat supper, chase each other; we—the adults—fish for squid, eat, and plan the next expedition.

A week later we try again, this time going to Northeast Harbor. We are surprised to see the dock filled with people, and then astounded at the number of milky squid sliding back and forth in the water below. One young boy pulls a spinning squid from the water and through the air. His dad gently strokes it, unhooks it, and then adds it to a bucket.

We have just encountered Sydney, perhaps 13 years old, a squid whisperer for sure. One family is leaving; they say they caught two squid, but that Sydney (they call him “Squidney”) pulled them in as quickly as he could throw his lure into the water.

We toss out our lures, and again the squid scatter. Sydney casts his small blue lure and draws it through the water. He snags a squid—the tentacles spin, spraying water—and he pulls it up and through the air. Again, his dad unhooks the squid; this time he shows us the speckled pattern on the squid’s skin. He remarks that some have a deep red color, while others are pale. As he holds it the color changes. The squid is dying, but is held with reverence. It does not seem a cruel passage.

Sidney is happy to share his skills, and shows us his lure, which is much lighter than ours. I toss mine in, and Sydney gives advice on jigging and how to create movement that will attract the squid. Then he tosses his lure back in; 30 seconds later he pulls up another squid.

Young Sydney is unknowingly modest. He believes that I, too, could catch buckets of squid if I had the same lure he uses. I am skeptical. I will order one, but I think that it is more than the lure, that Sydney’s success comes from skill and dexterity.

His dad agrees. He generously tells us where to get the lure, and then says, “We were both fishing, but Sydney kept catching them, not me, so I just help him.”

It is a lovely father-son partnership. They share a respect and love for squid. Sydney sees a baby squid, and begs his dad to let him catch it and keep it in an aquarium so he can study it. But they do not have an aquarium, so the baby squid is left alone. They tell us about squid habits, that they are smart.

“After a while in one spot,” Sydney says, “the squid tell each other to stay away from our lure, it is taking their brothers away.” I believe him. He tells me how they have one style of swimming when they are content, and another when they are looking for food. He has observed them and paid attention. 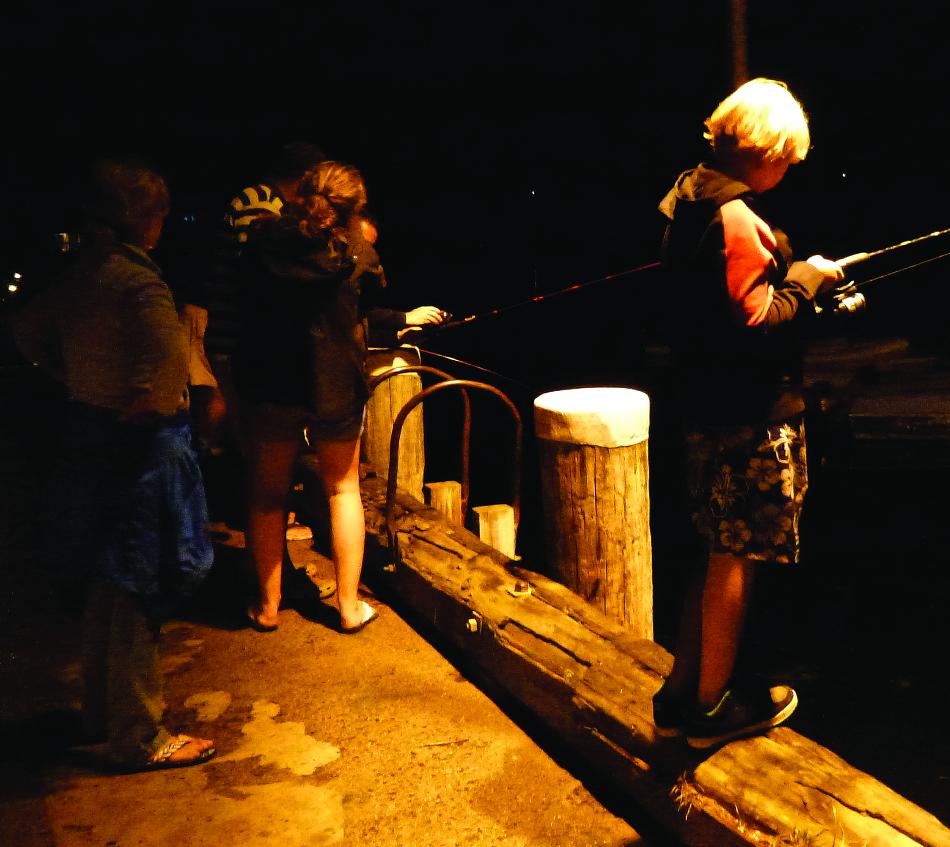 The father cups Sydney’s most recent catch in his hand and shows us how to clean a squid. While he is speaking he is stroking the squid. I reach out and run my fingers along the firm, smooth flesh.

We talk recipes. I am making paella the next night, which is one of the reasons we came for squid. Sydney asks us to please take some of his catch. We do, and he and his dad know they will be respected. But we are not done. The night is fine, the air calm. We continue to optimistically toss our clunky lures among the cruising squid, as we watch Sydney pull one after another high through the air.

Then a wide, fat seal races into the group of squid. We yank our lures out, and a hundred squid explode from the water, shooting two feet above the surface and sending spray in all directions as they make desperate leaps away from the predator. The light on the erupting water droplets, the shimmer of the colorful skin of the squid—they are finer than any Fourth of July fireworks. The seal circles two more times before heading out of the narrow area between the dock and the floats. The squid return to their calm, silent cruising.

For about half an hour Sydney’s dad has been suggesting that they go home, but the squid are still thick. Syd and his dad stay, but we leave. As we walk up the ramp to the car we hear Sydney say, “Just one more. Please, Dad?”

Karen O. Zimmerman is a graphic and web designer who lives, works, and goes fishing on Mount Desert Island.

Cut the bodies of the squid into rings, quarter the tentacles, season with salt and pepper, and set aside.

Add saffron threads to clam and chicken broth and warm.

Heat the olive oil in a paella pan or large sauté pan over medium heat and sauté the onion and garlic and pepper for about 3 minutes. Add the tomato and sauté for a further 3 minutes, until paste-like, scrape to edge of pan. Add more olive oil and sauté squid and shrimp two minutes. Stir in sofrito (the tomato mixture), and sprinkle with paprika.

Add rice in the shape of an X, then stir it in and distribute evenly. Slowly pour 31⁄2 cups warm broth over rice, trying to cover all the rice. Bring to a boil then reduce heat to a simmer.

Add clams and mussels, hinge side up, in a
circle. Sprinkle with peas. Do not stir.

Cook uncovered until all broth is absorbed, and all shellfish opened. Rice will be just about done, and slightly dry and crunchy on the bottom. Add remaining broth, cover and let sit 10 minutes.

Garnish with lemon wedges and serve.