By Rob McCall
Winter is not over until it is over, but I heard a song sparrow chanting in the Spanish rose bush in the pre-dawn dark this morning. Dear friends: The lofty clouds of spring are to the lowering clouds of winter as the Rocky Mountains are to the Great Plains. Winter clouds are mostly flat and colorless, spreading a monotonous, unbroken gray from horizon to horizon. But the clouds of spring thrust high into the heavens like towering peaks touched by white and gold, red and orange, great weightless mountain ranges drifting across the sky. Every now and then one of these mile-wide floating mountains will pass over, trailing a veil of rain to soak the thirsty earth below, like a titanic Portuguese man ‘o war sailing through the atmosphere. These clouds are not ethereal Everests and Denalis, like the grander clouds of summer; they are flying Adirondacks or Alleghenys or Awanadjos, quite grand enough to lift our winter-weary hearts to new heights. April showers dampen the danger of fire for the time-honored spring practice of burning the fields. Blueberry barrens are traditionally burned every other year, and now and again the cleansing fires may wander off to devour an old foundering house or reveal an ancient family cemetery hidden for generations in the puckerbrush. According to our fire chief Denny Robertson’s fine book, In Guardians’ Footsteps, controlled burns in springtime provided a modest source of income for cash-strapped fire companies in former days. Mountain report, mid April Like the buds on the birches, Awanadjo—Blue Hill or “small misty mountain” in the Algonkian language—is swelling too, the soft forest duff soaking up the rain and passing it to the thirsty roots of the mosses, grasses, and trees that cover the slopes like a glad and bushy pelt. Here and there the pilgrim can see evidence of how the mountain’s four-legged inhabitants wintered over. Rusty piles of fir- and spruce-cone scales litter logs and flat rocks in every direction; the leftovers of many a red squirrel’s supper. On rockier slopes, oak saplings stripped of bark by porcupines stand like ivory antlers against the sky. Tunnels left by mice and voles searching for roots to chew wind sinuously through the matted brown grass. No hiding places down there now that the sheltering cover of snow is gone. Still no ravens to circle, gurgle, or chatter around Awanadjo’s misty mountaintop. Wild speculation It’s April. Nobody likes paying taxes, but what if we were given an itemized receipt from the government telling us exactly where every dollar went? We get a receipt virtually everywhere else, don’t we? Then, what if WE decided where our taxes were to go, dollar for dollar? Wouldn’t that feel more like a true democracy than this, where they promise you everything and then do whatever they wish? And then, what if Election Day were changed to April 16? Ah, April. 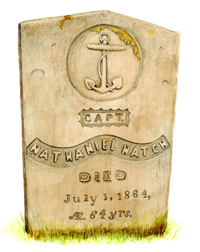 Seedpods to carry around with you during the month of April From William Cullen Bryant: “There is no glory in star or blossom till looked upon by loving eye: there is no fragrance in April breezes till breathed with joy as they wander by.” And from Edna St. Vincent Millay: “April comes like an idiot, babbling and spewing flowers.” Natural and un-natural events, early May Talking about the weather never fails to excite the old-timers. Trouble is, how do we remember the weather from one year to the next, never mind from 10 or 20 years ago? Fortunately, the historical record is not always blank. One of the early settlers of our town, Jonathan Fisher, faithfully recorded the weather in his journal for many years. Some 200 years ago this week he noted the following conditions: “Very cold…. Snow in the morning about 2 in. deep…. Snow banks among the bushes in my pasture are yet found about 2 ft. deep. Cold northerly wind has prevailed for 6-8 days, very little green grass to be seen, most people destitute of hay; some cattle have already died through hunger.…” Two hundred years later, we had chilly, wet weather with some frost nipping the buds on early apples, but no snow on the ground and the cattle seemed to have been doing fine. But I wonder, who will remember all that 200 years from now?

Illustrations by Candice Hutchison
Field and forest report, early May Pear trees are in bloom in yards and orchards, and the soft white-on-copper bloom of wild shadbush, Amelanchier spp. is beginning to appear in the woods as well as winsome bloom of beach plum, Prunus maritime, along the shore. In the meadows, bluets, or Quaker ladies as they are often called, and Canadian white violets are offering their tiny, spiky white blossoms to the veiled sun, but not getting much in return. Dandelions are in bloom, while yellow coltsfoot, Tussilago farfara, is going by. The lupine leaves are the size of a toddler’s hand, with a crystal jewel of rain or dew in the center. All of these are hardy enough to take a few frosts without flinching. And the fire company is breathing a good deal easier now that the rains have come. More natural and un-natural events, early May Motherhood is a most natural event, and war is a profoundly un-natural event. Julia Ward Howe is best known for her stirring Civil War hymn “The Battle Hymn of the Republic,” which she wrote after the first battle of Bull Run in 1861, when many thought the war was glorious and would end in a few weeks. But after watching four years of that brutal War Between the States leaving two-thirds of a million dead and millions maimed, as well as the nearly 200,000 killed in the Franco-Prussian War, Julia Ward Howe had a profound change of heart. In 1870 she published a national Mother’s Day proclamation for peace. Herein is found the real meaning of Mother’s Day: Arise then...women of this day! Arise, all women who have hearts! Whether your baptism be of water or of tears! Say firmly: “We will not have questions answered by irrelevant agencies, Our husbands will not come to us, reeking with carnage, For caresses and applause. Our sons shall not be taken from us to unlearn All that we have been able to teach them of charity, mercy and patience. We, the women of one country, Will be too tender of those of another country To allow our sons to be trained to injure theirs.” From the bosom of a devastated Earth a voice goes up with Our own. It says: “Disarm! Disarm! The sword of murder is not the balance of justice.” Blood does not wipe out dishonor, Nor violence indicate possession. As men have often forsaken the plough and the anvil At the summons of war, Let women now leave all that may be left of home For a great and earnest day of counsel… Whereby the great human family can live in peace... Seedpods to carry around with you during the month of May From Oliver Wendell Holmes: “The real religion of the world comes from women much more than from men—from mothers most of all, who carry the key of our souls in their bosoms.” From Roseanne Barr: “There’s a lot more to being a woman than being a mother; but there’s a hell of a lot more to being a mother than most people suspect.” And from Paul Simon: “My mama loves me, she loves me. She get down on her knees and hug me… loves me like a rock; loves me like a rock of ages.” Natural events, late May We were delighted to watch the five, yes, FIVE baby squirrels dashing in and out of the hole and round and round the trunk and branches in the old pear tree outside our kitchen window last year at this time. The mother ate hungrily several times a day under the bird feeders, but she didn’t allow the little ones to leave the tree for even an instant. They had yet to touch the ground, which meant she was nursing them all, a formidable job as all five were nearly as big as she. Somehow, this got me thinking about natural economics, the ancient universal system in which each creature gives what it has and gets back what it needs. We put out birdseed, which feeds the birds, squirrels, and chipmunks. In turn, we get the benefit of the birds eating bugs and singing for us, and the squirrels planting trees. The squirrels, for their part, cache nuts and seeds far and wide. These feed countless creatures and start the forests of tomorrow. The trees, in their turn, take water, sun, and soil, and make wood, leaves, nuts, and more soil, all of which enrich the natural economy. They don’t take more than they can use. They don’t hoard. They waste nothing. In good times if one has plenty, all have plenty. In bad times, all suffer alike. This is natural economics, and along with every other creature we humans practiced this same system for eons. Mountain report, late May A hike up Awanadjo is graced by the green luminescence of soft new leaves glowing through the few fleeting days before they become hardened and opaque to the light. They are like young children “trailing clouds of glory” into the world before the “shades of the prison house” fall upon them. On the forest floor look for Canada mayflower, like a tiny lily-of-the-valley, which it is. You can also find starflower spangled over mossy ground and the ivory clusters of wild viburnum on the forest’s edge. On the ledges and in clearings look for the bright magenta of rhodora, New England’s wild azalea, and see the tiny white-and-pink, apple-like blossoms of huckleberry, while in the misty morning on the misty mountain the hermit thrush pipes its breathy call. 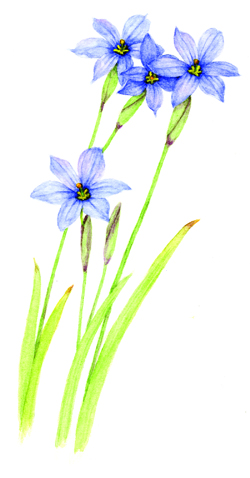 Field and forest report, late May The spires of Lupine coming into bloom rise above the fading blossoms of bluets and the yellow petals of common cinquefoil, while blue-eyed grass brightly winks at the sky. Patches of blueberry bushes are hung with tiny white bells, drawing native pollinators as well as tourist bees from away, come to taste downeast nectar. Rank opinion All these play their own intricate part in the astoundingly complex natural economy, which is the natural ecology, giving what they have, taking what they need and no more. Unfortunately, somewhere along the way we humans seem to have gotten lost. Now, success seems to mean taking more than you can possibly use, and giving back as little as you possibly can. Call it “un-natural economics,” and it could very well be the ruin of the race. And a two more seedpods to carry around with you From Garrett Hardin: “The major opposition to ecology has deeper roots than mere economics; ecology threatens widely held values so fundamental that they must be called religious.” And from Benjamin Franklin: “Money has never made man happy, nor will it. There is nothing in the nature of money to produce happiness. The more of it one has, the more one wants.” That’s the almanack for this time. But don’t take it from us—we’re no experts. Go out and see for yourself.
Yr. mst. hmble & obd’nt servant,
Rob McCall