By Peter Bass
Nothing ever seems as cold as the inside of an unused summer cottage in the winter. The periodic visits we make to the cottage in winter always give me a shiver, probably because the setting itself is so deeply associated with open doors and warm breezes. The shock of opening the kitchen door and realizing that the visual clues are at odds with the temperature makes the chill seem deeper. We make a quick check to make sure that no teenagers with too little to do have dropped by to see if the liquor locker is empty, and that the collection of varmints that used to drop by for a snooze and the few bits of dog kibble that had dropped behind the refrigerator have decided that our housekeeping is too good. If the sun is warm we linger a moment on the porch with our memories of parents and grandparents and children and grandchildren. I can now say that I have been each of those things on this very porch at one time or another. Then we smile quietly and head home. Now let’s hit the cyber porch and see what’s happening. 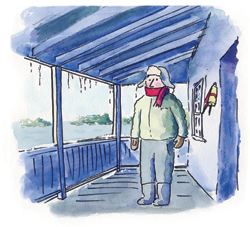 All illustrations by Ted Walsh
A Torrefying Development We have more than a passing interest in Maine’s North Woods here on the porch, having enjoyed fishing, hunting, paddling, and just hanging around this great swath of land. It is the great natural resource of inland Maine. The sharp reduction in the use of paper in the electronic age due to e-mail and online news, and, most recently, the decrease in print advertising in the Great Recession, has hit places like Millinocket and East Millinocket hard. A year ago the East Millinocket mill, which had been closed, reopened as Great Northern Paper again under the ownership of investment company Cate Capital. The fate of the closed Millinocket mill, however, awaits more favorable market conditions. Now something has happened, and it involves a word no one on the porch had ever used before: torrefication. It derives from the French torréfier, “to toast.” Evidently, the heat output of wood pellets that have been made from wood biomass then toasted in the absence of air is about 30% greater than your garden variety wood pellets. This toasted product, torrefied wood, can be used as a co-fuel in coal plants to reduce emissions and is in demand in Europe and the United Kingdom for just that purpose. Since the product has a heat density similar to coal, the economies of manufacturing and transportation make the product a viable fuel even with a long boat-trip factored in. Cate Capital is in the process of building a $48 million plant and machine to produce torrefied wood pellets in Millinocket, according to an article in the Bangor Daily News. In November, demolition of some buildings on the Millinocket Great Northern site was taking place in advance of construction. If all goes well in the next years, as many as five machines may be in operation there. Each will convert 250,000 tons of wood waste into 110,000 tons of uber-pellets annually. A toast is in order. It’s ALIVE A story we have been following for a couple of years, harnessing the tides for power generation, achieved a significant milestone in mid-September: the connection went live. Maine’s own Ocean Renewable Power Company and Bangor Hydro connected the first generating unit to the grid.(See p. 62 for more information and photographs of the project.) Remember the restaurant slogan that went something like, “The lobster that you eat today spent last night in Casco Bay”? Think instead, “The electrons that you are using to burn your toast today spent last night in Cobscook Bay.” (I am sure my understanding of physics has a few holes in it that some reader will point out; just think of me as a big-picture kind of guy.) According to a Bangor Daily News article, the generating unit that went online is made up of four horizontal turbine units, the blades of which look like long spiraling ribbons but are actually foils like airplane wings, and spin the same way whether the tide is running in or out. (Get your head around that!) A lot of grant money went into the startup of ORPC, and the company expects to be profitable by 2020. The University of Maine is heavily involved. Mast builder Hall Spars is the principal subcontractor for the turbine units, which are made of composites, as are the spars of racing sailboats. 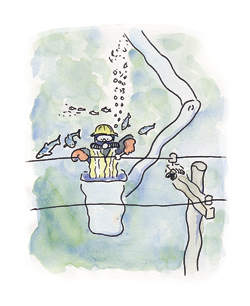