By Rob McCall
Winter is not over until it is over, but I heard a song sparrow chanting in the Spanish rose bush in the pre-dawn dark this morning. 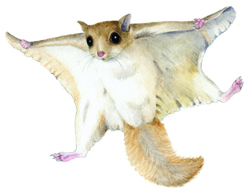 Illustrations by Candice Hutchison
Dear friends: A few years ago I mentioned in this space the never-ending battle with squirrels to keep them out of attics and bird feeders. The battle has its peculiarities, not the least of which is that some of us hold a grudge against a particular squirrel color: some hate the reds, some hate the grays. Generally, in this country, when we favor any squirrels it’s the grays over the reds. In England, it’s the other way around. It can get ugly out there. My former brother-in-law was a professional exterminator and hated all squirrels as “bushy-tailed rats.” My own brother, a peaceful man of the cloth, used to go right off the deep end, opening the back door a crack and firing a pellet rifle at marauding squirrels on the bird feeder. His wife finally took down the feeder. To be honest, I shot a few squirrels myself for no good reason when I was in my 20s. For some time now the church attic has been sheltering a number of unseen squirrels, whether red or gray we did not know. When you have a high, vaulted attic the size of a basketball court, they’ve got a good long run from one end to the other and can cause a mighty racket when they get going, quite unsuitable for silent meditation. Recently the squirrels were causing so much disturbance it was agreed by the powers that be that something had to be done. The scriptures were searched, sages and oracles were consulted; all signs pointed to doing it ourselves in the thrifty Maine fashion. Soon enough several borrowed cage traps baited with peanut butter were set in the enormous post-and-beam attic. We checked the traps daily, giving considerable thought to where any captives might be set free. This reminded me of the time someone asked the late Shirley Sargent, who was the local nuisance animal expert, where he released the animals he trapped. “Well,” he said, “the ones I catch in Surry I release in Blue Hill, and the ones I catch in Blue Hill I release in Surry.” After checking the traps in the ancient attic for a couple of weeks and catching nothing, imagine your commentator’s great surprise when he found not a gray squirrel, not a red squirrel, but a northern flying squirrel, Glaucomys sabrinus, calmly sitting in a trap. Flying squirrels are far from rare, but being nocturnal they are not often seen by those who go to bed around 9:00, as I do. This one was smaller than a red squirrel but larger than a chipmunk, and had huge black eyes. I couldn’t help but imagine the religious rapture our parishioners might experience if one of these furry fliers launched itself from the top pipe on the organ in the balcony and sailed over their heads to land on the pulpit during the sermon. As it was, I took the silvery little critter about five miles to the transfer station and let it go in the snow. It looked around quite forlorn and bewildered, and then darted under an old refrigerator on the scrap pile. With a lump in my throat I left it there and went back to reset the trap in the cold, cavernous attic, hoping we wouldn’t have to do this too many more times before we were done. Meanwhile the squirrels—red and gray, English and American, even the flyers—go about their ancient business of spreading seeds and nuts far and wide, quietly and relentlessly planting the wild fields and forests of the future to the benefit of every living creature. Seedpod to carry around with you From George Eliot: “If we had a keen vision of all that is ordinary in human life, it would be like hearing the grass grow or the squirrel’s heart beat, and we should die of that roar which is the other side of silence.” And from Sydney J. Harris: “If a small thing makes you angry, doesn’t that say something about your size?” Field and Forest report In Maine in early March it’s unusual to hear anyone comment on the beauty of a snowstorm, but that’s exactly what happened a couple of years ago at this time when we got a real beauty. The schools were closed, the plowboys were happily busy, and people at the post office were smiling not grumbling about the weather. The chickadees and finches were chirping cheerily around the feeders, and the crows were laughing from the treetops. That’s because we hadn’t had a nice storm like that in many weeks. The last one was back around Christmas, if I remember right. Word was that it wouldn’t last; happiness is fleeting and melts like a March snow. But then so does trouble. 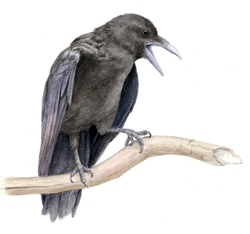 Natural and un-natural events At last a few warm days in March draw the frost out of the ground. The roads are posted and the brooks and streams are chattering and roaring over the rocks and singing joyous hymns of release from their icy prison. Now the blustery winds sweep winter’s dust and debris in swirling clouds across the fields into the woods. The sun is above the treetops and nearly blinding on a cloudless midday. Bones long-chilled crave warmth, and skin long-covered yearns for sunshine. Dogs and cats rest on the sunny side of the house, children shriek and run at recess, and elders sit in the sun in the afternoon. Buds on trees and shrubs swell silver on a warm day, then shrink tight at night. Of course we know the snow could come again, but Old Man Winter’s back has been broken (as the Old Farmer’s Almanac bluntly puts it), and his days are numbered around here. Another seedpod to carry around with you From William Alexander: “Earth teach me to forget myself as melted snow forgets its life. Earth teach me resignation as the leaves which die in the fall. Earth teach me courage as the tree which stands all alone. Earth teach me regeneration as the seed which rises in the spring.”

Mountain report The woods of Awanadjo—Blue Hill, “small misty mountain” in the Algonkian language—are still filled with slowly melting snow and ice, but the open fields are nearly clear. Coming down over the high fields I can feel the soft body of the real live Earth giving underfoot with each step: unpaved, unplowed, unsprayed, unmowed, no flat surfaces, no straight lines, no sharp corners, no human designs, simply the wild earth left to its wild self. The buff stubble underfoot, the white and red withes of birch and cherry, the dried stalks of goldenrod rattling in the wind, the smell of wet, living earth, and the sun flashing on the cold bay all work together to untie some monumental knots in my heart, to untangle veins and sinews and send the singing sparks of life coursing freely through my winter-weary frame again. Rank opinion We criticize the young for spending so much time in cyberspace, and yet we spend most of the time in entirely human-engineered spaces ourselves. Rarely do we venture out to the original wild places, still abiding as they were when the world was young. We spend our days and nights surrounded by human-made gewgaws, gimcracks, and gadgets, amid colors and shapes and textures not found in Nature, seeing nothing but human signs and symbols, and hearing nothing but human sounds. While four thousand millennia of innate wisdom and successful life problem-solving extend in every direction as far as the eye can see, we sit inside our boxes talking about thinking outside the box. A final seedpod to carry round with you From Eric Hoffer: “You can never have enough of what you don’t need to make you happy.” That’s the almanack for this time. But don’t take it from us—we’re no experts. Go out and see for yourself.
Yr. mst. hmble & obd’nt servant,
Rob McCall