Why every 12-year-old needs a Boston Whaler.

By Bill Mayher
By Bill Mayher In 1958, Richard Fisher combined his engineering talents with Ray Hunt's design visions to bring the 13-foot Boston Whaler into the world. The pair quickly found that they had tapped into a wellspring of want that propelled this revolutionary rectangle of fiberglass and foam into one of the most successful and beloved boats of all time. And it couldn't have happened without boys and, as we shall see, girls. Beginning in the late 1940s and early 1950s, the leading edge of the middle class was just breaking out into second homes along the seashore and out at the lake. Dad worked and Mom rode herd on the kids. Naturally enough the kids wanted to be out on the water. The prospect of this scared Mom half to death until Dad came home with this funny looking boat on a trailer. Maybe Dad had seen the Life magazine story showing a proper gentleman in sport jacket, bow tie, and homburg sitting calmly in the stern of a Boston Whaler while a giant buck saw, stabbing up from the deep, cut the boat in two. Perhaps he'd seen this same gent in an advertisement streaking up the rapids of a tidal river at a steep angle. Or maybe that father had read the brilliant advertising headline, "The most compelling reason to put your trust in a Boston Whaler just went to baseball practice." 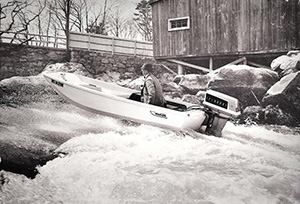 Early ad campaigns featured Whalers being put to improbable tests. Photos courtesy Boston Whaler (2)
The other thing that brought Dad around to a Whaler is that he knew boats, and guys who knew boats liked the Whaler right off. They liked the lateral stability afforded by the twin keels, and they appreciated the unibond construction, in which liquid foam injected into the cavity between the two fiberglass skins cured and bonded the hull into an unsinkable whole. Finally, they knew that two-stroke outboards had just taken a leap forward in terms of dependability, and were impressed that the original 13-foot Whaler could skim along with what seemed like incredible speed when pushed by horsepower in the 9- to 25-hp range. So there you had it: a kid's need for independent adventure converged with a parent's need for safety. This convergence, more than anything, explains the success of the first Whalers on the scene, despite what appeared to be, at first glance, little more than a non-nautical hodgepodge of curves and angles. With these basics of the narrative down, let's dig a bit deeper into the attitudes of the time to further explain the boat's popularity. In 1958 when the first model came on the market, the first tiny shoots of what would eventually blossom into the social revolution of the late 1960s were just breaking through. Young people raised by World War II veterans were beginning to stretch against my-way-or-the-highway boundaries. We're not exactly talking about Jack Kerouac down at the junior yacht club, but without doubt over the next few years a whiff of revolution wafted over even the most buttoned-up of summer colonies. An unsinkable 13-foot outboard pushed by an Evinrude 25 became the vehicle in which boys and girls achieved the escape velocity they so earnestly craved. 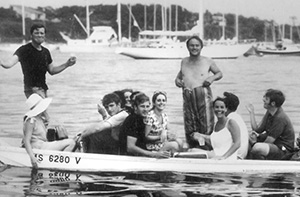 There are thirteen young sailors (count 'em) in this thirteen-foot Whaler. Photo courtesy Tony Correa
Interestingly enough, a lot of young people took this "ticket to ride" all the way to careers as outstanding professional mariners; an unintended consequence of their yen for independence. Take my friend John Correa's boyhood experiences with a Whaler down on Cape Cod. Although his mother wanted her boys in sailboats not stinkpots, because of good reports about the new Whalers from uncles and cousins along the Bass River where the family homestead was located, she relented, and the Correas got one of the earliest models in 1959. It was a big deal for young John and his brother Tony, a big thrill. John said he used to wait for those special days when the afternoon southerly blew in hard against an ebb tide, setting up a steep, roller-coaster chop just perfect to crash into with all his free-radical 12-year-old energy. Then he'd run back up the river on the swells and do it all over again. It was a way to get out on the edge, a way to test his courage and hone skills that would last a lifetime. He still has that boat (kept for sentimental reasons not because of continued interest in bone-rattling experience). And the seamanship skills he gained back then, as well as a taste for the wild edge in boats, is with him still. Then there is his friend Robin Lincoln, also of Bass River. One late 1960s Monday in early August, she and two rookie mariner friends, Cindy and Debbie, decided to take the approximately 30-mile ride in the family's Boston Whaler 13 out to Nantucket to visit a friend. Her father, a man of monumental firmness, was down in New York for the work week, leaving her mother, a woman with a virtually unlimited faith in the good sense of her children, in charge. So off Robin and her friends went on a flat-calm morning on the kind of day that old-time Mainers know as a weather breeder. But how were they to know? That night, needless to say, a front came through, and on the next day it was followed by powerful northwest winds. The girls hung back a couple of days, but on Friday, with Robin's father scheduled to arrive home for the weekend in the late afternoon, it was do or die. Or as Robin puts it to this day, "It would be better to drown than to face my dad." As they pounded out of Nantucket Harbor by Brandt Point, big boats that had preceded them were turning back. With the warnings of men back at the dock ringing in their ears, and while clutching a plastic placemat chart with the words "Not to be used for navigation" printed sternly across it in several places, the girls plunged on. Perhaps to avoid lengthy explanations about wet clothes when they got back home, they stripped down and put on bathing suits, tying their underwear to the little chrome running-light mast featured as stock equipment on Whalers at the time.
With the warnings of men back at the dock ringing in their ears, clutching a plastic placemat chart with the words "Not to be used for navigation" printed sternly across it in several places, the girls plunged on.
Out in the middle of Nantucket Sound, with the breeze intensifying and believing it might be her last meal, Cindy opened and gobbled up a can of cold baked beans. Debbie moved to the bow and started to pray. Captain Robin held her course, all the while wishing her little placemat chart differentiated the various water tanks and radio towers on the distant horizon in a way that might actually allow her to find her way back home to Bass River. Of course they made it. Robin and Debbie and Cindy are still friends, and the Whaler, which Robin owns to this day is called the USS Underpants. For Robin, other adventures followed in the Whaler and later in her gaff-rigged Wianno Senior Salt Works. Sleeping out on Monomoy Island, getting desperately lost trying to find Martha's Vineyard in the fog-all an attempt to gain independence from an overbearing father in an era that was fast coalescing into what became the Late Sixties. Trying to get unstuck was what it was for a lot of kids at the time. "It was what our generation was all about," Robin allows. "I didn't do drugs, but I did do that stuff in boats." 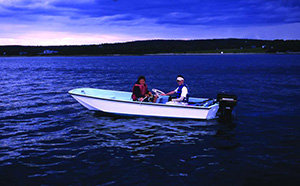 The USS Underpants is still in service nearly 50 years later. Benjamin Mendlowitz
Dick Fisher was 12 when his father, Richard Fisher, brought out the first Whaler in 1958. The family was living at the time in the South Shore town of Cohasset, Massachusetts. There had already been plenty of boats in Dick's young life: Little "Rookie" sailboats, a tiny outboard designed and built by Richard Fisher called Pogo, and then the first Whaler. "You learn 90% of what you need in life in a little boat," Dick Fisher says today. "Being a kid out in a boat, you're free. The consequences are all your own. You can't whine about it being someone else's fault. You gain maturity each time. It's like climbing a tree. What a way to start a kid out! It's funny, but you don't see much of it these days. "My dad really believed in that stuff. He encouraged us to think for ourselves, take chances, get outside, learn common sense. He really encouraged independence. He set an example in the way he looked at a problem and honed in on solutions until he got it to work. I saw how long it took him to get the foam [in those prototype Whaler hulls] to stick to the fiberglass. How many failures there were before he got it right." Lucky for a lot of kids back then and even today, Richard Fisher stayed with the program. At the end of Mark Twain's Huckleberry Finn, Huck says, in one of the great lines in American literature that he plans to "light out for the Territories." If by chance the novel were magically relocated to the 1960s, the raft Huck would have had in mind to "light out" on would almost certainly have been a Boston Whaler. Bill Mayher lives in Brooklin, Maine, and is one of the founders of the new maritime website, offcenterharbor.com.