All illustrations by Ted Walsh
There is nothing like the issue of MBH&H that arrives just prior to the writing of this column, the annual “Boats of the Year” issue (March 2012, #118). It reminds us of the year past and the great contribution made by all things boat to our regional economy. It comes in the depth of winter when we most need our boating fix. And best of all, we know that when the next issue (this one) comes out it will be time for the Maine Boatbuilders Show, the vernal equinox, and 8-year-olds drooling over new fishing rods in the hardware stores. This last image hardly holds today; there are fewer local hardware stores and of those that still exist, few of them carry any fishing tackle. The Rockwell-esque image of a young boy or girl eagerly racing out of the hardware store, new rod in hand, just doesn’t translate to the strip mall, big box, everything store. That’s enough nostalgia. Let’s see what obscure news caught the interest of the regulars on the virtual porch this winter. A Few Smackerels Our managing editor forwarded an article to me that seemed too good to be true, but after some poking around cyberspace it seems that the current currency in the underground bartering system of Federal prisons actually is vacuum-pouched mackerel fillets, one pack of which is a “mack.” Officials don’t like cans because they can be turned into weapons; i.e., mack the knife. What I found too good to be true is the wide variety of fish-related jokes a clever journalist can make out of such fodder, in this case Justin Scheck of the Wall Street Journal. The opening tagline of Mr. Scheck’s article, titled “Mackerel Economics,” was “Packs of Fish Catch on as Currency, Former Inmates Say, Officials Carp.” Mr. Scheck describes many piscine transactions (his term) in this underwater economy (my attempt to get in on the fun). “Macks” are traded for all manner of goods and services, in the same manner that packs of cigarettes formerly were used. A pouch of mackerel fillets costs about a buck, although commodity spikes threaten the exchange rate. Mr. Scheck’s article seems to be the source of most if not all of the other hits on the Internet. I hope that I have not been sucked in by some sort of journalistic April’s Fool joke, although it would be poetic justice in my case, considering an article I wrote in this issue some years ago (Thinking Outside the Hull, “Off Off the Drawing Board,” April 2007). It certainly seems to be true, and no, I’m not pulling your fin. 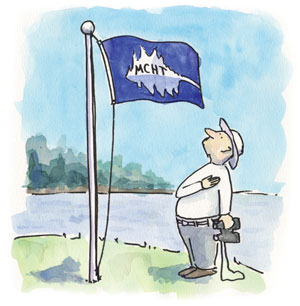 In the Trust We Trust We were pleased to note that 2011 was a banner year for the Maine Coast Heritage Trust, which seeks to preserve areas of beauty and wildness along the coast of Maine for future generations, through easements and outright purchase where possible. An article in the Bar Harbor Times outlined a long list of easements, purchases, and donations in the year past. Two were of particular note: a purchase from a private owner of a 516-acre parcel in central Mount Desert Island known as the Kitteredge Brook Forest, and the donation of a 192-acre parcel on Long Island (a.k.a. Frenchboro). The latter was given to the trust by long-time benefactor David Rockefeller and described as “spectacular” by MCHT Communications Director Richard Knox. I have been a follower of MCHT since the 1970s due to an odd coincidence. I was an undergraduate at Dartmouth, and Ben Emory, an early executive director of MCHT, was an MBA candidate at Dartmouth’s Tuck School. We crossed paths in what could be called an early “ecology” course, which was open to both graduate students and undergraduates. He was already excited about the nascent MCHT. As an undergraduate, I was mostly excited about what undergraduates at Dartmouth in 1970 were most excited about: where were the women? Anyway, after we graduated in our respective colleges/schools, Ben went on to lead MCHT and I entered graduate school at the Hinckley fiberglass shop working under Arnie Dow and Pete Gagnon. I value my graduate school education with Professors Dow and Gagnon highly. 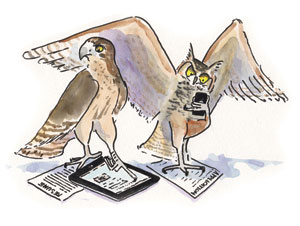