By Rob McCall
“This grand show is eternal. It is always sunrise somewhere, the dew is never dried all at once; a shower is forever falling; vapor is ever rising. Eternal sunrise, eternal dawn and gloaming, on sea and continents and islands, each in its turn, as the round earth rolls.”
—John Muir
Dear Friends: There is a way in which each season forgives the faults and failures of the one before. If summer was too hot and dry, autumn forgives with cool rain. If winter was too cold, spring waltzes in with balmy breezes. If spring is too wet, summer parches. And so it goes. Nature does not want to hold a grudge. She wants harmony more than discord and balance more than revenge. Wounds heal, blood clots, bones knit back together. Polluted water is drawn by the sun into the vast distillery of the clouds where it is purified to fall as pristine rain. If we clearcut for lumber or pulp, as we have in vast swathes of the Maine woods, the stumps and seeds soon sprout, skinned and barked trees grow new wood over their wounds, and the churned forest floor soon quietly carpets itself with green. I remember vividly as a boy in western Oregon passing through the aftermath of the great Tillamook Burn, wildfires that consumed 355,000 acres of old growth forest between 1933 and 1951, leaving a vast deathly landscape. Within a few years the forest was alive again with small spruce and fir shining green among the towering black snags. How long Nature will continue to heal and forgive our abuses, we don’t know, but it is manifestly clear that she wants to do so. End-of-the-World News Experts are now saying that the formula long used for calibrating the Mayan calendar with the Gregorian or European calendar may be off by 50 to 100 years. That means that the end of the Mayan calendar—and the “The End of the World As We Know It”—instead of coming on December 21, 2012, as many have predicted, may be many years ahead of us, or even many years behind us. Your commentator is inclined to think that the world has ended several times already—such as on Election Day, for example—and will end and begin again and again before it is done. 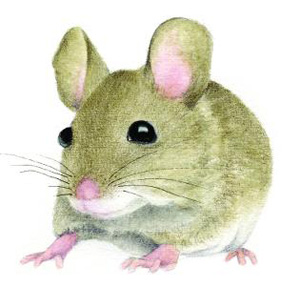 Illustrations by Candace Hutchison (3)
Natural events, mid November The leaves are mostly gone from the trees, and there is ice on the puddles in the morning but no severe cold yet. Lupine and red clover can still be found in bloom here and there in the high meadows, and the moss and lichen on the ledges and cliffs have turned a bright green on their rich diet of rain and sunlight now that the sheltering leaves have fallen. The bare trees also reveal great clusters of leaves in high branches, winter homes for squirrels. These nests start with a base of twigs, moss, and damp leaves in the crotch of a branch. Over this a dome of twigs or vines is raised. Then the whole is packed with leaves and lined with shredded bark or even paper, forming a snug cave just big enough for two. That’s that big clump of leaves you see high in a tree. How’d you like to ride out a windy night in that? A long career of trying to make our bird-feeder squirrel-proof ended a while back. Here’s how it happened: Frustrated by the marauders, I labored long and hard one day with ropes and stepladder to hang the feeder out of reach of even the most intrepid bushy tail. When done I went back into the house to watch through the kitchen window as a gray squirrel poised very high in the pear tree with its tail flicking, then hurled itself recklessly out into space, struck its head upon the feeder, and fell to the ground as if dead. All of this also happened before the tender eyes of my better half. The heroic squirrel somehow roused himself and proceeded to scratch his way up the clapboards on the outside of the house to hang by his front legs from the window sill, stare in the kitchen window at us, and roundly scold me for making his life so difficult. At this, Rebecca had had enough. Without another word she went into the pantry, scooped a quart of prime black-oil sunflower seed from the bag, went out the kitchen door, and spread that load of seed on the ground under the bird feeder so that “the squirrels would not hurt themselves.” I was abashed, but also relieved that my squirrel-proofing days were clearly over, once and for all. The mice seem to move into our house this time of the year, too. Sometimes they turn up in that big bag of sunflower seed giving us an awful start when we reach in to get a scoop for the outdoor critters. I will curse the mice and scold them for a while, telling them they are not welcome and they’d better move out, if they know what’s good for them. Sometimes they do. Other times I have to take more drastic measures. But not until I have given them full and fair warning. A seedpod to carry around with you From Henry David Thoreau: “The squirrel that you kill in jest, dies in earnest.” Field and forest report, mid November 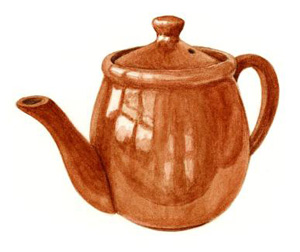 While the bears are bedding down and the deer are going to ground we are busy buttoning up the big box where we’ll winter over.

Field and forest report, mid December Snow is etched far and wide with the stories of animal activity written in a script that can be learned by the curious. Here a crow landed to forage under the snow. There the deer walked through the orchard and parted the white cover with their hooves, looking for apples. So evocative are these writings that we can almost see the creatures that inscribed them, and think their thoughts, too. Christmas See the round wreathes of balsam fir carefully constructed in the fertile female shape of the circle, as they have been for thousands of years. See the fir trees set up in so many homes, the ageless emblem of male power. These are symbols of the Old Faith, far older than any organized religion. Feel the cold wind from the frozen north, or the drear, wet wind from the east off the Great Water. Hear the last geese high above, honking and beating their way south. See the lights in the windows of the white houses and the white churches with their long spires reaching heavenward topped by weathervanes pointing to the four directions. See the sun start its sojourn back up toward the peak of the heavens, and feel the gut-deep joy at the returning of the light. Hold a new baby in its little snowsuit, hat, and mittens, and know something no theology can teach. Know that here no one religion can ever contain or explain the truth of this overwhelming Creation: present, past, or future. Natural events, January A midwinter snow day brings, along with its billows of snow, a great sigh of relief for many. The young roll over and burrow under covers like snowdrifts for another hour or two of sweet sleep. For the older, appointments and meetings are cancelled, a pot of tea is brewed, and an unplanned, empty day stretches invitingly ahead, offering time for daydreams, laughter, games, and small talk. The outdoors is transformed as earth and sky join seamlessly in a cloud of whiteness. Drifts reshape the ground, while trees, houses, fences, and stonewalls are festooned with white. Maybe the power goes out and the home is lighted by the peaceful glow of candles and oil lamps while the wind rattles the windows and howls in the chimneys. Only the plowman gets no rest. With the clank of plow and the whir of engine and hydraulics, he labors through the day and into the night to keep the roads clear for necessary travel and safe passage of emergency vehicles. Big snowstorms keep us in our place and remind us that, despite our fantasies of world domination, Nature is still in charge and our little lives must stand still in awe and wonder before the Greater Purposes of the Earth. Field and forest report, January Even in the middle of January we see clear signs of animal activity. Tracks of snowshoe hare and red squirrel scamper over the mountain, and now and then the trails of fox and bobcat wind through the clearings, but rarely cross. At the birdfeeder, along with the usual chickadees, we see titmice, red-breasted nuthatch, redpolls, and goldfinches, even white-tailed deer in the dim hours of night. Saltwater report, January 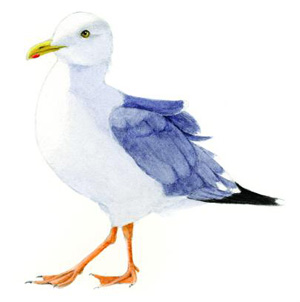 Down at the town wharf the sounds of squeaks and groans surround you as the ice floes in the harbor rise and fall with the tide. At lowest ebb, the ledges are armored like gladiators with shining white plates of ice. Gulls and ducks stalk back and forth over the frozen bay, foraging for morsels of mussels or frozen fish to fuel their inner fires. At high tide broken sheets of cloudy white rub against each other, smoothing their rough edges. In town the eaves of houses glisten with necklaces of clear icicles sparking radiant rainbows in the sun. The mill brook babbles under its crystalline covering, then pours over the mill dam into the bay to add more fresh water to the growing ice floes. Providentially for all life on earth, ice is lighter than water, so it floats instead of sinks. Were ice to sink, it would freeze lakes, streams, and bays from the bottom up, killing aquatic life, the source of all life on earth. Since it floats, ice forms an insulating cover, allowing life in the waters to survive our cold winters to be revived when the ice at last gives up its iron grip in spring. Ice is sometimes nice and will suffice. Finally, with the political season warming up, another seedpod to carry around with you From P.J. O’Rourke: “The Democrats are the party of government activism, the party that says the government can make you richer, smarter, taller and get the chickweed out of your lawn. The Republicans are the party that says government doesn’t work, and then get elected and prove it.” That’s the almanack for this time. But don’t take it from us—we’re no experts. Go out and see for yourself.
Yr. mst. hmble & obd’nt servant,
Rob McCall

Rob McCall is a journalist, naturalist, fiddler, and for the past 22 years, has been pastor of The First Congregational Church of Blue Hill, Maine, UCC. Readers can contact him directly via e-mail: awanadjoalmanack@gmail.com or post a comment using the form below.