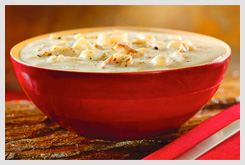 Chowder fans had lots to say about our
last "Mainely Gourmet" (MBH&H Issue 115)
A chowder trick First, let me say that I love your magazine almost as much as I love a good chowder, and your chowder recipes are quite good. (See “Mainely Gourmet,” MBH&H #115, June/July 2011.) But let me suggest a small trick that will make a great improvement to any of these chowders. Don’t dice your potatoes; I mean, forget about cutting them into small cubes. Instead slice the potatoes into small wedges or crescent-shaped pieces; the thin edge will melt away into the chowder to thicken it and create a richness that will be much appreciated, while leaving the wider part of the wedge to be savored along with your clams or fish. Wish I had some right now!
Victor Trodella
Yarmouth, Maine
A chowder secret Just had to comment on the fact that not one of the recipes in your June/July issue for fish and/or clam chowder calls for evaporated milk, which is (along with salt pork) the secret of authentic old-fashioned New England chowder. I also went on line and found very few recipes that called for evaporated milk—Grandma’s Recipe. I had a friend who complained to me one day that although she had tried many recipes for fish chowder, her husband complained they were not like his mother’s. I told her I could make one just like his mother’s, and I did. The secret? Evaporated milk.
Robin Johnson
Kensington, New Hampshire
High-class snips? You bet we are, and proud of it Well ain’t you the high-class snips with your measures, your butter, your cream. I’ll tell you how the common people—i.e., your ancestors—made chowder. Measurements were confined to how many would be eating, as in, “Here comes Willie, better add two potatoes.” The amount of seafood depended on the amount available. No butter was used, but the fry-out from pork scraps was (the scraps themselves being added or not according to taste). Onions were sliced and put in the pot with the potatoes to cook, the seafood being added later so it would not be cooked to mush. Just before serving, an amount of CANNED milk equal to the amount of liquid in the pot was poured in. NO effete butter or cream. Anyone with coastal tastebuds would still make it this way.
Nancy Morrison
Steuben, Maine
Damn straight! Sounds very similar to my grandmother’s approach, and my mom still uses canned milk. ALWAYS let it sit overnight!
Jennifer McIntosh, Associate Editor
Strange designs It was a pleasure to see the short discussion of Albert Strange in the recent issue, including the painting to make it even better. (See “From Whence It Came,” MBH&H #115, June/July 2011.) Of his 170-some designs there were probably at least 150 built, of which more than 30 still exist, most in good sailing condition. Phil Bolger drew a construction plan for Strange’s Wenda a few years ago, a design that had never previously been brought to the construction stage; a number of boats have since been built using those plans. The International Boatbuilding Training College, Lowestoft, England, has recently built a new boat to the Strange Cloud design, a 39' canoe-stern ketch. Most of the existing Albert Strange designs ended up in the collection of W. P. Stephens and are now part of the Mystic Seaport plans collection, Mystic, Connecticut. These boats are beautiful to look at and to sail. It would be wonderful to see more boats built to these designs. The Albert Strange Association has been working for more than 35 years to preserve the memory and the boats of Albert Strange (www.albertstrange.org).
Thad Danielson
North American Secretary, Albert Strange Association
Marblehead, Massachusetts 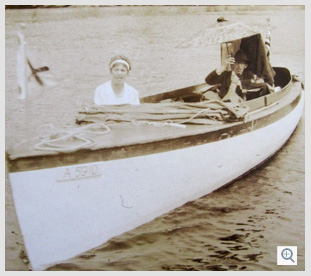 Click on the image above to
expand and view caption.
Can you help identify these boats? I run an historical society on Squirrel Island near Boothbay, Maine. Our theme for 2011 is pleasure boats in our waters over the years. We have lots of old pictures (see above) but not a lot of knowledge. I enclose two examples to see if any of your readers can help us identify these boats, which were moored at Christmas Cove and Squirrel Island in the early 1920s. They can contact me directly.
Tom Pears
Squirrel Island, Maine
tompears@hotmail.com; 603-379-2519 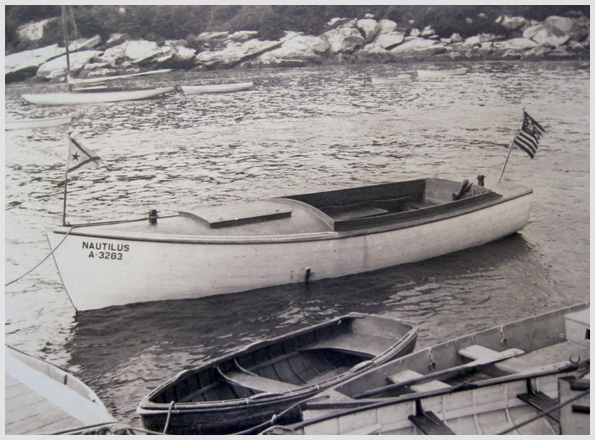 Nautilus at the dock. Registration #A3283. This boat was possibly built in 1926.
Fenders, not bumpers Peter Bass, in his column “View From the Porch,” always remarks about being on the lookout for “dangling fenders.” I totally agree with what he’s driving at, and I hope most of the other readers of your magazine do, too. Too many boaters out there know of them as “dangling bumpers.” Seems that every day I hear “boaters” referring to their “bumpers.” I’ll bet they couldn’t find such things in the index of any marine supply catalog, at least under that terminology.
Ken Weeks
Round Pond, Maine
Defending the fisherman anchor In the June/July issue (MBH&H #115), Joe Mair of Boothbay Harbor and Feasterville, Pennsylvania, took me to task for commending the traditional fisherman anchor (a.k.a. yachtsman or Herreshoff anchor), and he dismissed Roger Taylor’s characterization of that old-fashioned hook as “the most versatile.” No anchor is perfect, which was one of the main points of my cautionary tale, “Three Encounters With a Line Squall” (MBH&H #112). The fisherman, however, works well in some conditions where others don’t. It will penetrate a grassy bottom and take hold where a CQR or Danforth will “skate.” Properly set, it will keep your boat where you put it with less scope than most anchors. “Properly set,” of course, raises another important point: it’s often the anchorer, not the anchor, that’s to blame, as my own humbling experience made clear. All things considered, I am not inclined to part with the fisherman as one of the three anchors I carry on the Nancy B. It has served us well for 25 years, and I’ll continue to use it, taking care to match the anchor to the bottom and conditions. Nor will I disregard the advice of Roger Taylor, whose books on good boats and seamanship I admire, for he has spent much more time on the water than I ever will. I would also be happy to hear from other readers of this publication about their experiences with anchors and anchoring on the Maine coast.
Kent Mullikin
Swan’s Island, Maine,
and Chapel Hill, North Carolina
Roseway’s fishing “career” Roseway’s fishing career, as touched upon in Carl Little’s article, was brief indeed. (See MBH&H #115, June/July 2011.) If memory serves, the late Capt. Lambert Knight, who was a crewmember on the vessel’s one and only fishing trip, said that after about two weeks of fog on George’s Bank not a single swordfish had been spotted, much less caught. So the owner called the men aft and asked them how much money they would have made in a normal swordfishing season. Of course they had no trouble coming up with a figure. Roseway was then headed for New Bedford where the crew was paid off.
Bill Bunting
Whitefield, Maine
Credit where it's due The artist’s rendering of the Isobel, the design featured in “Off the Drawing Board” in MBH&H issue #115, (June/July 2011) was done by Brendan H. Riordan, who specializes in this type of work and is available to produce similar images for others. Interested parties may contact him as follows: Brendan H. Riordan, 207-236-9651 or 207-236-0758; or design@rockportmarine.com.