Illustration by Sam Manning.
Live in the present, launch yourself on every wave, find your eternity in each moment. Fools stand on their island opportunities and look toward another land. There is no other land; there is no other life than this.
—Henry David Thoreau
Dear Friends: In small towns we greet each other, even in passing. You know the “drive-by” wave. One finger off the steering wheel is the basic greeting. Two or three fingers raised signify more familiarity. The “whole-hand” wave is reserved for close friends or family, or those to whom we owe money or favors. On the street, we speak when we pass someone. To not speak means you are either from out of town or not on speaking terms. Maybe you remember Crocodile Dundee, straight from the Outback to the streets of Manhattan, greeting everyone with a cheerful “Good-day” while they either ignored him or scowled. Small town people understand this. In villages it’s common knowledge that everyone knows everyone else’s business. We rejoice when our neighbors rejoice, and we weep when our neighbors weep. When someone accomplishes something, everyone knows about it. It often shows up in the local paper. Did you make the honor roll or get a big promotion or hike the Appalachian Trail? We know, and we congratulate you. Did you lose a loved one? We know, and we bring casseroles and flowers to your house and we show up at the memorial service. 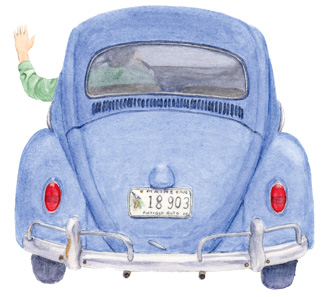 Illustrations by Candice Hutchison [3].
There is more, of course. Did you get busted for speeding, or worse? It shows up in the local newspaper’s police blotter. Did you neglect to pay your taxes? It shows up in the town report. Did you cheat on your wife? Did you act foolish at town meeting or the pub? We know, and we gossip about it behind your back, maybe even shun you. In fact, you might be shunned for nothing you ever did, but for something your father or grandfather did. Small towns see through deception or posturing. We know each other so well that there is no point in trying to pretend we’re something we are not. We are not impressed so much with credentials or reputations gained elsewhere as with hard work and dedication to our town and our values. There is a healthy conservatism about small town life that honors the past. The village is the cradle of human society. The earliest cities appeared about 6,000 years ago. Yet, evidence of villages dates back nearly 20,000 years and there were doubtless thousands of villages long before. This means we’ve had far more experience living in villages than in cities, and we’ve learned the essentials of social survival on this scale from long, hard experience. So a certain amount of conservatism is healthy in preserving this hard-earned wisdom passed down for thousands of years. The worst of small town conservatism is a stubborn resistance to change or to any idea that bears the slightest hint of originating somewhere else. We’ve all heard the story about the newcomer who stood up at town meeting to tell them how it was done in his former hometown. “If it was so good there,” came the response, “then why did you leave?” Rank opinion For good or ill, change is going to come, regardless. But too much change can cause a town to lose its moorings of heritage and history. And too little change can cause it to lose its heart and hope, and to dwindle and die in the nostalgic prison of the past. True to the past, but ready for the future; small towns will survive. Seedpods to carry around with you From Mark Twain: “Human nature cannot be studied in cities except at a disadvantage—a village is the place. There you can know your man inside and out—in a city you but know his crust; and his crust is usually a lie.” And from Burt Bacharach: “A small town is a place where there’s no place to go where you shouldn’t.” Natural events, November The white-tailed deer, Odocoileus virginiana, can be found in all but five of the United States, south to Peru, and north into Canada as far as the deciduous forest extends. They are highly adaptable and can live in forest, prairie, and savanna. Bucks may weigh as much as 300 pounds and be nearly four feet high at the shoulder, but usually less. Does may rarely weigh as much as 200 pounds. They can run swiftly for miles, swim equally great distances, and jump an eight-foot fence, as any farmer, gardener, or orchardist will tell you. Deer are elegant in appearance and motion, and through the ages have represented the mythic ideal of speed and grace in the chase as noted in poetry, song, and psalm. Now, in the month of the deer season, we see pickups parked by the road in wooded areas and hunters in blaze orange. But there are fewer these days than in the past, as each year fewer hunting licenses are issued. Last year in Maine, deer populations were down, in part due to two hard winters in succession. 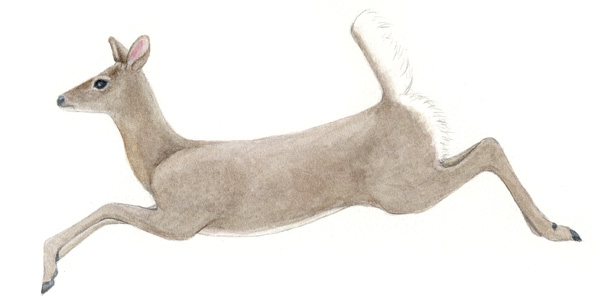 Others claim that bears and coyotes are diminishing the herd. Still others think that youngsters are more interested in playing video hunting games in the comfort of home than in getting up before dawn and spending hours in the November cold waiting for the uncertain appearance of the buck of their dreams. Whatever the reasons, the deer hunt is not what it used to be. In ancient America, humans on foot would run the deer to exhaustion before making the kill, and then drag or carry the carcass for miles back to camp. Nowadays, trucks and ATVs bring hunters to and from the kill with little effort. Infrared scopes, robotic digital cameras, automatic feeders, electronic calls, and laser-sighted rifles ease the rigors of the hunt, sometimes to the point of unfairness. Still, there are thousands of good hunters whose respect for the deer and the woods make the deer hunt an elegant expression of tracking and woodcraft. The traditional hunter’s vast knowledge of the living ecology of deer and forest, and his high standards of sportsmanship are precious resources that are sadly diminished with the size of the herd. Natural events, early December It’s curious that just now when our northern skies and lands are becoming darkest, nearly every religion is entering a season of light. The shortest days and longest nights loom in on us, and yet everywhere people are gathering and praising the light. Is this a sort of denial or insanity, or an overdose of the opiate of the masses? Don’t they notice the ever-growing night? Don’t they see dark wars raging while they celebrate the birthday of the peaceful Buddha, or chatter on about the Prince of Peace, or light the Menorah? We make fire in our fireplaces, we light candles. We hang evergreen wreathes on our houses and haul green trees into our living rooms now that the green is gone from our fields. We fill our flower boxes with greens and reds. What kind of madness and folly is this? It is the madness of memory and the folly of hope. The madness of memory is that it is not bound by what the eyes see. It remembers the recurring rhythm of darkness and light, and knows that the light always follows the darkness. The folly of hope is that it strengthens and nourishes itself by things not seen. Memory and hope hold the soul above the flood of fear and the deluge of death and say, “No, it shall not be so forever, but only for now. The darkness is just for a time. The light will return.” So, in barns and sheds and kitchens and church basements, we sculpt and craft and manufacture hope with our own hands from the simplest things in the simplest ways, bending boughs of balsam into wheels of life and blending bayberry and beeswax into flames of light. We manufacture life out of death and light out of darkness. Without words or printed pages, we self-publish the good news, a testament of natural things that the light will always shine in the darkness and the darkness will never overcome it. Rank opinion You can shop till you drop, but shopping just won’t do it. More seedpods to carry around with you From Will Rogers: “Too many people spend money they haven’t earned, to buy things they don’t want, to impress people they don’t like.” And also from Will Rogers: “Common sense ain’t common.” 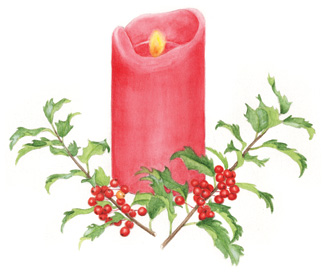 Rob McCall is a journalist, naturalist, fiddler, and for the past 22 years, has been pastor of the First Congregational Church of Blue Hill, Maine, UCC. Readers can contact him directly via e-mail: awanadjoalmanack@gmail.com or post a comment using the form below.