The high season is upon us. To continue our “Maine Summer as Kentucky Derby” metaphor from last time, we are now in the third turn and there is enough track left that we needn’t panic quite yet. The game is still on.

The short race that is summer in Maine has thundered down the backstretch but is far from over. The winners and losers are not yet decided, so pull up a rocker and let’s see what has occupied our discussions on the Porch in the early season. Marching On In an effort to continue our imitation of real reporting, we would like to follow up on our (un)coverage of the March of the Topless Females in the last issue. It seems that the University of Maine at Farmington student who wanted to stage a similar event in Farmington to protest the double standard of gender toplessness has accomplished her goal, and a march took place at the end of April. It was covered (more or less) by Channel 8 and featured at least one topless male expressing solidarity, as well as the expected voyeurs with digi-cams in hand. Comments ranged from “disgusting” to “so what?” All the news accounts have noted that Maine law allows anyone to be topless. No word on whether the mammiferous marchers heeded my recommendation that the route begin at a former dairy and end at an ice cream stand. So where do the Porch regulars land on the continuum between “disgusting” and “so what?” I stand aside, in favor of courtesy, the lubricant of society. While many of the great progressions of our society, such as civil rights, would not have moved forward without confrontation, the magic of civility can be compelling in some situations. This may be one of them. Alien Invaders Sounds like a video game from the early days of Atari, or perhaps it is the hordes of summer rusticators we love to hate or hate to love, doesn’t it? The chat on the Porch is about something else entirely: flora and fauna “from away” that threatens native species, some of which being those that we identify as part of the magic of Maine. According to an article in the Bangor Daily News, biologists with the Department of Inland Fisheries and Game report that there have been 70 illegal introductions of non-native fish species since 2006. Over the years, the issue I remember most was the introduction of bass (no relation) to formerly pristine trout and salmon waters by misguided sportsmen. Currently there is great concern about the presence of northern pike in the Belgrade lakes. “Any fish that grows to 20 or 30 pounds and has a mouth like an alligator” could destroy traditional species, according to IF&G biologist Nels Kramer. But top predators like the pike are not necessarily the big problem: remember the diseases brought to the Americas by the Europeans? They decimated native populations who had no evolved resistance. This is the possibility that really gives the biologists the willies. The current nightmare on the national front is the silver carp, brought to the southeastern U.S. to control algae in catfish ponds. Everything worked fine until flooding set the silver carp free to be all that it could be. Unfortunately, it is now knocking on the door of the Great Lakes via the Illinois River. There are so many carp that they pose a collision hazard to boaters. This thanks to an idiosyncrasy of this fish: they are driven to leap from the water by the vibration of motors operated at low to moderate speeds. Several such collisions have resulted in serious injuries. But there is some good news for those sportsmen who like violence and alcohol. In Peoria, Illinois, they can hire a guide to take them bow (as in bow-and-arrow) fishing for the mighty carp from the stern of slow-moving bass boats. I refer you to brackettoutdoors.com to view this new extreme sport. Mr. Brackett’s girlfriend received a broken jaw from a flying 15-pounder. Fortunately, she did not receive an arrow through the brain. 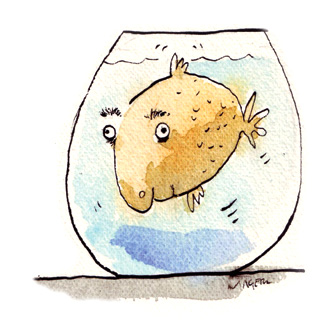 Long-time MBH&H Contributing Editor, freelance writer, and raconteur Peter Bass is an owner of Maine Cottage Furniture. Click here to read other articles by Peter Bass » A Fond Farewell: It is with sadness that we report that artist and illustrator Caroline Magerl will no longer be drawing for us on a regular basis. For more than a decade, her acerbically witty watercolors have enlivened this column, its predecessor (“In the Lee of the Boathouse” by Peter Spectre), and www.maineboats.com. She lives in Australia, where she plans to focus more on her fine art and children’s books. Stop by if you are in the neighborhood, or keep up with her progress via www.cmagerl.com.au. To submit your comments... newsy tidbits, photos, illustrations, clippings, rants, and raves for possible use in this column, use the form below. Or mail to “View From the Porch,” P.O. Box 758, Camden, ME 04843 or fax to 207-236-0811. Items may be edited for length and clarity; materials become the property of Maine Boats, Homes & Harbors, Inc.

The Maine I Love - Nate Levesque