of the awakening Earth in your nostrils

Illustration by Sam Manning.
We don’t stop playing because we grow old. We grow old because we stop playing.
—George Bernard Shaw
Dear Friends: Sunrise is getting earlier and sundown later, allowing the sun to do its life-giving work and weary Mainers to remember the nearly forgotten joys of warm days. The ospreys or “fish hawks” have returned to their favorite haunts in time for the alewive’s run. Turkey vultures ride the warm air rising from the ground as the sun brings its welcome heat; they can be recognized by their dark gray color and motionless wings that form a slight dihedral or flattened V shape at an angle to the body. They soar in wide circles, scanning the ground below for carrion. Hope it’s not you. Some snow can still be found in high and shady places and in the woods. The quacking of wood frogs is heard near vernal pools and in marshy places. Spring peepers are due any day. Have you heard them yet? Spring songs of love. For the first time in months you can actually catch the sweet aroma of earth in your nostrils. I had almost forgotten the peaceful, physical sensation this soft perfume can create in a body, like the scent of being in your mother’s arms, easing fear and giving comfort to the winter-weary soul. The Earth is awakening. Where recently the ground was hard as stone, now it gives a little to your step, like the soft flesh that it is, as the ice retreats northward where it belongs. After so many months of deathly sleep, it is stunning how fast the Earth springs back to life. Other Signs of Spring One Thursday morning about this time last year they were shoveling snow off the Academy tennis courts, and by afternoon the laughter of volleying youth could be heard. Crocuses opened and day lilies pushed up by the back door. And of course, town meetings were under way. Town meeting is one of the oldest and simplest forms of government in New England, serving us perfectly well long before any higher, more elaborate government was in place. Thomas Paine observed on his arrival in America: “I was struck with the order and decorum with which everything was conducted, and impressed with the idea, that a little more than what society naturally performed, was all the government that was necessary, and that monarchy and aristocracy were frauds and impositions upon mankind.” (Age of Reason, 1794). 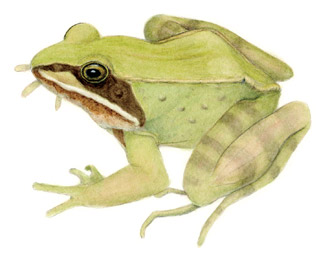 Illustrations by Candice Hutchinson [3].
Seedpod to carry around with you From journalist Elmer Davis (1890-1958): “This nation will remain the land of the free only so long as it is the home of the brave.” Field and forest report, mid April Apple trees are at the silver tip phase as their buds begin to swell. Last chance to finish your pruning and apply your dormant oil spray. Lilac buds are showing some green. Fuzzy catkins are dangling on aspen (or “popple” as it’s called around here) and the delicate red flowers of red maples are beginning to show. Finches are starting to sport their bright colors and are mingling with returning white-throated sparrows around the bird feeder. The first honeybees are active. All in all, we’re enjoying the Maine “April Vacation,” when the air is warm enough for us to be outdoors and the wretched blackflies are still unaware. Saltwater report The Rockweed Wars around Cobscook Bay continue. Some feel that harvesting rockweed damages the nurseries of periwinkles, clams, and certain fish, and that the floating rockweed left behind fouls propellers. Others feel that rockweed can provide an important local resource and can be taken sustainably. If this harvest is to be done correctly, it must be monitored by all parties. The Maine Department of Marine Resources is sorely understaffed already, so it’s up to the locals to work this out together peacefully. Let local resources be managed locally. 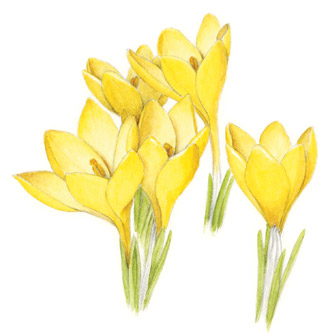 Natural events, late April The waters run all over. Brooks and streams rush, puddles and rivulets appear where none have been, ducks quack in the ditches and driveways. It is whitewater season on Maine’s rivers and streams, the destination of many a paddler’s pilgrimage. Testing oneself against a racing, roaring river is good practice for living life. Like time, the river goes only forward. One is carried by the current and must be ready to make quick decisions by watching the movement of water against rocks and boulders right ahead. The rapids and riffles must be read now; as there is little time for pondering. Hesitation or misjudgment can lead to a sudden cold bath, or worse. Sometimes one must choose between the lesser of two evils, but there is a transcendent and unspeakable exhilaration in giving oneself up to being carried by the currents of the river. I’ve paddled the Union and Machias Rivers, Kenduskeag Stream, Blue Hill Falls, and Cobscook Falls. I’ve been baptized and I’ve been saved; I’ve won and I’ve lost; and I don’t regret any of it. I dream about it night and day. While I don’t do whitewater any more, the lessons I learned are scribed on my soul: Keep your essentials in a dry bag, hold onto your boat even if you are thrown overboard, go with the flow, and don’t think too much. Saltwater report, late April These days we also launch our human-powered craft into salt water, as the inhabitants of this coast have done for thousands of years. Artifacts of the 6,000-year-old Red Paint culture appear from New Jersey to Norway indicating trans-Atlantic ocean travel millennia before the Vikings or Columbus ever set to sea. Archaeological digs in downeast Maine have revealed plummets and harpoons, and the bones of dolphin and swordfish, that are indications of long-ago deep-water fishing. Seafaring craft and skin-covered boats do not survive the acidic soils, but I have old Wabanaki designs that show great waves, four-man boats, and sea creatures as big as the boats. I’ve painted these designs on my kayaks and would be glad to share them with you. Might be good medicine. Rank Opinion We came up from the sea and we go down to the sea, but unless industrial fishing and whaling are controlled and we stop using the ocean for a toxic dump, the womb of life on earth may become its tomb. Natural events, early May As the warm May days come along, so do our six-legged relatives that have been dormant or over-wintering as eggs. Most insects need temperatures in the mid-60s to come alive. The mayfly is the adult of several species of the order Ephemeroptera, related to dragonflies and damselflies. The adults of some mayflies live for only a matter of days or hours, and clouds of them can be seen over streams and rivers, causing feeding frenzies of fish. Bumblebees, genus Bomba, and honeybees, Apis mellifera, nuzzle the flowers of red maples and dandelions. May is also the month of the blackfly, genus Simulium—Maine’s symbol and protector—emerging around May Day and starting to bite around Mother’s Day in these parts. Blackflies are related to mosquitoes, also arriving now. Like the Ephemeroptera, they lay their eggs in water and their larvae and pupae are aquatic, the adults emerging from the water in due time. And of course, moths and butterflies, order Lepidoptera, including the larvae of the tent caterpillar and the adults of the mourning cloak butterfly, are also appearing in the fields and forests. All creatures great and small are animated by the growing warmth of the sun as they welcome the month of May. And that is probably more than you wanted to know about these critters. 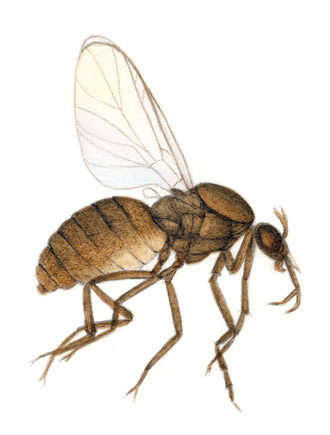