The blown-down spruce left a big hole in the sky, and in my heart.

Illustration by Sam Manning.
I would feel more optimistic about a bright future for man if he spent less time proving he can outwit Nature and more time tasting her sweetness and respecting her seniority.
—E.B. White
Dear Friends: From the summit of Awanadjo—Blue Hill, or “Small Misty Mountain” in the Algonkian language—the forests stretching off to the north, west, and south are turning brown and bare in November, just as they have every autumn since the last ice mountains melted away 12,000 years ago. Late migrating hawks and gyring eagles soar through the primordial atmosphere overhead as their ancestors have through many ice ages. The mountains around us—Acadia, the Camden Hills, Great Pond, Schoodic—rise rocky and bare in the far four directions, as they have for millions of years. The sea wears a somber gray as it curves away from our gaze and flows over the horizon to the east, just as it has for billions of years. The land below us has been inhabited by our kind for millennia, and has seen many tribes stride its paths and many flags fly above it: and will surely see still other flags in times to come. From the summit we view the town and the fairgrounds below appearing much as they have for generations. We can make out three white steeples, seemingly identical from the height upon which we stand, regardless of the differing creeds preached beneath them. We can see the tidy houses of citizens of every political persuasion all looking alike from the heights. Through time out of mind these far forests and the blueberry fields down there have turned and changed with the countless seasons, rising from root or seed; burning or falling to the ground to rise again and provide food and fruit for the myriads of creatures. The creatures have likewise gathered and planted seeds by their natural ways, borne and raised their young, taken no more than they needed, wasted nothing, and always improved the environment for every other creature. With all our art and craft, we can do no better or greater thing than this. 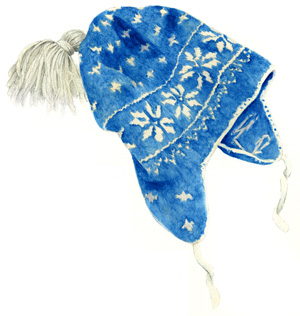 Illustrations by Candice Hutchinson [3].
Field and Forest Report, Early AugustSeedpods to Carry Around with You this November From Richard Jeffries: “The lost leaves measure our years; they are gone as the days are gone, and the bare branches speak silently of a new year….” Field and forest report, early November Winds and rains have brought down most of the leaves, except for those of the hardy red oaks. These still hang on their twigs, brown and dry as old leather, and whisper as they take the breeze. The needles of the eastern larch, also known as tamarack, or hackamatack in Algonkian, are showing their beautiful burnt gold as they prepare to fall in showers. With many nights still frost-free and many days still warm, the grass remains green and growing with an occasional dandelion shyly blooming close to the ground. Mountain report, early November On the west shoulder of Awanadjo there are shriveled blueberries, brilliant scarlet leaves of rambling rose, the occasional intrusive Russian Olive bush, and the mysterious messages etched on ancient stones by the patient scribes of time and weather. 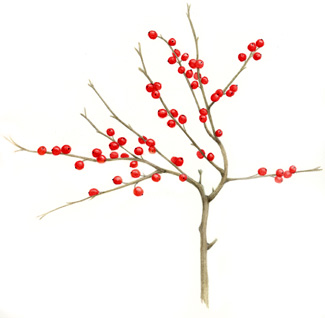 Natural events, mid to late November Colder weather flows down from the north over mountains, fields, and waters, gradually lulling the countryside to sleep with November’s slow and gentle anesthetic. The darkness lingers later each morning, and fussing parents try to put hats and gloves on their children, only to see them pulled off as soon as the door closes and the kids head for the school bus. Oldsters spend more time in their favorite chair by the wood stove. The birdbath freezes and thaws: then it stays frozen all through one day and into the next. In shady places to the north of the house or of a row of trees, the cold sinks deeper into the ground and raises it up in crystals that crunch under foot. Frost coats the windows during the night, turning them into stained glass, holding the glories of sunrise, until the warming light sends trickles down the panes, and they clear again. Puddles freeze over and roofs are rimed with white as the waning moon fades and falls in the west. Jack o’ lanterns freeze and thaw and turn to pumpkin pudding, their jolly October smiles melting into grotesque November scowls in their unlit empty heads. Field and forest report, mid to late November Tippers work away in the woods and wreath-makers labor indoors, enveloped in the sweet scent of balsam while their hands turn black with sticky rosin. Hunters park off the highway and head down woods roads in quest of the Legendary Buck they’ve dreamed about since their youth: six feet high at the shoulder, with antlers as wide as the tree-tops and a call like God’s trombones. The wild turkeys stay close to the big woods hoping to cut their losses. Winterberry, Ilex verticillata, our native holly, offers up deep-orange berries in airy arches and spires over bare branches. Flocks of robins feast on the berries in the warmth of the day, chirping happily as though summer had not died. Mountain report, late November Ribbons of run-off freeze on the woods trails and over rock. The red squirrels cease their scolding at intruders and spend most of the day in their leaf-lined nests in the hollows of dead snags, dreaming and contemplating the Squirrel Dharma. The wind on the bare, ice-scoured summit bites the face. Fewer climbers make the ascent these days and a man can find some real solitude with his thoughts as he makes his way up the slope while his earthly troubles slough off and blow away. Field and forest report, Thanksgiving Last year I saw a huge wild Tom turkey run across the road above Walker’s Pond. He looked nearly as big as an ostrich, with red head and wattles and stiff black bristles sticking out from his chest. Why does a turkey cross the road? To give thanks when it gets to the other side. A Thanksgiving message from Erma Bombeck “Thanksgiving dinners take 18 hours to prepare. They are consumed in 12 minutes. Half-times take 12 minutes. This is not a coincidence.” Saltwater report, late November The last lobster traps are hauled while the fish move out to deeper and warmer waters. Meanwhile, experts continue to report that at the present rate the world’s major commercial fishing stocks will have collapsed by mid-century. There are things you and I can do about it, however. We can support local resource management in which fishermen are involved in determining when, where, and what will be fished. We can also eat less larger fish and more smaller ones, such as herring and mackerel. These also contain less mercury and other pollutants and more healthy omega fats. Bring on the sardines. 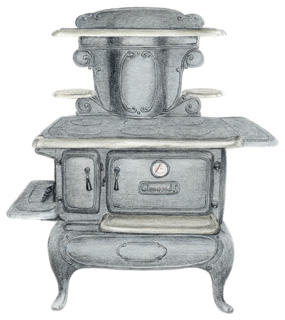 Rob McCall is a journalist, naturalist, fiddler, and for the past 23 years, pastor of The First Congregational Church of Blue Hill, Maine, UCC. This almanack is excerpted from transcripts of his weekly radio show, which can be heard on WERU, 89.9 FM Blue Hill and 102.9 FM Bangor, and streamed live via www.weru.org. Readers can contact him directly via e-mail: awanadjoalmanack@gmail.com.