Illustration by Caroline Magerl.
So here we are in August, our summer-days bank account half empty. Have we spent it well, or have we, in despair over economic woes, left the boat on the beach or not rented that cottage for those two special weeks? As home furnishings retailers, my associates and I are intimately and acutely familiar with the difficult sectors of the economy; we often compete with the decision to buy a car or go on a vacation. I counter with the following: “It is Maine, and this is summer.” My son and his family live in Boulder, Colorado. The New York Times ran an article about Boulder some months ago entitled something like, “Boulder, 25 square miles surrounded by reality.” Boulder may be a bubble that doesn’t exist in Maine at the moment for those making a living here, but the headline speaks to a mental vacation that we can all take from our cares. This is the High Season: the flavors are concentrated, the main course is served. Whatever our circumstances, a summer day in Maine is an overflowing richness that no one can take away. Have a lobster, a burger, or a Bud. Or in my case, all of the above. Reality is still a few days away. We’ve been busy on the porch these past months, so have a seat. 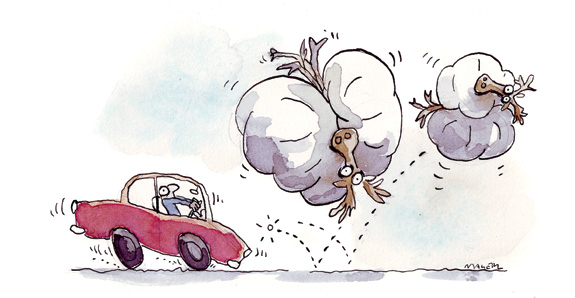 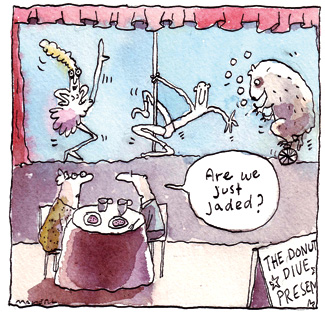 Illustration by Caroline Magerl.
Meanwhile, back in Vassalboro Maine and the nation have enjoyed the ongoing public debate in Vassalboro regarding the operation of the Grand View, a topless coffee shop, and the owner’s most recent plan to expand the operation to include what the trade refers to as “exotic dancing.” The troubles that the good folks of Vassalboro have endured, both from the existence of the business itself and the unwanted national press exposure it has caused, have prompted other towns and cities to examine their own codes to prevent similar businesses from opening due to the absence of ordinances to the contrary. At this writing, for example, Waterville officials have cast their eyes on the matter. Just as young men when I was one claimed they read πlayboy for the articles, I am sure that some patrons claim they go to Vassalboro for the doughnuts or the coffee. If the food and drink were that good, one would think the shop would have a nice take-out business, too. Maybe there’s a drive-through? Let me know. This just in: “Arson destroys the Grand View Coffee Shop.” As we write, it appears that some self-righteous vigilante decided to express himself with fire instead of through the local political process. The fire nearly cost lives as well as property. The owner says he is determined to rebuild, and the arsonist remains at large. No winners here. The Mothball Fleet Many boat owners might remember 2009 as the year they left their boats on the beach. In spite of optimistic press releases to the contrary (a Boat/US member survey indicated that less than one percent of respondents would not go boating this year), the number of boats still in winter cocoons in mid-June belies such reports. During flush times, the boats still high and dry in midsummer fell into two categories: Broken Dreams, and what I call the Children of Divorce, disputed assets waiting for another dreamer. To these we now add a new group, The Mothball Fleet of the Temporarily Impecunious. As a one-time contributor to all three groups of the “hard ground navy,” I know that there is a story behind each one, many with a happy ending. Let’s hope so. Blame Canada Here on the porch, we are always on guard for any sign that summer might be slipping away. Sometime in the third week of August a cold front moves through, and the cool air mass behind it reminds us why we don’t annex Canada. It is also the two-minute warning, the bell lap, the five-minute gun, the reminder of the short and priceless nature of a Maine summer. For those whose financial circumstances and lack of school-age children allow leisure in the fall, September can be a bonus month. Those from away are learning what we have long known: September can often be the best month; the water is warm, the sailing breezes are more dependable, and the days are so clear that the view from Cadillac, Battie, or Morse mountains can be a religious experience. If this magazine were not “The Magazine of the Coast,” I would argue that the Best View in the State of Maine is from the top of Mt. Kineo on Moosehead Lake. But wait, someone else on the porch is blathering on about her idea of the Best View in the State of Maine. So excuse me, I have someone to straighten out. Feet up, binoculars at the ready.